As John Paul Jones, captain of the Bonhomme Richard, prepared to face two British ships off Flamborough Head on the coast of England on September 23, 1779, he had some very interesting allies on board his ship. The 137 marines serving on the ship with Jones were members of the Infanterie Irlandaise (the Irish Brigade of France), Regiment de Walsh-Serrant.

These men were "Wild Geese," members of a brigade that had existed in the French army for almost a century at that point. Made up of Irish exiles, some recent and some the descendants of men who had gone to France over the last 100 years, the Irish Brigade had compiled a proud and valiant history in service to the French monarchy over the years.

Jones was docked in L'Orient on the French coast, in May 1779 when John Adams, American commissioner to France, came to visit. After a dinner for Adams, hosted by Jones, both men were led on a review of the Irish Brigade marines by Captain McCarthy, of the Irish Brigade. Adams later noted that the members of the Irish Brigade in France dressed in red, just like the British army. This they did to remind the English that they, the Jacobites, supporters of the legitimate monarchs of England, the Stuarts, had more right to wear those colors than did those supporting George the Elector of Hanover.

Always eager to confront the English oppressors of their people where ever they could find them, the Irish marines, who had been serving on a French ship, jumped at the chance to transfer to the Bohomme Richard when given the opportunity. No doubt, the Irishmen expected Jones to be heading out to sea in search of fight soon; they were not disappointed. Jones had begun to establish his reputation as a fighter just over a year before, on April 24, 1778, when he became the first American to capture a British warship. While commanding the U.S.S. Ranger, he beat the H.M.S. Drake off Carrickfergus on the Irish coast and took it to the continent as prize. Now he was in command of the Bonhomme Richard, a converted French merchant ship formerly called Duc De Duras, a ship that was somewhat less than state of the art. This did not dissuade him, however, and on August 14 they set sail for English waters.

On the 23rd of September, the Irish marines got their chance to confront their ancient enemies on the high seas. There, off the English coast, Jones and the Bonhomme Richard engaged the English ships Serapis and Countess of Scarborough. The ensuing sea battle was one of the most memorable in American history. In the middle of the battle, with the ships so close it was possible to communicate between them, the English captained asked Jones if he was striking his colors. Jones reply is one of the best known in naval history, "I have not yet begun to fight." Jones, and his Irish marines, as well, was as good as his word. Soon, the Richard and the Serapis were lashed together exchanging broadsides.

The fight continued for almost four hours. Both ships were heavily damaged during the battle. Finally a grenade thrown by one of the Irish marines exploded in an ammunition magazine on the Serapis, set her gun deck on fire, and the ship, still lashed to the Bonhomme Richard, was surrendered to Jones. Unfortunately, although the British had surrendered, Jones' ship was in even worse condition than theirs. Jones was forced to transfer all his men over to the Serapis. The Bonhomme Richard sank shortly, and Jones and his victorious Irish marines sailed their prize to Holland. The Countess of Scarborough had also been captured by the other ships in Jones' small fleet and sailed in along with the Serapis.

To this day, it remains one of the most memorable victories in the history of the U.S. Navy. From that day forward, John Paul Jones position in American history was secured. Not so well known, unfortunately, is the story of the contribution of those Irish marines to that memorable victory at sea which contributed so much to the cause of American Independence. Who could say what the final outcome of that battle may have been were it not for the strong right arm of one Irishman. 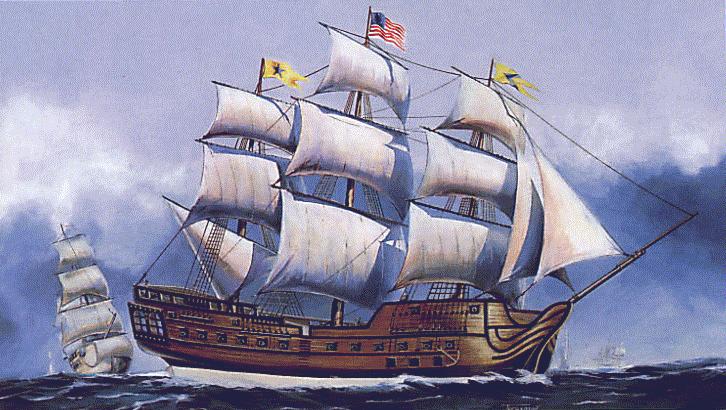 This may be the wreck of the Bonhomme Richard.