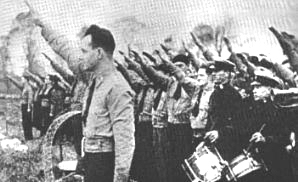 CÉADAOIN -- On Oct. 30, 1892, Eoin O'Duffy, revolutionary and organizer of the infamous Blueshirts, was born in Castleblayney, County Monaghan.

O'Duffy was apprenticed to an engineer in his youth and then worked as an auctioneer for a time. He joined the IRA in 1917 and was attached to headquarters staff during the War of Independence. O'Duffy supported the Treaty in 1922 and became the commissioner of the Free State police force, the Civic Guard, whose name was later changed to Garda Siochána. He held that post until 1933, when he was dismissed by de Valera. O'Duffy is most remembered for his life from this point. He became head of a veterans group then called the Army Comrades Association. O'Duffy changed its name to 'National Guard' and began to stage fascist-style rallies and adopted a fascist salute. Its members began to wear blue uniform shirts and became known as the Blueshirts. The militantly Catholic O'Duffy began attacking the government and accusing everyone of being communists, including the IRA. When government opposition groups formed Fine Gael in September 1933, he became its first president, reaching the apex of his political power. Subsequently, the government banned his National Guard, as well as the group he created to replace it, the Young Ireland Association, which he in turn replaced with the League of Youth, but their blue shirts indicated its continued fascist ideology. Fine Gael's other leaders soon tired of his inflammatory rhetoric and the frequent violent behavior of the Blueshirts, but were still surprised when their opposition caused him to resign his party leadership in September 1934. He was then ousted as leader of the Blueshirts as well, but did retain a small loyal following. In 1936, O'Duffy led about 600 to 700 of those followers to Spain to fight for Generalissimo Francisco Franco, the leader of an insurrection against Spain's popularly elected left-wing government. O'Duffy 's men saw little action there, returning a year later. O'Duffy's view of the fight against "godless" communism is summed up in the book "Crusade in Spain," which O'Duffy wrote in 1938 about his experience in Spain. He took no further part in Irish politics and died Nov. 30, 1944. In spite of his later politics, he was given a state funeral for his earlier contributions to the Irish government.

AOINE -- On the morning of Nov. 1, 1920, two masses were celebrated at an altar that 18-year-old IRA member Kevin Barry had constructed in his jail cell in Mountjoy Jail in Dublin. Barry was then led out of his cell by British soldiers and hanged.

SATHAIRN -- On Nov. 2, 1920, James Daly was killed by a British firing squad in India. Daly had been one of the leaders of the so-called "India Mutiny," but had not been among its instigators. The mutiny began May 28, 1920, led by Joseph Hawes at Wellington barracks in Jullundar, India, when 350 Irish members of the famous Connaught Rangers regiment of the British army laid down their arms and refused to keep soldiering as long as British troops remained in Ireland.

Eventually, 61 Rangers were convicted by courts martial and 14 sentenced to death. All but one of those condemned men had their sentences reduced. James Daly of Tyrellspass, County Westmeath, was the only one shot. The Connaught Rangers would not survive much longer than Daly; in 1922 the regiment was disbanded after the signing of the Anglo-Irish treaty that created the Irish Free State.

29, 1885 – Confederate Civil War Gen. Joseph Finegan, from Co. Monaghan, dies in Rutledge, Fla.
31, 1996 - Teilifís na Gaeilge (TnaG), the first Irish-language television station, opens in Baile na hAbhann, Co. Galway.
31 - Samhain - The beginning of winter on the Celtic calendar - A night when the "Otherworld" was powerful and the dead were able to come back and visit - the origin of Halloween

1798 – Father Andrew Conroy of Laherdane is hung in Castlebar, Co. Mayo for aiding Gen. Humbert’s French troops.
1, Celtic New Year.
1, 1851 - The Adjutant General of the state of New York issues General Order 489, providing for the formation of a militia regiment that would come to be known as the 69th New York.
1, 1920 - Kevin Barry executed.
1, 1884 - Founding of the Gaelic Athletic Association.
1, 1920 – Black & Tans shoot and kill 23-year-old pregnant mother Eileen Quinn in Kiltartan, Co. Galway as she sits in front of her house with an infant on her lap.
1, 1920 - George Lennon and the West Waterford flying column ambush the 2nd Hampshire Regiment at Piltown Cross, Co. Waterford.
2, 1920 - James Daly of Connaught Rangers executed for mutiny in India.