This Week in the History of the Irish: November 1 - November 7

DOMHNAIGH-- On the morning of Nov. 1, 1920, two masses were celebrated at an altar that 18-year-old IRA member Kevin Barry had constructed in his jail cell in Mountjoy Jail in Dublin. Barry was then led out of his cell by British soldiers and hanged.

Six weeks earlier, on Sept. 20, Barry had taken part in an IRA raid in Dublin which had gone terribly wrong and resulted in a gunfight with British soldiers in which three soldiers were killed. In the weeks since then, he had been tortured in an attempt to get him to name other IRA members, but he never relinquished their names.

LUAIN -- On Nov. 2, 1920, James Daly was killed by a British firing squad in India. Daly had been one of the leaders of the so-called "India Mutiny," but had not been among its instigators. The mutiny began May 28, 1920, led by Joseph Hawes at Wellington barracks in Jullundar, India, when 350 Irish members of the famous Connaught Rangers regiment of the British army laid down their arms and refused to keep soldiering as long as British troops remained in Ireland.

Eventually, 61 Rangers were convicted by courts-martial and 14 sentenced to death. All but one of those condemned men had their sentences reduced. James Daly of Tyrellspass, County Westmeath, was the only one shot. The Connaught Rangers would not survive much longer than Daly; in 1922 the regiment was disbanded after the signing of the Anglo-Irish treaty that created the Irish Free State. , Young Irelander, and Irish patriot, was born in Comnish, County Derry. John was the son of a Presbyterian minister. He obtained a law degree from Trinity College, Dublin, in 1834, and worked in a law office in Banbridge, County Down, where he eventually came into conflict with the local Orange Order. 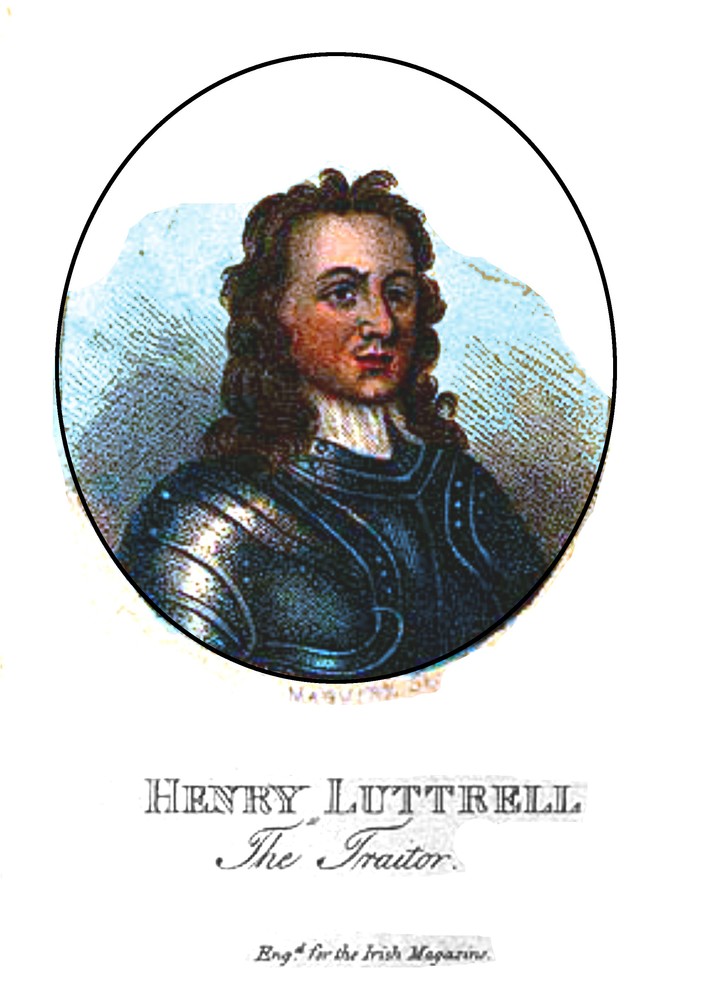 MÁIRT -- On Nov. 3, 1717, Henry Luttrell, soldier and suspected betrayer of the Jacobites

in Ireland during the Williamite War. Sarsfield, a long time friend of Luttrell's, considered him one of his best commanders. At Aughrim in July 1691, Luttrell's troops failed to hold a vital causeway on the Franco-Irish left flank. Though many military historians would say his force was simply not large enough to hold the position and was unsupported by others who might have come to his aid, Luttrell's later conduct caused his actions at Aughrim to be questioned.

In Limerick on August 2, Sarsfield discovered a letter from a Williamite officer to Luttrell regarding discussions they had had during a truce about possible surrender terms. It is probable that Luttrell entered into these discussions in an innocent manner, but when Irish commander Richard Talbot (the Duke of Tyrconnell, who was no friend of Luttrell's) learned of this letter, he had Luttrell court-martialed. He was found innocent, but after the surrender of Limerick, he was one of the few Irish officers who went over to the English side rather than following his old friend Sarsfield into exile in France.

DEARDAOIN -- On the morning of Nov. 5, 1688, William of Orange, King of the Netherlands and son-in-law of King James II of England, arrived in Brixham, England, with a large Dutch army. He had been invited by the Protestant noblemen of the country to come and usurp the English throne. Led by Lord Monmouth, a group of Protestant nobles had unsuccessfully attempted to prevent the Catholic James from ascending to the throne on the death of Charles II in 1685. Since then James had been disturbing the Protestant noblemen who had remained loyal to him in '85 by giving Catholics more and more freedoms in both England and Ireland; on May 7, 1688, he issued a 'Declaration of Indulgence' pledging religious toleration.

(Right: Linen Hall Library: Portrait of William of Orange by an unknown artist.)

Anyone know where I might get a sketch of abolitionist  William Edward Shannon, a native of Ballina, Co Mayo, or failing that an illustration to enhance a project I am researching on him?

Corning NY Journal 1847-1854 Grayscale - 0416.pdf from https://fultonhistory.com/Fulton.html for the obituary.

There is a button for 'request photo' at find a grave.