DOMHNAIGH -- On May 2, 1870, Father Francis Duffy, World War I chaplain of the 69th New York, was born in Cobourg, Ontario. Francis moved to New York at age 22 to teach at St. Francis Xavier College but quit to enter the seminary. Father Duffy became well known around the town as an editor of the Catholic New York Review and later as the chaplain of the 69th New York National Guard, the famous "Fighting 69th." When the 69th went off to France in 1917 (redesignated the 165th Infantry by the Federal government), the 46-year-old Duffy went with them. 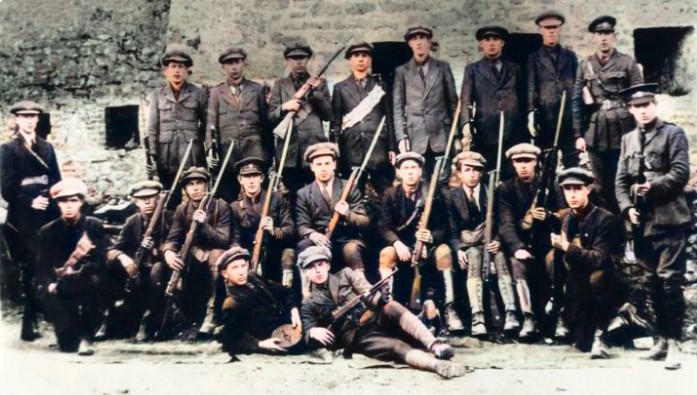 LUAIN -- On May 3, 1921, the South Mayo Brigade of the Irish Volunteers, commanded by Tom Maguire, ambushed an RIC / Black and Tan supply column of a Crossley tender and a Ford car at Tourmakeady, Co. Mayo on the western shore of Lough Mask. This was the 2nd in a series of major attacks on crown forces in the county in the spring of 1921. It was all part of Michael Collins' plan to bring the revolution to every county in Ireland and convince the British government the war was unwinnable.

(Left: The South Mayo Brigade. Maguire is standing on the left with #10 over his head.)

The Volunteers had gotten word that these vehicles were on their way from Ballinrobe to Derrypark RIC station and were lying wait for them. Maguire had perhaps as many as 60 Volunteers with him, but as was so often the case in those days, they didn’t have enough weapons, perhaps 6 or 8 rifles and some shotguns and not much ammunition for them. Maguire split his force into three sections, commanding one himself with the second under Michael O’Brien and the third under Paddy May, with May’s section blocking the road and the other two on the high ground to the west of the road. When they opened fire the four men in the Ford were killed or mortally wounded, but those in the Crossley tender were able to take cover in the nearby hotel.  Expecting that help would be coming from the British military, Maguire withdrew his men west in the Partry Mountains. Some British reinforcements did, indeed, make their way into the area trying to engage the Volunteers, but how many is in dispute. The Volunteers would claim it was hundreds, while the British claimed it was less than a hundred. Whatever the true number of British that were closing in, they confronted each other in the mountains. O’Brien was killed in the skirmish there and Maguire was severely wounded in the arm. But the column snuck by the British in the dark and escaped and Maguire was able to find shelter in some local homes and avoided capture. Many homes in the area would be burned as a result of this ambush, and they also burned Maguire’s in Cross.

MÁIRT -- On May 4, 1916, the British executed Patrick Pearse's younger brother, Willie. Willie was not one of the signers of the Proclamation; he was not one of the planners of the revolt, nor was he one of it commanders. Willie was merely one of the soldiers involved with the Dublin actions. No other participant in Dublin whose actions or responsibilities were similar to Willie's was executed in those dark days, save perhaps John MacBride, and MacBride's earlier service with the Boers probably marked him for death. It seems likely that the sole reason William Pearse was executed by the British government was for the crime of being Patrick's brother. It was repugnant British excesses such as this that would soon reverse the Irish people's initially negative opinion of the '16 Rising.

AOINE -- On May 7, 1915, the English passenger ship Lusitania was sunk near Old Head, Co. Cork, off the southern Irish coast. The liner had left New York bound for Liverpool on May 1. German intelligence believed, and most historians now believe, that the ship was carrying munitions.

SATHAIRN -- On May 8, 1857, William Brown, of Foxford, Co. Mayo, an Admiral in the Argentine navy, died in Buenos Aires. Brown first came to the New World as a boy, when his family immigrated to the United States in 1786. He later went to sea on a merchant ship. Pressed into the British navy in 1796, he would eventually rise to command a British merchant ship. Brown settled in Buenos Aires and in 1814 he joined the fledgling navy of the Argentine Republic.

For myself, I cannot claim any special attribute except that of being fond of people – just people.'

Thank you for the interesting profiles . So many brave souls in Ireland and abroad .Never knew much of this history.
Thank you.