Of all the great men and women of that era, was there a more gallant figure than Joseph Mary Plunkett, or a more hopeless love than that of Plunkett and Grace Gifford? They were to be married in a church on St Stephen’s Green on April 23, Easter Sunday, 1916, but history intervened.

Joseph Plunkett is certainly best remembered today for his part in the Easter Rising; he was the youngest of the seven signatories of the Proclamation, but in addition to being an ardent nationalist, he was also a poet of considerable talent and a journalist.

He was born on November 21, 1887, on Upper Fitzwilliam Street, in one of Dublin’s more affluent neighborhoods, the second of seven children. Although he was born into a wealthy family (his father was a papal count), his life was not easy: he contacted tuberculosis as a young child, which affected him all the remainder of his short life. He was not always given the best treatment for his condition, and sometimes underwent medical procedures that made him sicker. As a result, he spent a lot of time sick in bed as a child and youth, but he didn’t squander that time; he had many interests and read about photography, radio and other new technologies. He also learned Esperanto, another of his modern interests - it had been introduced the year he was born. As part of the effort to ease his suffering from TB, he later spent time traveling in Italy, Algeria, and Egypt, where the climate was thought to be more salubrious to his condition. This was likely between 1909 and 1911.

Plunkett was educated at the Catholic University School (run by the Marists since the 1860’s), a few blocks from his birthplace and from St Stephen’s Green, and at Belvedere College, in Great Denmark Street, and Stonyhurst College in Lancashire (both Jesuit institutions). It was at the latter of these he wrote his first poems and became interested in mystics such as St John of the Cross and St Teresa of Avila.

At home, with his younger brothers, he often played a military strategy game called “Little Wars”, which had been devised by H G Wells. In addition he read military history widely. These interests helped prepare him for the part he would play on the IRB’s (Irish Republican Brotherhood) military council.

His family all took a strong interest in the Irish Nationalist movement, and young Joseph Plunkett was active in the cultural revival sweeping through Ireland at the turn of the century. As part of this interest, he began learning Irish, and when early in 1909 he advertised in a paper for a teacher, his ad was answered by Thomas MacDonagh, and a great friendship was born.  Born in 1878, MacDonagh was almost a decade older than Plunkett.  Thomas would marry Muriel Gifford in January 1912.

Joseph Plunkett and Thomas Macdonagh were both poets, and his older friend helped Joseph publish his first book of poetry, “The Circle and the Sword”, in 1912. The two men also worked together on “The Irish Review”, a literary journal, which Plunkett took over within a year, and which grew increasingly militant, as Plunkett, P Pearse (who was a contributor) and others’ disillusionment grew.

Plunkett joined the Irish Volunteers and soon found himself on several committees. Around this same time he became involved with the Irish Republican Brotherhood, and a part of its Military Committee, along with Pearse and Eamonn Ceannt. His military expertise was respected by the older leaders, and his input into the planning of the Rising was substantial. Plunkett moved to Larkfield, a family-owned estate a few miles west of Dublin, and it soon became a hub of revolutionary activities. It was used a training center, and a storage place for guns and ammunition.

In keeping with the maxim, “England’s difficulty is Ireland’s opportunity”, when the Great War began, Plunkett went to the Continent to ask the Germans for weapons, as they were fighting a common enemy.  He set out on March 17, 1915; his illness provided a cover for his movements. His trip to Germany lasted three months in all.  Later that year he traveled to America to meet with an Irish organization sympathetic to the Republican cause. On his return he became engaged to Grace, and a date, April 23, was set for their wedding. While he must have known Grace since at least 1910, they only became engaged in early December, 1915.

A few weeks before the scheduled Rising, he underwent an operation on glands in his throat, a complication caused by the TB. Following this, meetings of the military council were often held by his bedside. Shortly after, Joseph Plunkett, whose doctors had given him only a fortnight to live, rose from his sick bed to take his part in the Rising.

The Rising began on Monday, April 24, not on Sunday as had been planned. Plunkett showed up at the GPO wearing a white silk scarf and carrying a saber, a flamboyant gesture typical of him, and accompanied by Michael Collins, who served as his aide de camp. (One source said that this saber had belonged to Robert Emmet.) His condition worsened during the five days of occupying the GPO. The following is a quotation from James Connolly’s son:

“I asked my father who this man was. I thought he was rather out of place lying down on a mattress in the middle of a revolution.  I didn’t think that he was much of a leader.  And I remember [my father, James Connolly said]   ‘That’s Joe Plunkett, and he has more courage in his little finger than all the other leaders combined.’ ” (Bear in mind, please, it is not my intent to give a history of the Rising here, rather just what details seem most necessary.)

By Friday the men holding the GPO, Plunkett among them, decided they had to abandon their position there, and so made their way to Moore Street. It was here, on Saturday, April 29, that he wrote what he expected to be his last letter to Grace. After the surrender, he was tried and sentenced to death for his part in the Rising. At 8 p.m. May 3, he and Grace were married in the chapel in Kilmainham Gaol, where the only witnesses were British soldiers with bayonets fixed. He was executed a few hours later. Just before he faced the firing squad, on May 4, 1916, he said “I am very happy I am dying for the glory of God and the honour of Ireland.”

(Right: The chapel at Kilmainham Gaol)

Here is an apt passage from one of his poems:

Rougher than Death the road I choose
Yet shall my feet not walk astray,
Though dark, my way I shall not lose
For this way is the darkest way.

Grace Eveleen Gifford was an artist and a cartoonist/caricaturist who is mainly remembered today for marrying her fiancé, Joseph Plunkett, just a few hours before he was executed.

She was born on March 4, 1888, the eleventh of 12 children of a wealthy attorney. Her Protestant mother and Catholic father raised their sons in their father’s faith, and the daughters in their mother’s.

At the age of 16, she went to the Dublin Metropolitan School of Art, where she studied under the Irish artist William Orpen, who regarded Grace as one of his most talented pupils. He often sketched Grace and eventually painted her as one of his subjects for a series on 'Young Ireland'. At around this time, Grace's talent for caricature was discovered and developed. In 1907 she attended a full-time course in Fine Art at the Slade School of Art in London. She returned to Dublin in 1908 and tried to make a living as a caricaturist, publishing her cartoons in “Irish Life”, “Meadowstreet” and “The Irish Review”, which was edited from 1913 by Joseph Plunkett. She considered emigrating but gave up the idea. When Grace attended the opening of the new bilingual St Enda's School (founded by Padraic Pearse) in Ranelagh, Dublin, she met Joseph Plunkett for the first time and came into contact with the future leaders of the 1916 Easter Rising, including Thomas MacDonagh, whom Grace's sister, Muriel, later married.

On April 7, 1916, Grace Gifford was baptized a Catholic. In doing this she followed in her sister, Muriel’s, path. Joseph checked himself out of a nursing home on Mountjoy Square in order to attend the ceremony.  The wedding was to be on April 23, but in the flurry of events it almost didn’t happen.

As the widow of the heroic Plunkett, Grace played her part in the wars that followed, including the Civil War, and was arrested in February, 1923, and imprisoned in Kilmainham. She was there for three months and painted pictures of a religious nature on her cell walls.

She had difficulty supporting herself afterward, until in 1932 she received a Civil List pension from Éamon de Valera's government. The will that Joseph Plunkett had made, leaving her everything he had, was not honored by his parents, and she began legal proceedings against them in 1934.

She never married again and died alone in 1955. She was buried with full military honors and the president attended her funeral.

Their poignant story was commemorated in an oft-recorded song, “Grace”, written in 1985 by Frank and Seán O'Meara. 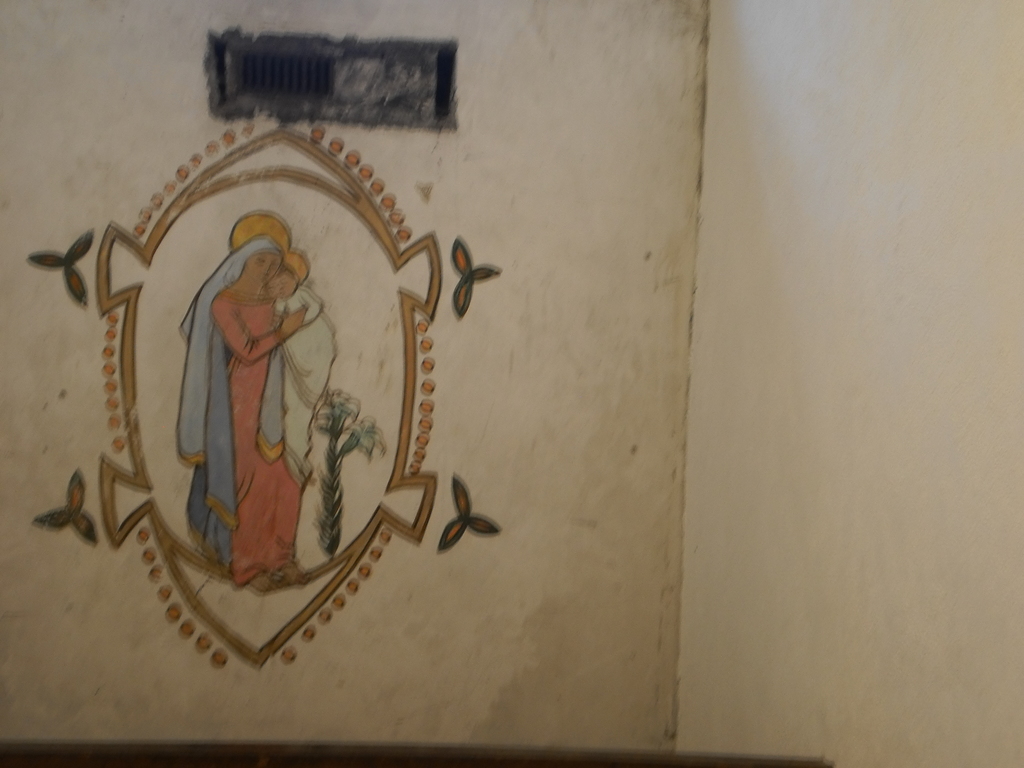 Here is a photo I took during my tour of Kilmainham Gaol, in August 2012, of a painting Grace Plunkett made on her cell wall.

My main source: Seachtar Na Casca – 7 part documentary about the Seven Signatories, narrated (in Irish) by Brendan Gleeson. I re-watched the segment on Joseph Plunkett several times and re-phrased whatever I used, but I am not citing the different people who contributed to this program.

I tried to avoid Wikipedia, but I ended up using it for Grace’s story. I checked information about his education, which did not appear in the documentary. For example, a website devoted to Easter 1916 says he was “educated by the Jesuits at” and then lists all three schools, whereas the first was run by Marists. I could find no info on how long he was at each school.  I also read that he (only) worked on the Review, and elsewhere that he was one of the co-founders as well.  When in doubt, I used what I found in the documentary.

Other source material I used and links that may be of interest:

A selection of Plunkett’s poems

This work, Susan, elicits my admiration. The attention to detail, and sources, I find highly commendable, along with the skillful writing evidenced. Two great, interesecting, complementary narratives, and we are vastly the richer for your efforts. Go raibh maith agat!

Thanks so much, Gerry. I really appreciate your comments. I put some time into this, as I wanted to do my subjects justice. What was frustrating was lack of material, especially on Grace, but having watched the documentary series, I felt I had some insight into each of the Signatories.

Comment by Douglas Lawless on May 6, 2020 at 8:42am
Thank you for writing. I believe that documentary on the Easter rising leaders is on Amazon prime video.