MÁIRT -- On May 15, 1847, The Syria, the first ship to arrive during what Quebecois would call the 'Summer of Sorrow,' landed at the Canadian quarantine station in the St. Lawrence River, just north of Quebec. The French had called that island 'Grosse Ile,' but since 1847 many have called it 'L'Ile des Irlandais.' The first victim died on the day The Syria arrived. She was only four years old; her name was Ellen Kane, from Kilmore in County Mayo. Within six days, 202 of the ship's 241 passengers were ill. The island's hospital was built for 200 patients; the very first ship of the year had filled it to capacity. Hundreds more of these coffin ships would arrive before the year was out, each filled with passengers as sick as those on The Syria. English landlords were in the process of clearing the sick and starving from their lands; sheep were profitable, the Irish were expensive and disposable. It was "Black '47," and a long summer nightmare of despair was just beginning for those on Grosse Ile, and for the thousands en route. The island today is a monument to the Irish who suffered and died there. DEARDAOIN -- On May 17-18, 1918, the British government began arresting all the leaders of Sinn Fein that it could round-up. Britain desperately wanted to impose conscription on the Irish to replace its tremendous losses in the trenches of Europe; Sinn Fein was adamantly opposed to more Irishmen being used as cannon fodder in service to their oppressors. The British answer to this resistance was the one that had used so often before in Ireland: coercion. De Valera, Griffith, Constance Markiewicz and other many other leaders were all eventually imprisoned. The British cover for these arrests was a bogus 'German Plot,' which has since been thoroughly discredited. The British would live to regret one man who slipped through their fingers that spring; Michael Collins would use the months he might have spent in an English prison assembling an intelligence organization that would soon make the 'Empira' squeal.

, military leader of the United Irishmen, was captured by the British in Dublin. From one of the most distinguished families in Ireland, a descendant of 'Silken Thomas' Fitzgerald, who was executed by the British in 1537, and brother of the Duke of Leinster, Lord Edward had served in the British army against the American colonists during the American Revolution. He spent time in Paris after the war, where one of his companions was American political theorist Thomas Paine 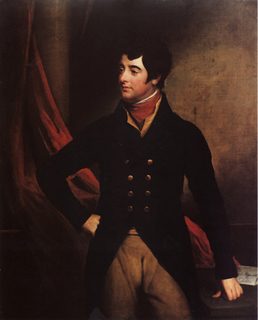 'You may as well declare war on Ireland and be done with it. And it will be a futile war. It will take three English army corps to get one Irish corps out of the country. And in the process you will destroy the Irish Parliamentary Party. You are driving millions of the best men of our race to turn their eyes from this Parliament forever.'

-- An Irish member of Parliament on the "Man-Power" bill, which called for conscription in Ireland

'What a noble fellow. Of the first family of Ireland, with an easy fortune, a beautiful wife, a family of lovely children, the certainty of a splendid appointment under the government, if he would condescend to support their measures; he has devoted himself wholly to the emancipation of his country.'
-- United Irish commander Theobald Wolfe Tone commenting on Lord Edward Fitzgerald (right) in his diary