, was born, possibly somewhere in Ireland. Son of a veteran of the American Civil War's famed Irish Brigade, young William left Washington, D.C., in 1879 hoping to find excitement in the Arizona territories. He found enough for three men.

He won fame during many exploits against outlaws as a sheriff and eventually won an election for mayor of Prescott. At the start of the Spanish-American War, O'Neill -- nicknamed 'Buckey' after his favorite card game -- raised a company for Teddy Roosevelt's Rough Riders. It was then that he first listed his birthplace as Ireland, after years of claiming U.S. birth. 'Buckey' O'Neill was one of the most popular men, enlisted or officer, in Roosevelt's regiment. He was killed just before the regiment's famous assault up Kettle Hill (not San Juan Hill) LUAIN -- On February 3, 1537, Lord "Silken" Thomas Fitzgerald and his five uncles were executed at Tyburn, England. In June 1534, believing the English had killed his father in London (he actually died in the Tower later, of disease), Fitzgerald led a revolt against the English. He gained the name 'Silken' for the silk fringes on the helmets of his horsemen. Thomas had over estimated the support for actions, however. His attempt to get Lord Butler, son of the Earl of Ormond, his cousin, to join him in the uprising failed. His forces were defeated at Dublin and forced to retreat to their strongholds in County Kildare. When his castle at Maynooth was taken while he was away seeking reinforcements in March 1535 he was driven from his lands in County Kildare. In July, Fitzgerald surrendered to Lord Leonard Grey, England's Marshal of Ireland, after Grey guaranteed the safety of Fitzgerald and his men. But in October 1535, the English broke their promise. Thomas Fitzgerald and five of his uncles were shipped to London and imprisoned in the Tower until February 1537, when all six were hung, drawn and quartered. MÁIRT -- On February 4, 1860, Spanish General Don Leopoldo O'Donnell y Jorris, 1st Duke of Tétuan, 1st Count of Lucena, 1st Viscount of Aliaga, won the battle of Tétuan in Spain's war against Morocco. Leopoldo was descended from a long line of O'Donnells in Spain, who had been there since the Williamite wars. In Ireland, it was said that he was a direct descendant of Calvagh O'Donnell, a 16th-century chief of the O'Donnell clan. He was involved in various political intrigues in Spain during the 1830s and 40s, a period during which his prospects rose and fell. By the late '50s, he had risen to be prime minister, a position he would hold on three separate occasions. In late 1859, while holding the office of prime minister he personally took command of the Spanish army in its invasion of Morocco. O'Donnell split his army into three corps and marched on Tétuan. The Spanish army, around 30,000 men, faced 40,000 Moroccans entrenched around Tétuan. That numerical disadvantage was overcome by the Spanish artillery, which drove the Moroccans out of their entrenchments and into the city with heavy casualties during the battle on the 4th. On the 6th, their position now untenable, the city surrendered to him. O'Donnell returned to Spain in triumph. For his victory, he was given the title of Duke of Tétuan. He would lose and then regain the prime minister's post one more time, holding it until 1866. He died November 5, 1867. The title "Duke of Tétuan" is held today by a descendant, Don Hugo O'Donnell.

CÉADAOIN -- On February 5, 1733, Arthur Dillon, son of the 7th Viscount Dillon, and first commander of Dillon's regiment of the Irish Brigade of France, died at St. Germain-en-Laye, France. His father, Theobald, was killed in 1691 at the Battle of Aughrim, and his mother was killed during the siege of Limerick. Arthur was already in France at the time. He departed for France along with Lord Mountcashel's brigade, in command of a regiment his father had raised. That regiment would go on to serve France for 100 years and be the only regiment of the Irish Brigade of France to be commanded by the members of the same family for the entire history of the brigade. The Irish regiments had been sent in exchange for several veteran French regiments sent to Ireland to serve King James in his fight to regain the English crown.

(IRB) in Dublin. O'Mahony led the entire Fenian organization until 1865, when internal disputes led to its splitting into three factions, one being O'Mahony's. His faction's failed in its attempt to invade Canada through Campobello Island in April 1866. Eleven months later, a rising in Ireland failed. In the wake of these debacles, O'Mahony's Fenian wing ceased to exist and he lived out his last days in poverty until his death in 1877. Like Terence MacManus, O'Mahony's body was returned to Dublin where he was given a huge funeral and was buried at Glasnevin Cemetery. 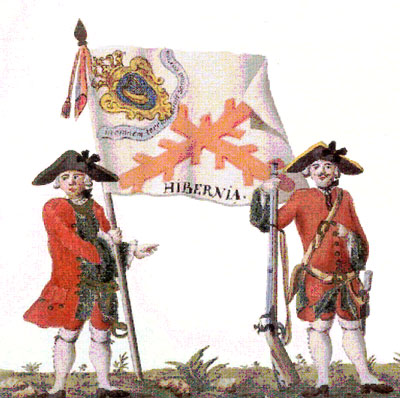 SATHAIRN -- On February 8, 1743, during the War of Austrian Succession

Gages took up a defensive position with the Panaro River to his rear, a risky decision. The Irish were posted on the Spanish right, and, during a momentary breakthrough, the Irish captured two Austrian flags. But the second line of Austrians did not break, and the Spanish advance was halted as darkness set in, ending the fighting. The Spanish could claim a tactical victory, since the Austrians left the field first, but it came at horrendous cost, especially to the Irish. They lost over 24 officers and 465 men killed. Once again hundreds of Irishmen died many miles from home for "every cause but their own." , soldier, lawyer, politician and head of the Office of Strategic Services, died in Berryville, Virginia. Donovan was a key figure in the development of the United States intelligence service. His life reads like a Hollywood movie script. Born in Buffalo, New York, on January 1, 1883, Donovan earned his nickname "Wild Bill" for his bubbly personality. In truth, an examination of his life shows that he seldom acted in a way one would be likely to call "wild." After flirting with the idea of the priesthood early in his life, Donovan became a lawyer, practicing in Buffalo. He also organized a cavalry unit in the N.Y. National Guard and took that unit to Mexico when General John "Black Jack" Pershing pursued Pancho Villa.

(Left: William "Wild Bill" Donovan as he appeared while commanding teh 69th NY (165 Infantry) during WWI.) 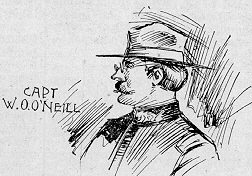