'You look like the wreck of the Hesperus' was a much-used phrase in our house in Loughrea, 20 miles from the sea at Galway Bay. Boys, well you know boys, they never comb their hair, never wash their hands, wear the same clothes forever. . . . You know the type, and obstinately oblivious of their appearance. In Ireland, we had a weekly remedy for this. . . . Mass! Shoes had to be polished, hair combed and a bath. . . . Yes, the dreaded ablutions on each and every Saturday night, so, in fairness, we hardly ever got to look like said wreck, not that it ever crossed my mind where the phrase came from or how it was common in my house.

Roll on my 60th birthday this October and as we were about to head down to Donnelly's pub in Barna for a family dinner, my wife said it, in the exact exasperated tone my mother would have used. . . . 'Brian, you're not going out in that shirt, you look like the wreck of the Hesperus!' My son and daughters looked nonplussed, the phrase meant nothing to them, though they'd probably heard it before from me, about their attire. I made a mental note to myself to look up the phrase I'd heard and used for six decades without knowing its origin . . .  and then I changed my shirt. Here we are on January 7, and I woke up around 6 a.m. . . . Yes, it's what older folks do . . . They pretend it's a healthy regime . . .  but no, it's not, it's a pain in the . . . sphincter, probably, but a pain nonetheless. What woke me up? The mental note I'd made three months ago, about the etymology of the Hesperus. No time like the present, I said, booting up the laptop. Imagine my surprise then when Mark Gorman's lovely photos of the wreck of the Sunbeam came up on my Facebook memory feed. He'd taken the shots 3 years ago on January 7, 2014, on the 110th anniversary of the sinking of the schooner Sunbeam, on its way from Kinvara to Cork, under ballast (look it up) when it was washed up on the reefs at Rossbeigh beach, Glenbeigh, County Kerry. You couldn't pick a more beautiful place to wreck your ship if you tried. 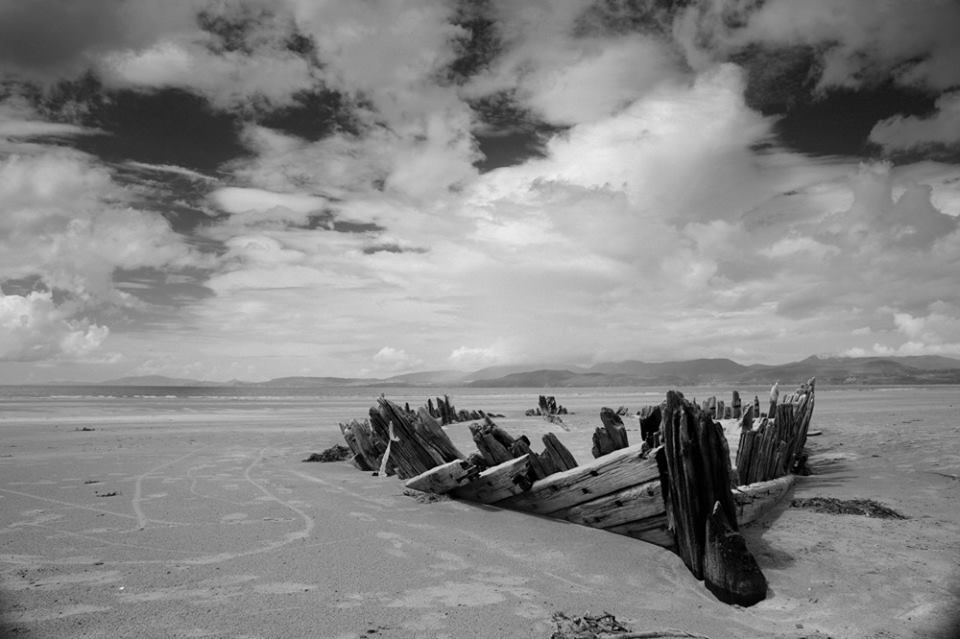 Back to the Hesperus. On a cold night in December 1830, during a huge Nor'easter storm off Gloucester, Massachusetts, the schooner Hesperus came to grief on the reef called 'Norman's Woe' and all the crew and her captain, and his beautiful red-haired daughter were drowned. He had ignored warnings of the impending storm and the pisheog about bringing a woman out in a storm, and he boasted about his ability to ride out any storm God could send his way . . . famous last words! His pitifully damaged ship sat on the rocks for days, torn and tattered sails flapping uselessly in the wind, the mast and spars all broken and smashed, the lovely lines of the ships timbers torn asunder by an angry mother nature. The phrase came into popular culture when the American poet Henry Wadsworth Longfellow, who lived a day's ride from Gloucester, wrote the ballad / poem 'The Wreck of the Hesperus' in 1840. The ship captain's pride and his doomed ship became the catch-call for mothers and fathers up and down the American coast when they admonished their children for being messy, or careless or looking disheveled, or worse, full of careless pride. No doubt our emigrant ancestors were thus described as they, poor, pathetic, half-naked, starved creatures, disembarked from Famine ships at ports up and down the New England coast in the years that followed the publication of Longfellow's poem. I am sure, like my kids, they had no idea who this 'Hesperus' guy was, nor if the phrase was derogatory or otherwise. They probably didn't even understand English. Can you imagine the Syrian refugees today, meeting an Irish navy rescue vessel on the Mediterranean, and one Cork sailor singing out to his mates, 'God luv 'em lads, they look like the wreck of the Hesperus!'

All I know is that the phrase crossed the Atlantic and by the 1960s was common or garden in my house in Loughrea, 3,000 miles from 'Norman's Woe.' I'd give a whole lot this minute to hear my mum admonish me once more for not looking the part, and, yes, I think I'd have a knowing smile on my little boy's face, finally understanding what the heck she was talking about!

"WRECK OF THE HESPERUS" by Henry Wadsworth Longfellow

It was the schooner Hesperus,
That sailed the wintry sea;
And the skipper had taken his little daughtèr,
To bear him company.
Blue were her eyes as the fairy-flax,
Her cheeks like the dawn of day,
And her bosom white as the hawthorn buds,
That ope in the month of May.
The skipper he stood beside the helm,
His pipe was in his mouth,
And he watched how the veering flaw did blow
The smoke now West, now South.
Then up and spake an old Sailòr,
Had sailed to the Spanish Main,
"I pray thee, put into yonder port,
For I fear a hurricane.
"Last night, the moon had a golden ring,
And to-night no moon we see!"
The skipper, he blew a whiff from his pipe,
And a scornful laugh laughed he.
Colder and louder blew the wind,
A gale from the Northeast,
The snow fell hissing in the brine,
And the billows frothed like yeast.
Down came the storm, and smote amain
The vessel in its strength;
She shuddered and paused, like a frighted steed,
Then leaped her cable's length.
"Come hither! come hither! my little daughtèr,
And do not tremble so;
For I can weather the roughest gale
That ever wind did blow."
He wrapped her warm in his seaman's coat
Against the stinging blast;
He cut a rope from a broken spar,
And bound her to the mast.
"O father! I hear the church-bells ring,
Oh say, what may it be?"
"'T is a fog-bell on a rock-bound coast!" —
And he steered for the open sea.
"O father! I hear the sound of guns,
Oh say, what may it be?"
"Some ship in distress, that cannot live
In such an angry sea!"
"O father! I see a gleaming light,
Oh say, what may it be?"
But the father answered never a word,
A frozen corpse was he.
Lashed to the helm, all stiff and stark,
With his face turned to the skies,
The lantern gleamed through the gleaming snow
On his fixed and glassy eyes.
Then the maiden clasped her hands and prayed
That savèd she might be;
And she thought of Christ, who stilled the wave
On the Lake of Galilee.
And fast through the midnight dark and drear,
Through the whistling sleet and snow,
Like a sheeted ghost, the vessel swept
Tow'rds the reef of Norman's Woe.
And ever the fitful gusts between
A sound came from the land;
It was the sound of the trampling surf
On the rocks and the hard sea-sand.
The breakers were right beneath her bows,
She drifted a dreary wreck,
And a whooping billow swept the crew
Like icicles from her deck.
She struck where the white and fleecy waves
Looked soft as carded wool,
But the cruel rocks, they gored her side
Like the horns of an angry bull.
Her rattling shrouds, all sheathed in ice,
With the masts went by the board;
Like a vessel of glass, she stove and sank,
Ho! ho! the breakers roared!
At daybreak, on the bleak sea-beach,
A fisherman stood aghast,
To see the form of a maiden fair,
Lashed close to a drifting mast.
The salt sea was frozen on her breast,
The salt tears in her eyes;
And he saw her hair, like the brown sea-weed,
On the billows fall and rise.
Such was the wreck of the Hesperus,
In the midnight and the snow!
Christ save us all from a death like this,
On the reef of Norman's Woe! 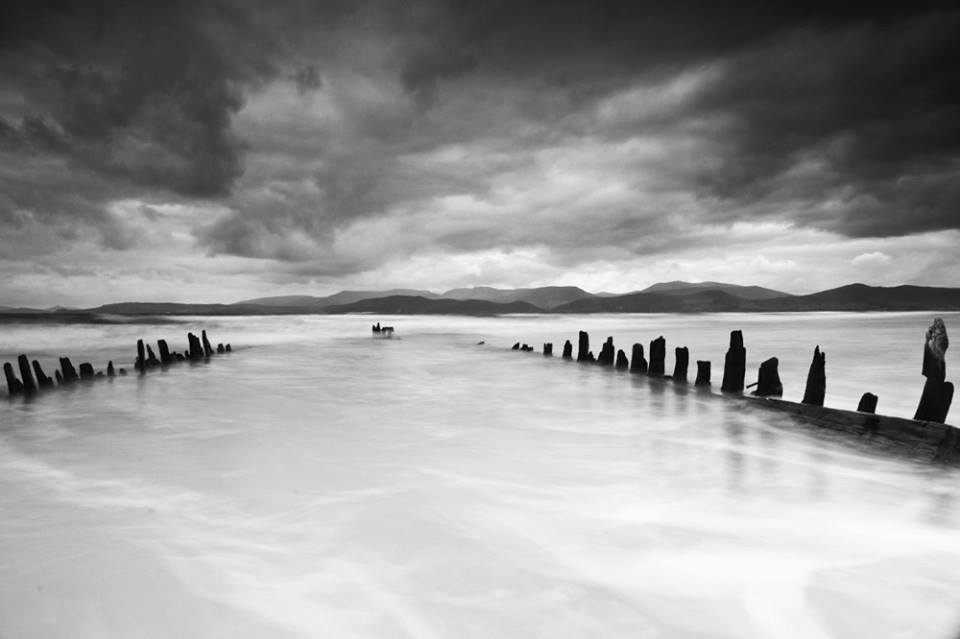 All poem rights to H. W. Longfellow. The photo rights Mark Gorman and the words, all mine, Brian Nolan. Hope you enjoyed the read. For more stories like this, come with me on one of my Walking Tours - Galway Walks GalwayWalks.com.

Nice article Brian, but I think Hesperus has ancient links to Hades, and asper(sions) as well etc...

And right you are Daniel, but I was more interested in the disheveled description. Hope you enjoyed the poem too, it was a very popular poem in the 19th century, a bit of a morality play, but poignant too.

Ah Brian, I just read what you talked about.  Nice story.  Good poem, it has been a long time since I read Longfellow.

Hi Brian - We used this phrase when I was a little girl growing up in Dublin. My parents are from Cork, so I think that's where they originally learned it. Many a time I was advised to tidy up not to look like "the wreck of the Hesperaus." Thanks for sharing your research and these wonderful photos.

John Wilson wrote to me as follows; The link below provides some photos of Norman's Woe, along with some of the backstory to the poem. The person found tied to the mast was actually middle aged, likely the captain's wife. Sailors often tied themselves to upper masts if their ship struck a rock or shoal, in hope that rescue would arrive before they became submerged or the vessel broke up. A schooner named "Hesperus" was damaged in Boston harbor during the same storm, but was repaired and continued to sail for at least 8 more years. I suspect Longfellow read both stories in the news and "Hesperus" sounded more poetic "Favorite."

Coincidentally, in 1847 "Hesperus" carried Irish immigrants from New Brunswick to Boston. I suppose they'd never heard of the poem so didn't feel superstitious about the name.

After a day's worth of playing outdoors my parents used to also tell me that I looked like the wreck of the Hesperus.

This puts Longfellow back on my radar !!!!