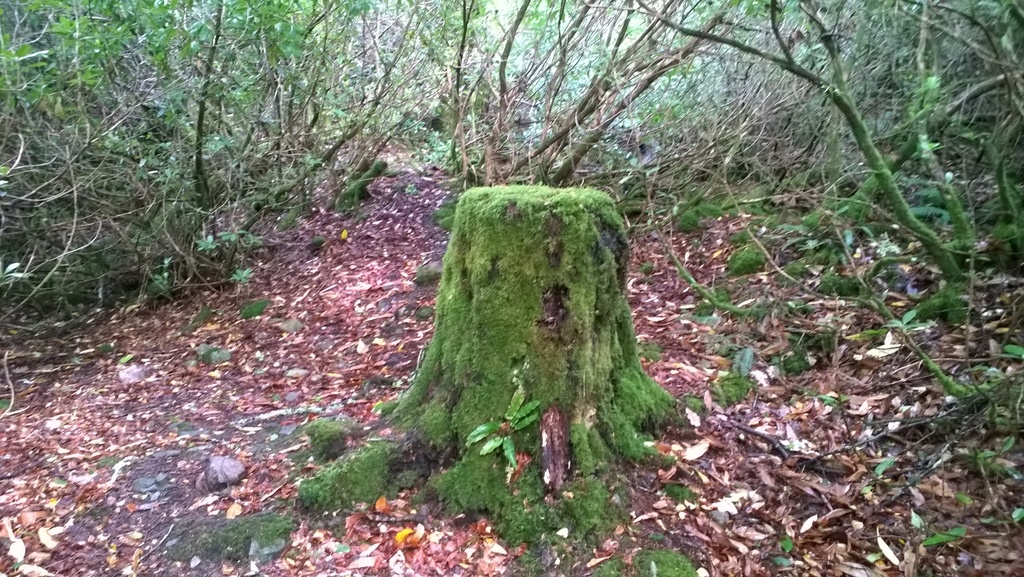 If one is travelling through Connemara, one of the more compelling tourist destinations is Kylemore Abbey, a Benedictine monastery since 1920, which sits majestically surrounded by wooded acres behind a tranquil lake. The gray structure built with indigenous granite is castle-like and imposing, and tourists can inspect its well-appointed interior to learn of its origin, which commenced in 1867 as a private residence then switched hands with a fascinating, scandalous story. This was all well and good for my friend and me, as we pulled into the abbey’s car-park unplanned on our way from Galway to Clifden. We were there last October, a tourist’s off-season, and we were therefore unencumbered by a crowd. To our surprise, it only took a half hour to walk through the section made available to the public; at the time we had no way of knowing the real attraction was just outside.

In the woods of Kylemore Abbey, there are symbols and signs enough to set anyone’s imagination aflame. A sylvan path stretches hushed and eerie through a sense of timelessness that is somehow historic in ambience; the environs quiver with dappled light through the trees. In unexpected places, there are gifts along the natured path: a gray stone seating structure abutting an ancient tree I was convinced had been crafted as a couch for a giant; a tree stump covered in moss, so verdant and soft to the touch, it was surely the throne for the queen of the faery’s, no doubt used since the beginning of time and passed down through countless reigns. And there at the path’s side, a triangular boulder more than twenty feet high, so perfect in three-sided proportion, it was easy to subscribe to local legend, which calls it the wishing stone. And I, being a willing believer in Irish folklore, did as the brochure in my hand instructed: I gathered three pebbles from the ground and stood with my back against the stone. When I had decided upon three wishes, I closed my eyes and tossed each pebble over my head, willing each to clear the stone’s apex, so that my wish would be granted. It came to me as no surprise later that night when my first wish came startlingly true.

...and seven for secret that's never been told."  What was that first wish and what ever became of the other two?

Ah, glad you asked! My wishes at the time ( October of 2014) pertained to the pending publication of my second novel, "Dancing to an Irish Reel," which is set in the west of Ireland. It was released last March by Vinspire Publishing! I can definitely report I wrote the love song to Ireland I set out to do, so my wishes involved the best case scenario for the life of the book.  Here's Dancing to an Irish Reel's Amazon page :   http://amzn.to/1gwEpeN