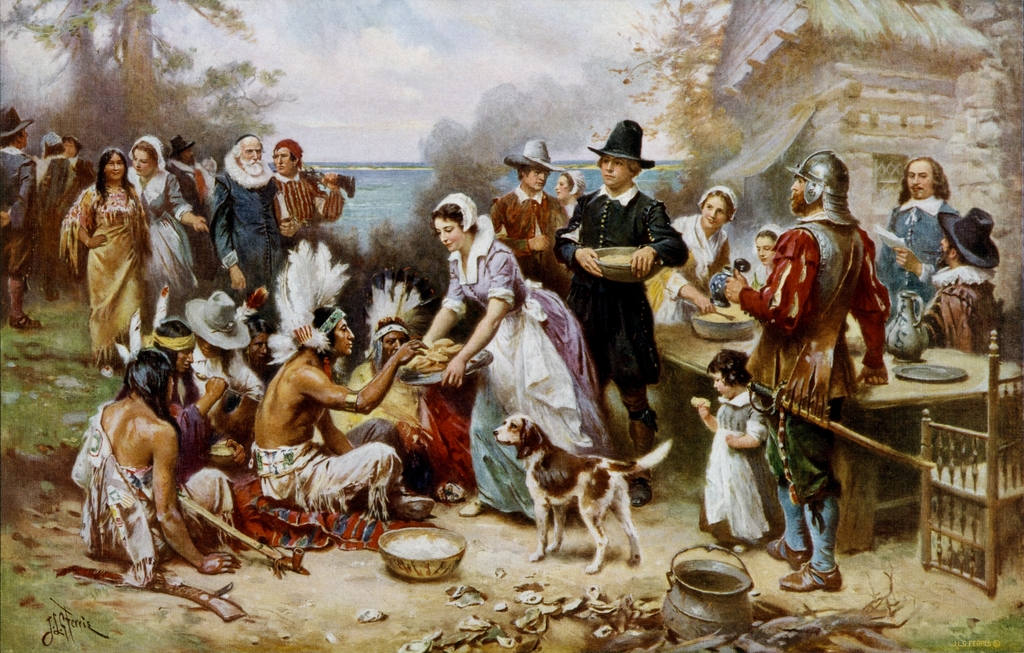 History, as written, is not always accurate. Revised versions of past events are often presented to support conclusions already reached - political or otherwise. Sadly, many of these revised versions are presented as fact in our school books like the discovery and conquest of America which is slanted to show Europeans as the natural inheritors of the earth to justify colonization. From the war with Mexico and the massacre at Wounded Knee to the very beginning of our nation, facts have been altered. A prime example of that is the holiday known as Thanksgiving, and it really didn’t have to be altered at all.

An early Thanksgiving was actually celebrated on February 21, 1621 when a band of starving pilgrims at Plymouth Rock were saved at the last minute by the arrival of a ship from Dublin, Ireland bearing food from there. The Boston Post, the largest circulation newspaper in the 1920s and 1930s, discovered the earlier date for the Thanksgiving ritual and showed that the traditional date of the autumn of 1621 was actually incorrect.

However, according to traditional story, heroic Christian Pilgrims arrived in America and, after a successful harvest, shared what little they had with their poor Native American neighbors in thanksgiving. The truth is that the Natives weren’t poor, and if they hadn’t shared their bounty with the pilgrims, the pilgrims might not have survived. After all, yams, corn, and the rest were all American dietary staples and the turkey was an American bird. It was Chief Massasoit and the Wampanoag tribe of Native Americans who taught these newcomers how to plant, grow, and harvest the strange foods they’d never seen before. As for the feast, it was nothing new; it was in thanks for a bountiful harvest and harvest festivals had been a tradition in many lands, including Ireland, for centuries before the pilgrims ever buttered their first corn on the cob. But, who were these pilgrims and why do they get the credit for the “first” thanksgiving?

"The American Heritage Dictionary" defines pilgrim as one who makes a journey for a religious purpose. The religious purpose of these pilgrims’ was to escape persecution. They were a renegade group of English Protestants advocating a strict discipline according to their own interpretation of the bible. Their aim was to reconstruct and purify the church’s rules governing individual conduct. They were tolerated by other Protestants because they hated Catholics, but when they demanded reforms to purify the Church of England, they were hunted out of the country! We use the term Pilgrim (with a capital "P") to identify the group who arrived at Plymouth in 1620 on the Mayflower. A larger group, led by John Winthrop, arrived ten years later and started the Massachusetts Bay Colony – we call them Puritans. There were also some who remained in England. They all held the same convictions to purify the church, but they differed among themselves about who was in charge. Those who stayed in England became Presbyterian; those who came to Plymouth considered the congregation the ultimate authority; while those who came to Massachusetts considered a hierarchy elected by the congregation, as the ultimate authority. Despite these minor differences they all had one thing in common: they hated Catholics and were one of the most unreasonable and bigoted groups in history. In 1649 - less than 30 years later - those Puritans who remained in England successfully fomented a civil-war, beheaded King Charles, and then turned their army of zealots toward Catholic Ireland under Oliver Cromwell. British Major-Gen Frank Kitson wrote that this army’s, two main reasons for existing were defense of their religion and suppression of Irish Catholics.

In Ireland, the Puritan Army began its campaign at Drogheda where they cut down its 3,000 defenders. What followed was to become the trademark of Cromwell’s victories across Ireland. These God-fearing Christians indiscriminately slaughtered defenseless men, women, and children, then Cromwell declared a national day of thanksgiving in celebration of the deed – far from a harvest festival, that thanksgiving celebrated an evil deed.

Meanwhile, in America in 1675, the sons of the Pilgrims who dined with the Wampanoag tribe that harvest day in 1621, began an 11-year war to expand their land holdings and defeated the sons of their father’s hosts. Tolerance was not in their vocabulary even among the Massachusetts Puritans. One lady, Ann Glover, who had fled Cromwell’s imposed slavery in Barbadoes, found service as a maid in the Puritan colony in Massachusetts. One night, she was overheard saying her evening prayers in her native Gaelic. She was accused by Cotton Mather of conversing with the devil. When it was learned that she was an Irish Catholic, she was told to denounce her religion. She refused and was hanged as a witch. That was 1688 - 39 years after the thanksgiving at Drogheda, and 68 years after the Pilgrims' thanksgiving in America. On Nov 16 1988, the Boston City Council erected a memorial to Ann Glover in recognition of the injustice done to her 300 years earlier, and proclaimed that day “Goody Glover Day”. The idea of giving thanks to God remains a fundamental duty, be it for a bountiful harvest or blessing bestowed, but the cruel, witch-burning Puritans of the 1600s are hardly the example to hold up to our children as role models for this holiday. Instead, let’s look to America’s first official national day of thanksgiving.

It was proclaimed by the Continental Congress on December 18, 1777, as a day of solemn thanksgiving and praise for the signal success of our forces at the Battle of Saratoga – a turning point in the struggle for independence. And the turning point in that battle was the killing of General Simon Frazier by Sgt Timothy Murphy, son of Donegal immigrants. He was part of the 12th Regiment of the Pennsylvania Line under General Charles Thompson of Co. Meath. An expert marksman, he was part of Morgan's Rifle Corps. In August 1777, Murphy was one of 500 hand-picked riflemen sent north to reinforce the Continental forces opposing General Sir John Burgoyne's invasion of Northern New York. It was at the Battle of Saratoga on October 7 that Murphy, from his perch in a nearby tree, fired the shots that killed Sir Francis Clerke and General Simon Fraser, throwing the British command of the battle into disarray and allowing an American victory. A plaque to Timothy Murphy now stands on that battlefield to commemorate the deed that is not in our history books. The Saratoga AOH annually lays a wreath there.

The idea of a national day of Thanksgiving caught on and by 1846 annual days of thanksgiving were being celebrated in at least 14 states when author Sarah Hale began a campaign to make the last Thursday in November a permanent national day of thanksgiving. In the 1860s, she wrote to every state and territorial governor urging the idea as one of national unity in a country torn by civil war. On October 3, 1863, President Lincoln finally declared the last Thursday in November as Thanksgiving Day bringing together all the past elements of the harvest festival, national patriotism, and religious observance.

This is the real story behind the Thanksgiving day we celebrate and the message it should convey is one of thanks for all our blessings, both civil and religious. And isn’t it nice to know that the Irish had a hand in it? And if anyone doubts it show them the memorials to Timothy Murphy and Goody Glover! So. this year, instead of just food and football, let’s remember give thanks to God for the blessings bestowed on our families and on this great nation ... and forget the guys in the funny hats with buckles on their shoes!

Thank you for the Irish connections. As to the Americans, there were three main reasons that the Native population was unable to resist the English incursions. First, the Pilgrims were originally headed to the Virginia colony but chance landed them in Plymouth where they were given license by the English king who presumed that he had the right to ownership of American lands because the people living there were not Christians. Second, traders and explorers had brought European diseases to the Americas for which the natives had no natural immunity. Their population was totally decimated (I don't remember the exact percentage of lives lost to disease but it could be as much as 90%).  This gave them a much smaller population of people to mount any resistance.  Finally, Native tribal animosities were such that the English were perceived as less of a threat than the Native neighbors.  This led to Natives forming alliances with the English for mutual protection from other Natives.  If Native tribes had been more willing to form alliances among themselves, they could have certainly evicted the English from Massachusetts but once the English had formed the Massachusetts Bay Colony and began regular resupply ships from England, continuously imported more colonists, and imposed English laws and property rules on the Natives, the opportunity for resistance had passed.

a good story, but while you are on it look up the sons of the mayflower originals who actually returned to england and fought with cromwell in ireland.

YUK, Cromwell, drove my people out of Kilkenny. And now, we are over here where most others would like to be.  Thanks, Ollie!

Very well researched and written. I knew the Indians had helped the Pilgrims and the Pilgrims would have perished without their help. However, I didn't know all the other history behind it with the tie in to Oliver Cromwell in Ireland. Nor was I aware of the name changes to the religions. Or even the accusations of witchcraft and the trials. Thank you for the enlightenment.