Hell, not just "Psycho." It’s better than "The Innocents," "The Evil Dead," "Paranormal Activity" and "The House of the Devil." It’s even better than "The Exorcist," "Let the Right One In" and "The Others." Oh, my God, "The Others." The part at the end where Nicole Kidman and the children look out the window. Jeepers creepers! I could go on, but thinking about these things is making my finger hit the wrong kets, sorry, keus, sorry, keys. And what about "The Omen"? Years since I saw it. It’s starting to come back to me now. Billie Whitelaw throwing whatshername out of the hospital window, Gregory Peck and David Warner digging down into that grave in the dead of night and the big black devil dogs coming at them to try and tear them apart, and then the three sixes on Damien’s scalp. Stop! That’s enough of that. Where was I? Yes, right, I was going to tell you about the daddy of them all, the biggest shocker in the history of movies. And to think I would probably never have seen it if I hadn’t been in danger of getting soaked to the skin.

I suppose I’d better begin at the beginning. It was about twenty past seven on 28th October 1962 when I got off the train at the old LMS railway station. I crossed the road to the bus stop and waited. A quarter of an hour later I was still waiting. So I started to pass the time by looking at the forthcoming attractions in the Midland Cinema behind me. "Cat on a Hot Tin Roof,"  "Saddle the Wind." And currently showing: "Les Diaboliques (WITH SUBTITLES)." That’s what it said. WITH SUBTITLES. This was a French film, and they were showing it in Derry. In French.

I have to tell you about the Midland. The Midland Cinema was the oddest picture house I’d ever been in. It featured movies that were donkeys’ years old and newly released ones that no other picture-house in town would look at. I remembered going there to see "Alias John Preston," starring Christopher Lee, easily the worst experience I ever had in a cinema – apart, that is, from the time I was bitten on the tongue in the Midland by Mary Pat McGroin. That happened in the summer of 1961 during "The Passion of Joan of Arc," made in 1948. Someone once told me that the Midland showed the first talkie, released in 1936. It was "The Singing Fool," starring Al Jolson. They didn’t show it until 1959, though. I peered up the street. No sign of a bus. Then the rain started to fall. Did I say rain? Bloody monsoon. No bus shelter. No overcoat. No umbrella. There was only one thing to do. I darted into the Midland.

“When does the picture start?” I asked the girl fixing her eyebrows in the box office.

“Just started there five minutes ago,” she drawled into the mirror.

Sounded cozy. Atmospheric. I’d be out of the rain, though. Pity I wasn’t much good at French and that my long distance glasses were sitting on the mantelpiece at home.

“Les Diaboliques,” handing her the money.

I headed inside and, since the usherette was busy at her eyebrows, I had to make my own way in the dark and managed to step on the toes of one of the three people present.

“There’s five fecking hundred empty seats and you step on my bastarding toes. Feck off.”

That was bad enough but what followed was the most terrifying – and memorable – hour and a half of my cinema life. Everything seemed cloaked in a fitful darkness – the auditorium, the screen, but most of all the flesh-crawling horror. A French boys’ boarding school is run by a monster of a headmaster called Michel who treats everyone around him abominably – the students, his wife and his teachers, particularly the one called Nicole who until recently had been having a blatant affair with him. Nicole has unexplained scores to settle with Michel, and, just as I found myself a seat, she was hatching a scheme to murder him. His wife, Christina, who was being regularly raped and beaten by him, is not made of the same stern stuff as Nicole and very reluctantly goes along with it. It's an elaborate plan in which they will visit Nicole's home in a faraway village, lure Michel there and drug him, then drown him in a bathtub and secretly return to the school to dump his body in the swimming pool. The scene where they keep pushing Michel’s head under the bathwater until he is dead is something I never want to see again. 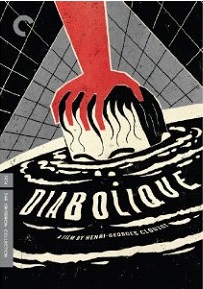 At this stage, I was silently cheering on the murderers and was gobsmacked when the two women drained the pool the next day only to find the corpse gone. And then 24 hours later, the suit that Michel was wearing when he was dumped in the swimming pool was returned to the school from the cleaners. Good God, I thought, things can hardly get worse than this. But they did. A photographer arrived to take a group photo of the staff and students and, after the large batch of printed photos was sent to the school, Christina, Nicole and I nearly wet ourselves when we saw the face of guess who staring gloatingly from a window behind the assembled group.

I am not going to tell you the ending. In return for that favour, I ask you not to order the wrong movie by mistake. Les Diaboliques was remade as Diabolique in 1996 and starred Sharon Stone, Isabelle Adjani and Kathy Bates. And it’s diabolical. Give it a miss, right? Make sure you watch the one that was made in 1955 and shown in the Midland in 1962.