At the westernmost end of Ireland’s Dingle peninsula, separated from the village of Dún Chaoin (Dunquin) by a treacherous stretch of water called The Blasket Sound, is a cluster of six stunningly beautiful islands known as the Blaskets. The largest of the islands, An Blascaod Mór (The Great Blasket), was evacuated in 1953 when the average age of its dwindling elderly community was such that life there, especially during the winter months, had become unsustainable.

Born in 1947, Gearóid Cheaist Ó Catháin, was the last child to be reared on the Great Blasket, where he lived till the age of six as the only child among adults. His memoir "The Loneliest Boy In The World" (Collins Press, 2014) takes its title from a piece by a journalist called Liam Robinson who visited the island in 1948 and syndicated his article to Irish and international papers. Illustrated by photographer Donal MacMonagle, Robinson’s piece provoked a huge response from readers worldwide who were touched by its depiction of a child who ‘only had seagulls for playmates’. In his memoir ‘the loneliest boy’ recalls that for several years after the piece was syndicated letters, toys and even an offer from prospective adoptive parents arrived on the Great Blasket “Overnight, my family and I became famous. An avalanche of post flooded in from all over the globe. Seán Filli, our postman, had a path worn to our door.’’ The letters were read and responded to and the gifts accepted, but the child’s family and community doted on him and were happy in their island home, and he himself felt no sense of disadvantage in his isolated upbringing. 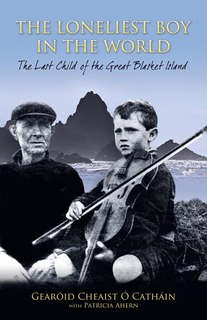 Ó Catháin was six when his family left the island and relocated in Dún Chaoin. He spent most of the rest of his youth there, within sight of The Great Blasket, and his shrewd, often funny, descriptions of the challenges and contrasts he experienced after the island’s evacuation are a significant part of the charm and interest of his memoir. Written with Patricia Ahern, it’s a well-told, well-paced story which offers both mature reflections on a long life and a unique, child’s-eye view of community already familiar to the wide readership of the extant Blasket Island canon.

And that in itself may be one of this memoir’s most valuable aspects "The Loneliest Boy In The World" is the most recent in a canon of books produced by Blasket islanders, the best known of which is "An tOileánach (The Islandman)" by Tomás Ó Croimhthain, completed in 1923 and published in 1929. Other books in the canon include "Fiche Bliain ag Fás (Twenty Years A-Growing)" by Muiris Ó Súileabháin, and Peig, A Scéal Féin ("Peig, Her Own Story", known to generations of Irish schoolchildren simply as "Peig") by Peig Sayers, both published in the 1930s. The early works have become classics and subsequent books have continued to be published since the worldwide success of "An tOileánach" almost seventy years ago. The most recent title to precede Ó Catháin’s was "From the Great Blasket to America" by Michael J. Carney with Gerald W. Hayes, published only last year.

The first books, produced on the island, were a conscious attempt by a community whose native storytelling tradition was exclusively oral to record their dying way of life for posterity. Inevitably, the personalities of the individuals who produced them were to some degree distorted by the editorial and translation processes which their material underwent. A great part of the fascination of Ó Catháin’s recollections, therefore, lies in his personal experience of people such as Peig Sayers, whom he knew as a neighbour and remembers as an energetic and cheerful woman as opposed to the lugubrious caricature that she later became in the popular Irish imagination.

While the rich culture of the West Kerry Gaeltacht continues to flourish on the mainland, the deserted islands have become an icon for the sense of Irishness that’s rooted in the cultural heritage of Irish language storytelling which the British classicist George Thompson, who found it on the Blaskets, compared to the works of Homer. Today Ionad an Bhlascaoid Mhóir (The Great Blasket Centre) stands in Dún Chaoin, at the tip of the peninsula, facing the islands. It’s a vibrant heritage centre with a permanent museum exhibition, a study centre and a library which, among other related material, contains first editions and translations of the islanders’ books. Gearóid Cheaist Ó Catháin’s memoir will make a welcome addition to the Blasket island canon as well as a fascinating, touching book for a wider popular readership.

Felicity Hayes-McCoy’s memoir "The House on an Irish Hillside" (Hodder & Stoughton UK) is available both as a paperback and an eBook.

The Audiobook of The House on an Irish Hillside, read by the author and enhanced by traditional Irish music, is available either as a 6-CD set or an MP3 download.

what a wonderful review. Thank you for bringing this book to our attention. I do have a copy of Peig's story. I heard about her from my friends who live in Ireland and I was curious to read her book, so I purchased it at a local bookstore in Waterford Ireland on my last trip there. I am now curious to read this book. Thank you again.