Then, one of the half-track’s occupants, a tall, sturdy man with blue eyes and brown hair, broke cover from behind the vehicle and went to outflank the gunman. According to one witness, the soldier picked up a heavy stick and crept up behind the sniper, who was still shooting, and promptly bashed his head in.

It wasn’t the first time that Paddy Cooper saw action fighting for Israel. That same year under the hot noon-day sun in the small town of Bayt Jibrin, to the west of the Hebron Hills, a detachment of the Israeli Defence Forces were pinned down by armoured vehicles of the Jordanian Legion.

Paddy inched his way forward with a Piat anti-tank weapon (below-right) to sort out the problem. The Piat could only be fired within 50 metres, but the soldier crept even closer to make sure of his target. Alone, he cocked the weapon, fired and hit the vehicle. On another occasion, Paddy, who was a specialist with the Vickers machine gun in World War II, took part in an attack on a police station.

A hole was blown in the wall, through which Paddy and two others entered. According to one witness, Paddy found a Vickers there, loaded it and started to fire every which way. "He was our hero that day."

Such words seem to repeat whenever people talked of the Irishman – for that’s what Paddy, whose mother was Irish, considered himself to be.

Through dogged research, his sister Veronica later managed to unearth some tales of his fascinating life fighting on the Arab front line.

‘He had no fear,’ one former comrade told her.  He was "an impressive man, tall and handsome," recalled another - Yohanan Piltz, former deputy commander of the 89th battalion.

John Patrick Cooper certainly stood out from the crowd. Born to Irishwoman Agnes Collins and raised a Catholic in England, he enlisted in the British Army in 1942. 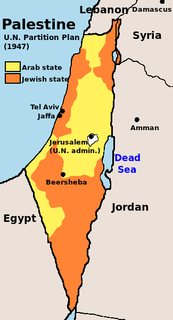 Paddy, as he was known, served in North Africa and later in Europe. Discharged from service in December 1946, he re-enlisted in October 1947, returning to the British army as a driver.

Britain had been in control of the area known as Mandate Palestine since 1917. Over the years, tensions had mounted between Palestinian Arabs and Jews who wanted to create their own homeland there.

When the Nazis took power, there was a huge influx of Jewish refugees from Germany to Palestine, increasing the percentage of Jews from almost 17% to nearly 30% between 1931 and 1935, a change in the social dynamic that further fueled tensions.

Britain found itself, on the one hand, trying to contain Palestinian Arabs who wanted their own national government free of British control, and on the other with a growing Jewish population determined to create a homeland for themselves.

After World War II, hundreds of thousands of displaced Jews flocked to Palestine, increasing the clamour for a Jewish state.

Not knowing how to placate both sides, the British handed the problem over to the United Nations, which, in 1947, divided the territory into two states -- one for Jews and the other for Palestinian Arabs.

The British were still in situ and, keen to build their relationships with these new Middle East nations, quietly aided the surrounding Arab states to the detriment of the Jews.

It was into this powder keg that Sergeant Paddy Cooper was deployed.

There were a series of clashes between groups from both sides, but tensions really overflowed April 9, 1948, when Jewish forces attacked the Palestinian village of Deir Yassin, close to Jerusalem, in a bid to rid the area of Arabs.

Paddy was part of a detachment of British troops who watched the attack unfold and which prevented Jewish reinforcements coming to the aid of the convoy.

Under orders not to interfere, Paddy and his comrades watched until the convoy was overrun and its vehicles set alight with the passengers still inside, leaving 78 Jews dead.

He later told his Israeli commander Yohanan Piltz, he could not "serve in an army that allows atrocities like that."

Paddy had always advocated an independent Ireland, so he already had an affinity for what Jewish people were trying to achieve. As far as he was concerned, the Jewish / Palestine issue was very simple. It made no sense to him that he fought Nazi Germany in World War II only to be then deployed to the Middle East to fight the Nazis' victims.

That convoy massacre was the final straw – that evening, Paddy decided to desert his unit and fight for the Jewish state.

A month later, on May 14, the state of Israel was declared, and the very next day it was attacked by a coalition of Arab forces (Lebanon, Syria, Iraq, Jordan, Egypt, Palestinians and volunteers from other nations).

Paddy’s military career with the Israeli army was action-packed on and off the battlefield. He could fight hard, but he partied harder. According to one story, he went to a hotel restaurant in Tel Aviv to unwind with some mates after a battle.

All was good fun until the bill arrived and they realised they didn’t have enough money to pay. Paddy solved the problem by taking out a smoke grenade and throwing it into the lobby. In all the confusion, he and his pals made their escape.

Paddy, who had been declared a deserter by the British army in June 1948, was discharged from the IDF in April 1949. He decided to remain in Israel despite an amnesty being granted to him by the British in 1958.

He wasn’t the only British army deserter to join the ranks of the IDF. One of the most famous was Foxford, County Mayo man Sergeant Mike Flanagan, who together with fellow Sergeant Harry MacDonald, stole two Cromwell tanks, bursting them through the gate of the British base in Haifa before delivering them into the hands of the Israeli army.

Like Paddy Cooper, Mike Flanagan saw the Jews battling the same British army that the Irish had fought 25 years earlier. The plot to steal the tanks was hatched when Flanagan and MacDonald were contacted by an agent of the Jewish paramilitary group Haganah.

Using their rank, Mike and Harry volunteered to take midnight guard duty at the camp. The initial plan called for taking four Cromwell tanks that were in the soldiers’ care, but the two Jewish Haganah agents who were tasked with driving the other vehicles ran into difficulties.

The two stolen tanks became the ‘core’ of the IDF's first tank battalion, which also included one Sherman and some Italian tanks, and both Mike and Harry fought through the war of independence as members of the Israeli Defence Forces.

In one action, Operation Yoav, their tank spearheaded an attack by the Palmach Hanegev Brigade against the Egyptian army’s Iraq-el-Manshiya fortress.

Racing ahead, Flanagan lost touch with what was going on with the attack’s progress as artillery fire tore up the ground around his tank. So heavy was the shelling that MacDonald couldn’t even open up the hatch to see what the situation was.

A shell landed in front of the Cromwell and a piece of shrapnel passed through the driver’s viewing slot, wounding Flanagan in the head and chest, but Mike managed to keep driving, ramming through barbed wire and into the heavily defended fortress.

Rifle fire pinged off the tank as MacDonald carefully raised the hatch only to realise that they had made the advance alone without any ground support. Mike Flanagan quickly turned his Cromwell around and got out of Dodge as quick as his tracks could carry them.

Both men would continue to serve throughout the war. When the dust of battle settled, MacDonald moved to Canada, but Flanagan stayed on, converted to Judaism, married and raised a family.

Mike Flanagan’s tank now sits in the Armoured Corps Museum in Latrun . . . a little piece of history to mark the Jewish nation’s road to independence.

As Israel’s citizens reflect on their state’s foundation 70 years ago, they will look at a past of blood and sacrifice – but it’s a past made all the richer thanks to two Irish deserters from the British army . . . brave men who saw Israel’s struggle for independence and found a common cause in which they would risk all for their place in the Promised Land.