We might have been called “narrow-backs” or “Micks” or “Donkeys” but the Irish of Laurel Hill were joined together as a community. My dad was in the Holy Name Society. He read the Epistles at Mass in St. Theresa’s. We would travel to Gaelic Park to watch Uncle “Mick” or Uncle Martin beat Kilkenny or lose to Kerry; all while we yelled “UP TIPP!” at the top of our lungs. We’d run under the bleachers pinching sips from unwatched beer bottles and collecting fallen change to buy sodas from the bar. There was always a great game under the sun, with both the American and Irish national anthems and flags receiving full respect and at solemn standing attention.

In the neighborhood, we played in backyards, out front on the sidewalks, around the corner; and in our case “under the bridge”. The pedestrian bridge was on 45th Street and ran north to south across the Connecting Highway which would become the Queens Midtown Expressway and eventually, Long Island Expressway. The Brooklyn Queens Expressway was not built yet. We would not ever cross the bridge unless we were with our parents. I still remember the “blimps”, with their droning motors flying low overhead on their way to the World’s Fair in Flushing.

We would play with Colleen and Michael Duffy, “T.D.” Flynn, Francis Conway, and Tommy and Eileen whose grandparents owned the candy store on Laurel Hill Boulevard between 45th and 46th Streets. For a nickel we could fill little brown bags with string candy, dots, red pennies, candy cigarettes and gum. We played army with ash hurling sticks as guns (never having heard of baseball or football). We stood at attention and sang the “Marine Hymn” as Irish-Americans returned with honor from Vietnam. We played in garages and dog houses. Put on shows. Made Indian paint with bricks and water. Chased butterflies and cats. I remember Uncle Martin donning his Army Reserves uniform to direct traffic on Queens Boulevard and Greenpoint Avenue during the Great Blackout of ’65. How proud we were of him as new Americans to see him in full uniform.

My father was the first of his generation to come to America, become a citizen, and buy a home. He and my mom planned to fix up the home, sell it and keep upgrading. The American Dream. That’s why it was  such a shock for them in 1966 when Mayor John V. Lyndsay notified them (by mail) that their home was going to be demolished. 325 other families, mostly Irish, got the same letter. This was devastating news to the neighborhood of Laurel Hill which was going to be not only torn in half by highways, but also plowed over for clover leafed interchanges of the BQE/LIE. Many were able to receive fair market value from the City and buy affordable housing elsewhere.

Joe Cassidy, of the New York Daily News came to Laurel Hill to write a story about the disaster under the headline “Highwaymen of ‘Progress’ Killing Laurel Hill”. Joe sat in the backyard with my dad long into the night. A few beers were put down. The story, was published on Monday, November 21, 1966. It appeared on half a page. Page 5. This is a quote from the last paragraph: “ But neither they, nor any of those still remaining, have been told what they’ll be paid for their homes which will go for a road that at best will only transfer the twice-daily traffic snarls from one place to another. In their dealings with these of its citizens, the City has acted shamefully. Meanwhile, in the name of progress, the bulldozer is replacing the baby carriage throughout Laurel Hill. And soon, only traffic noises will be heard in the backyard where Rodger Gleeson used to sit on summer evenings and play Irish melodies on his little accordian.”

For reasons of which I am still unsure we were among the last families to leave in late 1967 to early 1968. My father so loved the soil he had devotedly fertilized and tended for years that even after we moved to another home in Woodside on 62nd Street, we came back to the old house and filled metal garbage cans with that dirt for the new house. Eventually, trees grew and flowers bloomed from that soil in Woodside.

The construction equipment came into Laurel Hill, Queens from 1966 to 1968 and removed a community. They left in its place, an elevated system of highway overpasses and underpasses. Few thoughts return to the displaced whose homes are now buried under the center lane of vast highway pavement. The Irish of Laurel Hill are survivors. They loved life out loud and in color. They celebrated their successful Atlantic crossings and their common culture. They taught their children to appreciate and respect ethnicity. All ethnicities. My dad is gone now and although his neighborhood of Laurel Hill is no more -- the people who came from there, enhanced the character and added value to every part of this City. They still do. We will always be the proud Irish of Laurel Hill, Queens. 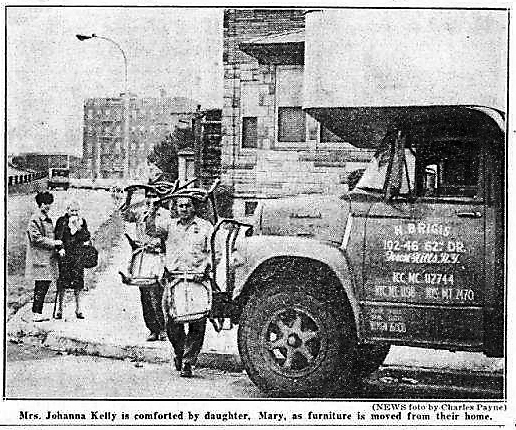 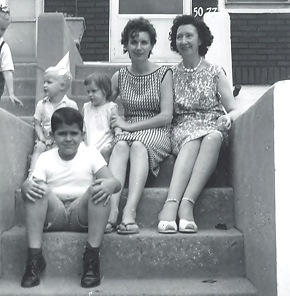 My mother, Gloria Anne, and her mother, Bridget “Bridie” McGuinness, in front of 50-77 45th Street, Laurel Hill. Now under the LIE/BQE.

Read PART ONE of this series.

Absolutely fantastic stuff, Kevin.  Many thanks to you for sharing this very personal history!

Thank you for reading these Ryan and for your kind words.

We are not a glum lot!! LOL!! Enjoy your day

Eloquently put, written from the heart.

Comment by Jim Curley on October 2, 2013 at 8:59am
Sad what the Moses-ization process (destroy neighborhoods to expedite auto traffic) did to New York City. Look what the Cross-Bronx Expressway did to that borough. Thank God the people of lower Manhattan were able to stop the "expressway" slated for their neighborhood.

Kevin, you did a great service in commemorating Laurel Hill for posterity. Very well done.

I am humbled and made happy by your kind comments. Slainte.

Kevin, thanks very much for your life story of growing up in Queens, NY. It touches the chords within me about my own years growing up in that great city of immigrants. The Irish have given so much to that city and it gave much to us as well. We should never forget our heritage and we should not let the next generation forget it either. By telling your story, you are doing a great service to all.

Very grateful to you Jim for your thoughts.

Jim Goulding expressed my precise thoughts and feelings. Thank YOU, Kevin for capturing your story, and reminding us about the tragedy of bureaucratic decisions - which still occur, throughout other countries as well.

A great read, thanks again Kevin.  So shameful the city used imminent domain to displace an entire neighborhood.

Kevin I really enjoyed reading "The Irish of Laurel Hill". It gave me a great insight as to how my relatives lived in New York during the late 50s & early 60s and what a tight knit community existed there. Sadly that world seems to be disappearing fast both here in Ireland and with you in New York. My relatives left Ireland and went to live in Queens in 1911 but sadly we have lost touch with them. But reading your piece touched something deep within me and in a strange way linked me to them. Thanks Fr.Martin