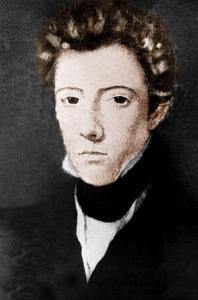 Dr. James Miranda Stuart Barry was born Margaret Ann Bulkley. Her parents were thought to be Jeremiah and Mary-Ann Bulkley. However, there is some speculation about the biological father. Barry's place of birth is usually given as Cork, and Barry's birthday is usually given as between 1789-1799, as her university and army records do not correspond with any other records of that era. Her mother was Mrs. Mary Bulkley nee Barry, who had three children -- two daughters and one son. She came from a family of well-known shipbuilders in Cork city.

In the early 1800s, Mrs. Mary-Ann Bulkley arrived at her brother’s house in London, hoping that he would accommodate her and her two daughters. Some sources would suggest that her husband and son had cast her out of the family home, while other sources would suggest that, due to the financial mismanagement of the family funds [by unknown persons], Mary-Ann and her two daughters lacked financial support from both Jeremiah [by now in prison] and their son, who was then married.

Mary-Ann's brother, James Barry, was a celebrated Irish artist and professor of painting at London’s Royal Academy. He did not offer any support and, in fact, turned her away. He did, however, make provision for her in his will, and when he died shortly after her arrival in London, Mary-Ann benefited greatly from the inheritance he bestowed on her.

Mary-Ann not only took advantage of all the financial benefits of her inheritance from her brother, she also took advantage of his influential liberal-minded friends, such as Francisco de Miranda, the famous Venezuelan revolutionary, who was the influential factor in Margaret taking a man’s name. De Miranda’s influence alone was sufficient to allow a “James Barry” to gain access into the University of Edinburgh Medical School in 1809, as women were not admitted into medical school in this era.

Barry, her mother and a gentleman friend travelled to Edinburgh by ship; as a letter written to the solicitor Hercules Michael du Preez notes, ”it was useful for Mrs. Buckley [my Aunt] to have a gentleman to take care of her on Board Ship, and to have one by her side in a strange country.“ Although the letter was signed “Barry” the solicitor wrote on the back of the envelope “from Miss Bulkley 14th December." So it would appear that to all intents and purposes, Margaret Ann Buckley became known as James Barry [assuming the name of his deceased uncle] from that day forward. Not only that, however: Margaret’s mother has now been relegated to being ‘her Aunt.’

After his courses in literary and Medical studies, Barry qualified as a medical doctor in 1812. The family then returned to London, where he embarked upon yet another medical course as a student at the United Hospitals of Guy's and St Thomas. By 1813, he was well set on achieving his ambitions by taking the examinations for the Royal College of Surgeons, and subsequently qualifying as a regimental assistant.

From there he was commissioned in July 1813, to take up a position as a hospital assistant with the British army in Chelsea, and was then transferred to the Royal Military Hospital in Plymouth. In Plymouth he was promoted to assistant staff surgeon. At this point in his career, some sources suggest that he may have served in the battle of Waterloo.  What is known is that he was transferred to India, and then to South Africa, arriving in Cape Town between 1815-1817. Within weeks of his arrival, he was promoted to medical inspector for the colony. It was here that he became the first British surgeon to successfully complete a caesarean section in Africa, with the baby being named after him. He also organised a better water system for the region, while gaining enemies for his outspoken criticism of the local handling of medical matters.

By 1828, he had been posted to Mauritius, also taking up posts in Trinidad-Tobago and the isle of St. Helena. It was while he was serving there that he decided to make a visit to England without any prior notice of his absence. He was reprimanded for this lapse of duty.

Having carved out a worthy international career for himself, his next postings were to Malta, Corfu, the Crimea and then Canada in 1831. Having served the British Army well, and was promoted to the rank of Inspector General, H.M Army Hospitals. It was while he was wearing this title of honour that he was posted back to St. Helena, where he got himself into some awful trouble with the internal politics of the island. He was arrested and sent back to Britain, whereupon he was demoted to staff surgeon.  In 1838, he was posted to the West Indies, where he concentrated on improving housing, welfare and working conditions for the troops, For this, he was promoted to Principle Medical Officer. By 1845, he had contacted yellow fever and was sent back to England to recoup.

Dr. Barry, his faithful manservant, John, and dog, Psyche, circa 1862, in Jamaica. On his recovery from Yellow fever, he was again posted to Malta. Not a person to shy away from controversy, he took a seat in the local church that was reserved specifically reserved for the clergy, garnering him a stern reprimand. A cholera epidemic broke out there in 1850, which he managed well. After this acclaim, he was promoted to Deputy Inspector-General of Hospitals. Once again he was posted back to Corfu, where he remained until 1857. His last posting was to Canada in 1857 as Inspector General of Hospitals. In this position, he fought vigorously for better food, proper medical care, and treatment for all, including prisoners, lepers, soldiers and their families. He was noted as having a wonderful bedside manner, and was cordial with patients and their families. Further, he introduced fruit and particularly the pear as an aid to recovery for his charges. Despite this, he was generally considered by his peers to be difficult.

The doctor was known to be tactless, impatient, argumentative and opinionated, particularly when his orders were challenged. These challenges arose when he instinctively knew he could enhance the lives of his charges by insisting on better conditions for the poor, and more hygiene and better nutrition for commoners, soldiers, and even lepers. This greatly annoyed his colleagues.

Some sources suggest that he had several duels with fellow officers over his features, his voice, or his mannerisms even him being a teetotaler and a vegetarian. He was, in fact, said to have had an argument with Florence Nightingale during the Crimean War (1854-1856). After his death she wrote very scathingly of him:

I never had such a blackguard rating in all my life – I who have had more than any woman – than from this Barry sitting on his horse, while I was crossing the Hospital Square with only my cap on in the sun. He kept me standing in the midst of quite a crowd of soldiers, Commissariat, servants, camp followers, etc., etc., every one of whom behaved like a gentleman during the scolding I received while he behaved like a brute . . . After he was dead, I was told that (Barry) was a woman . . . I should say that (Barry) was the most hardened creature I ever met.

Against Barry's wishes (some sources would suggest) Barry retired in 1864, and returned to England. He died the following year from dysentery. His manservant (named John) and his dogs were his constant companions.

After his death, controversy reigned as to his sexuality. He was identified as a male on his death certificate. An exchange of letters between Registrar Officer George Graham and Major D. R. McKinnon, Barry’s personal physician, who issued the death certificate, suggest that Barry may have given birth at some point during Barry's lifetime, as a woman who tended to Barry in his final days found characteristic marks on the "lower part" of the physician's body.

McKinnon reply was curt and to the point:

The woman seems to think that she had become acquainted with a great secret and wished to be paid for keeping it. I informed her that all Dr Barry’s relatives were dead, and that it was no secret of mine, and that my own impression was that Dr Barry was a Hermaphrodite. But whether Dr Barry was a male, female, or hermaphrodite I do not know, nor had I any purpose in making the discovery as I could positively swear to the identity of the body as being that of a person whom I had been acquainted with as Inspector-General of Hospitals for a period of years.

Here ends the tale of the first woman physician to practice in the United Kingdom. Barry's life has been the subject of novels, dramas and song, with the town of Barrydale in South Africa's Klein Karoo named after him.