On this day, February 24, 1841, we remember with pride the birth of a unique Irishman, a man whose fertile mind far surpassed the greatest minds of his day.

The Battle of Hampton Roads, often referred to as either the Battle of the Monitor and Merrimack (or Virginia) or the Battle of Ironclads, was the most noted and arguably most important naval battle of the American Civil War from the standpoint of the development of navies. It was fought March 8–9, 1862, in Hampton Roads, a roadstead in Virginia where the Elizabeth and Nansemond Rivers meet the James River just before it enters Chesapeake Bay, adjacent to the city of Norfolk. The battle was a part of the effort of the Confederacy to break the Union blockade, which had cut off Virginia's largest cities, Norfolk and Richmond, from international trade. The major significance of the battle is that it was the first meeting in combat, of ironclad warships, the USS Monitor and the CSS Virginia. The Confederate fleet consisted of the ironclad ram Virginia (built from the remnants of the USS Merrimack) and several supporting vessels. On the first day of battle, they were opposed by several conventional, wooden-hulled ships of the Union Navy. On that day, the Virginia was able to destroy two ships of the Federal flotilla, USS Congress and USS Cumberland, and was about to attack a third, USS Minnesota, which had run aground.

In Ireland, an observant teacher, his fertile mind always hungry for news of world events, had read the accounts of the battle in local newspapers. He had also read the Jules Verne novel, a fictional work titled “20,000 Leagues Under the Sea.” In the book, Verne wrote about a ship that could travel underwater and thus escape detection. 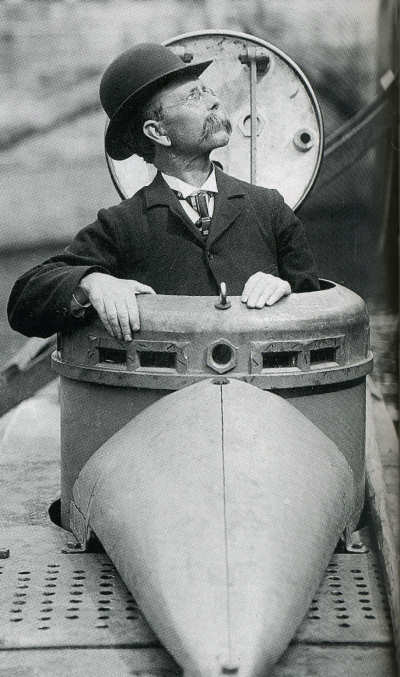 The more he pondered this idea, the teacher became convinced that all naval warfare of the future would be won by the first country to use underwater vessels to get close to iron-clad battleships and attack at point-blank range, undetected. He realized that the best way to attack such ships would be from beneath the waterline.

John Philip Holland Jr., the second of four siblings, all boys, was born in a British coastguard cottage in Liscannor, County Clare, on February 24, 1841. His father, John Holland Sr., was a member of the Coastguard. His mother, a native Irish speaker from Liscannor, Máire Ní Scannláin (Mary Scanlon), was John Holland Sr.’s second wife. Holland moved to the United States in 1873 and was Initially employed with an engineering firm. He eventually returned to teaching for a further six years in a parochial high school in Paterson, New Jersey, where much of his initial design work was completed.

Not long after his arrival in the United States, he slipped and fell on an icy Boston street and broke a leg. While recuperating from the injury in a hospital, he used his time to refine his submarine designs and was encouraged by Isaac Whelan, a local priest. In 1875, his first submarine designs were submitted for consideration by the US Navy, but turned down as unworkable. Holland’s idea was to construct a submarine to hold three men. It would be carried aboard a harmless-looking merchant ship which would come close to a British warship. The sub would then slip out a door underneath the water, attack the warship and then return to base.

In 1876, Fenians Jeremiah O’Donovan Rossa and Patrick Ford publicized details of a “Skirmishing Fund” in The Irish World Newspaper. The fund, administered by John Devoy, was set up to finance the continuing war against the British. Holland’s brother Michael introduced him to the Fenians soon after his design for a submarine had been rejected by the U.S. Navy. The secretary of the Navy called Holland’s idea, “a fantastic scheme of a civilian landsman.” Holland’s idea was to construct a submarine to hold three men. It would be carried aboard a harmless-looking merchant ship which would come close to a British warship. The submarine would then slip out a door underneath the water, attack the warship and then return to base. The Skirmishing Fund's administrators allowed $6,000 as an initial payment toward development. The Fenians continued to fund Holland's research and development expenses at a level that allowed him to resign from his teaching post. In 1881, the world's first working submarine, the Fenian Ram was launched, but soon after, Holland and the Fenians parted company on bad terms over the issue of payment within the Fenian organisation, and between the Fenians and Holland.The submarine is now preserved and on display at Paterson Museum, New Jersey.

Holland continued to improve his designs and worked on several experimental boats, prior to his successful efforts with a privately built type, launched on 17 May 1897. This was the first submarine having power to run submerged for any considerable distance, and the first to combine electric motors for submerged travel and gasoline engines for use on the surface. She was purchased by the US Navy, on 11 April 1900, after rigorous tests and was commissioned on 12 October 1900 as USS Holland. Six more of her type were ordered and built at the Crescent Shipyard in Elizabeth, New Jersey. The company that emerged from under these developments was called The Electric Boat Company, founded on 7 February 1899. Isaac Leopold Rice became the company's first President with Elihu B. Frost acting as vice-president and chief financial officer. This company eventually evolved into the major defence contractor General Dynamics.

The USS Holland design was also adopted by others, including the British Royal Navy in developing the Holland-class submarine. The Imperial Japanese Navy employed a modified version of the basic design for their first five submarines, although these submarines were at least 10 feet longer at about 63 feet. These submarines were also developed at the Fore River Ship and Engine Company in Quincy, Massachusetts. Holland also designed the Holland II and Holland III prototypes. The Royal Navy 'Holland 1' is on display at the Submarine Museum, Gosport, England.

After spending 56 of his 73 years working with submersibles, John Philip Holland died on 12 August 1914 in Newark, New Jersey. He is interred at the Holy Sepulchre Cemetery in Totowa, New Jersey.

A monument stands at the gates of Scholars Townhouse Hotel, Drogheda (the former building of the Christian Brothers school where Holland taught) in commemoration of his work. It was unveiled in a ceremony on 14 June 2014 as part of the Irish Maritime Festival. The ceremony was attended by Drogheda Town Council as well as representatives of the US, British and Japanese governments.St. John's Catholic School, where Mr. Holland once taught, has been renamed and operates as John P. Holland Charter School in Paterson, New Jersey.