'The Fall of the Celtic Tiger’: How Ireland Fell Into the Abyss, Part 2 of 2

The Brakes Slam on Government Revenue, But Not Spending

The revenue of the Irish government became unhealthily dependent on taxes derived from property sales such as stamp duty, capital gains tax, and VAT on house sales. Property-related revenues reached 18 percent of all revenues in 2006, whereas they were only been 8 percent in 2002.

But once house sales stopped or slowed down, the revenue stopped or slowed down, too, leaving a huge hole in the government’s budget. The revenue could disappear overnight, but the increased spending could only be reversed over many years. Again, a moment’s thought would have shown how dangerous it was to build a permanent spending programme on the back of a temporary stream of revenue. But very few people, in politics or outside it, took a moment to think.

How could mistakes like this be made? This question is very thoroughly analysed in “The Fall of the Celtic Tiger.”

The authors identify two tendencies of Irish policymaking, whether in the public or private sector, that were fatal:

One, “silo tendencies” within institutions, where people only think about their own immediate responsibilities, and do not question wider assumptions.

Two, a “consensus approach,” which encourages a single view to be taken of any issue.

At a wider level in Europe, and in the Central Banks, there was an underlying assumption that markets were so efficient, and participants in them sufficiently wise, that prices would always find their own level, without a crash. This mistaken assumption was backed up by academic work by economists like the Nobel laureate Robert Lucas, who argued that a technical solution had been found to depressions. The ECB Financial Stability reports, and the studies by the IMF, did not question the consensus, either about the efficiency of financial markets, or about Ireland until it was too late.

This book deals thoroughly with the mistaken belief that the whole problem was due to the Irish government giving a blanket guarantee to the banks on September 29, 2008.

The authors conclude that, while the guarantee proved to be very expensive, the alternative to giving it at that late stage would have been much worse. The guarantee did not create the debts. They were there already. The entire social and economic fabric of the country was infected by debt. All the  guarantee did was buy time, and avoid an immediate, large-scale bank run that could have had global ramifications, like the Credit Anstalt bank run in Austria in 1931.

A sudden collapse of the Irish banking system, and a chaotic collapse in the economy, an 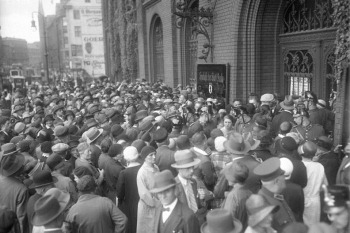 d in international confidence in the country, would have happened if no guarantee was given then.

The really blameworthy mistakes were made between 2000 and 2006, when huge and unsustainable increases in bank lending, and government spending, were allowed to take place.

(Right: A bank run at the Savings Bank of Berlin on Mühlendamm Street in July 1931.)

The story of the fall of the Celtic Tiger is about more than economics. It is about human nature.

Humans are by nature optimists. As a species, we have the confidence to take risks. We do not wait until we have worked everything out. We act on instinct, and we are more often right than wrong. That is why we have had so much material progress.

But we are also followers of fashion. We like to be part of the crowd. We like to move with the times. But, sometimes, the crowd is wrong, and sometimes the times are about to change.

A healthy society needs to build institutions that will challenge the wisdom of the crowd, and draw on history, to show that tomorrow is never the same as today. Ireland still does not really have such institutions. Discipline and conformity are rewarded, dissent is not.

In other respects, Ireland has learned some very hard lessons. It is turning the corner. There is still a major debt problem, but people are beginning to take intelligent risks again. Foreign investment has never slackened, exports are healthy, and the balance of payments has gone into surplus. The work ethic is outstanding, and people are flexible.

To be confident about the future, we need first to understand the past, and Donal Donovan and Antoin Murphy are helping Irish people to do just that, in this excellent newly published book.

John Bruton, a former Teachta Dála in Ireland’s Dáil Éireann, served as the nation’s Taoiseach (Prime Minister) from 1994 to 1997, and as Ambassador of the European Union to the United States from 2004 to 2007.  He is currently President of IFSC Ireland.  A graduate of University College Dublin, with degrees in economics and law, he is a passionate student of history.  John has graciously agreed to write book reviews on occasion here for The Wild Geese. You can get more of John's perspectives on Irish -- and world -- affairs at: http://www.johnbruton.com/.

From Tim Pat Coogan on how 'Michael Collins's expertise could have prevented economic meltdown'  http://www.irishexaminer.com/analysis/michael-collinss-expertise-co...