Marita Krivda Poxon, author of "Irish Philadelphia" (Arcadia Publishing,
2012), simply put, was born to write this book. Her skills as a research
librarian certainly played a part, as well as having managed archives
at several libraries, but not nearly as much as her obvious dedication to
preserving Irish history and the almost palpable feeling of pride and love
that serves as the overarching theme of this book about her hometown. Recently she answered some questions for The Wild Geese's Maryann Tracy.
What is the book about?
The book is a pictorial history of the Irish who arrived in
Philadelphia in the 17th century and traces their achievements through three
centuries.  It includes more than 200 historic images, which include engravings, historic photographs, and other printed material including programs, letters and charters.
These images come principally from the Philadelphia Archdiocesan Historical Research Center, the papers of the Dr. Dennis Clark and of the Society of the Friendly Sons of St. Patrick housed at the Pennsylvania Historical Society, the Commodore John Barry Club – the Irish Center, the MacSwinney Club, the Joseph McGarrity Papers at Villanova University, and the Irish Edition newspaper.
The book begins with the Colonial Irish and covers the development of the first Catholic churches, the Nativists Riots of 1844, the arrival of the Famine generation by the thousands to Philadelphia, and the place that Philadelphia played in the establishment of the Irish Free State. 20th century photographs attest to the appearances by notable Irish politicians, including Eamon de Valera to Sean MacBride to Gerry Adams.  The book also reviews the plethora of Irish organizations in Philadelphia, including the Society of the Friendly Sons of St. Patrick, begun in 1771, the various Ancient Order of the Hibernian chapters, the Donegal Society as well as other county societies, the Philadelphia Ceílí Group and
others.
Another chapter features prominent “lace curtain” Irish families from the area who amassed large fortunes including Jack Kelly, Grace Kelly, John McShain, Joseph Trainer, Henry McIlhenny, Patrick Stanton, and others. The Irish Edition newspaper's Tom Keenan has contributed many of the recent photographs scattered throughout the book.
Did your Irish roots and your studies at Trinity College
Dublin influence your decision to write this book?
I always preferred the Irish side of my family.  My mother’s maiden name was Finnegan and her own father, Peter Finnegan, hailed from County Sligo although born in Liverpool, England.  My mother, Margaret Mary, spoke lovingly of her father, who made sure she took Irish step-dancing lessons and encouraged singing of the old Irish ballads.  Her brother, my Uncle Tom Finnegan, was deeply involved with The Donegal Society at The Irish Center (in Philadelphia), serving numerous years as its president or grand marshal of their annual ball or of the annual
St. Patrick’s Day parade. I studied at Temple University, majoring in English.  I spent a summer studying in Scotland and Ireland, which convinced me that I wanted to do post-graduate work in Ireland. I was accepted at Trinity College Dublin in 1968, where I studied for over two years. I later got a degree at Drexel University and became a research librarian working in universities and colleges.
When I retired a few years ago, I began writing regional history starting with researching my own historic home and neighborhood in Philadelphia, called Oak Lane.  But I have always loved Irish topics, and a few years ago discovered the writings of Dr. Dennis Clark, a professor at Temple University, who has written at least 10 studies of the Irish in
Philadelphia.  However, he did not provide any photographic or pictorial content.  I felt that I could enhance some of his research findings and make a contribution to the scholarship on this subject in a book format that is very popular and
readable by many -- not just scholars.
Tell us about your interest in preserving Irish history. 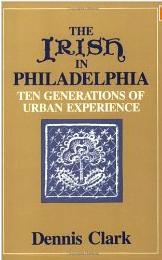 I had been in charge of the archives in a number of libraries where I worked and started to do short historical presentations with old photographs, learning how to scan and digitize them.  I feel that photographs can tell history in powerful ways that are rich and deep, giving an emotional directness and reality-based picture of the past.  I became
fascinated when I read Dennis Clark’s "The Irish in Philadelphia: 10 Generations of Urban Experience," wondering if I could find historic photographs of the people he mentioned.  As a research librarian familiar with Philadelphia’s historical societies, museums, and university collections, I felt it was a perfect fit for me to combine my
skills. I could locate and bring to life photographs that would highlight the contributions that the Irish have made in the development of Philadelphia, my home town.
Is there a large population of Irish descendants in
Philadelphia?
If you go back to 1850 or so, Philadelphia’s population was over 220,000 when Boston’s was 113,000. Philadelphia had 72,000 Irish, while Boston had a population of 35,000 Irish. After the arrival of the Famine immigrants, Philadelphia had an industrial growth rate of 54% to 65% over the course of 30 years or so.  There are hundreds of thousands of descendants of this 19th century influx of immigrants who continue to populate the city and its extensive suburban counties including Montgomery, Delaware, and Bucks counties, which participate in Philadelphia-based Irish societies as well as developing their own offshoots of groups like the Ancient Order of the Hibernians.
What makes them unique? If you take the Society of the Friendly Sons of St. Patrick as an example, I think what makes Philadelphia’s groups so unique is that our societies are among the oldest in America. The Friendly Sons predated the establishment of the U.S. by five years, being founded in 1771.  The neighborhoods in Philadelphia still maintain many of the historic churches, such as St. Malachy’s; Old St. Mary’s, where Commodore John Barry is buried; and Old St. Joseph’s, the city's first Roman Catholic church and where the first Catholic mass in Philadelphia was celebrated.  This sense of history makes this a sacred place for Irish Americans since immigrants [here] have found religious freedom as well as economic, political and intellectual advancement for centuries.
What was the most surprising thing you learned in the course
of your research and writing of the book?
I discovered a private club called the MacSwiney Club, located in nearby Jenkintown, Pennsylvania, which houses the original  minute-books of the Clan Na Gael, an offshoot of the Ireland’s Fenian Brotherhood.  Joseph McGarrity, a Carrickmore-born man. The Tyrone native made a fortune distilling whiskey in Philadelphia and funded the Easter 1916 Uprising.  The extent of the involvement
of McGarrity and other local groups in this revolution was truly astonishing for me to discover.  The Friends of Irish Freedom, started by McGarrity, raised millions of dollars for this cause.  [Future Irish Taoiseach] Eamon de Valera and McGarrity were close friends, as were many other founders of the Irish Free State.
Is there anything you found particularly challenging in your
writing? It was hard to limit the historic information in Chapter 1, where I discovered dozens of Irish-born heroes of the American Revolution, as it was to tell the story of the connection of  Philadelphia’s Irish in the 19th and 20th centuries with the establishment of the Irish Free State.  In the late 19th century, when I would read the accounts in old newspapers and pamphlets and lectures, it was hard to keep all the political movements straight since the complexity of Irish history was mirrored in the complex reactions of factions in Philadelphia.  I tried to show photographs that could mirror how history unfolded.  But it was messy and complex at times.  I tried to keep issues such as Sinn Fein and Noraid and the Troubles as simple as I could.
What’s your next project?
I hope to continue to find photographs to tell the story of the Irish in Philadelphia.  This time I want to find more photos from the 19th century neighborhoods where the Irish settled, including Kensington, Port Richmond, Moyamensing, and East Falls.  I hope to also write feature stories on some of the prominent Irish persons, like Grace Kelly and her Irish Library in Monaco, Henry McIlhenny’s Donegal Castle and other such topics. WG