Many cultures throughout the world lay claim to having heard or seen the Banshee. Many stories of the Banshee can found in America; the most prevalent of these sightings are said to have happened during the 18th century and came near Tar River, in Edgecombe County, North Carolina. In these cases, however, the banshee was more of a ghoul rather than a banshee foretelling of a death or a disaster.

In the badlands of South Dakota, a banshee is said to sit and wail or keen near Watch Dog Butte. Like any other stories of banshees in America, this folklore does not connect her to any malevolence, misfortune or death (except perhaps her own).

Her titles include ban nigheachain (little washerwoman), that is, the Scottish Gaelic banshee; Bean Sidhe, the Irish banshee, variously referred to as ban sith and bean sidhe, and who may, perhaps, have similar connotations to the Welsh and other Celtic communities. This shared heritage may be due to the Norse influences of bygone eras, when the Norse invaded Ireland. In other Celtic communities, for example, in mythology, a similar being is known as ‘ben nighe’ or ‘bean.'

Many In Ireland believed (and some still do) that this supernatural being [the Banshee] wails, laments, and screeches mournfully at night to foretell the death of a family member – only families, however, who are of true Irish descent -- as only people of true Irish descent can hear this supernatural spirit. This would include people, for example, whose surnames begin with an O, Mac, or Mc.

Interestingly, the Welsh counterpart, gwrach y Rhibyn (witch of Rhibyn), is also said to visit only those families of true old Welsh stock … and she is also known as the "Hag of the Mist." Sir Walter Scott, the Scottish novelist, has also mentioned a belief in a kind of banshee or a household spirit that followed certain Highland families.

In Ireland, for example, the Banshee is more generally thought of as an Irish myth, folklore, or legend, or perhaps a combination of all three. So real is the banshee to some people in Ireland that they live in fear of hearing the angry keening banshee, as they lay in their beds at night. Around midnight or the early hours of the morning is when, or so it is thought, she is most likely to visit and keen angrily, to make those people with an ‘O’  ‘Mac’… ‘Mc . or Kavanaghs aware that one of their ‘loved ones’ are going to die.

The Kavanaghs (also Kananaughs, or Cavanaghs) ruled Leinster from 1357 to 1417, in the guise of Art Mac Murrough Kavanagh. Family members came to expect a visit from the banshee to announce the imminent deaths of family members -- or foes -- and listened intently for her.

During the Famine years and beyond, some sources would suggest that the Banshee came and keened angrily every night. [Read the reference in my book, "That’s Just How It Was".]

The Banshee in folklore has many different disguises: She is either a beautiful young woman or an old hag, she has long black hair, combing it all the while, and if she throws the comb at you – it is certain death -- or she's seen as a very pale old woman with red hair wearing a green or black dress or a shroud.

One theory suggests she appears as a beautiful young woman wearing a long shimmering silver dress. Then, of course we have the washerwoman who has a bowl of blood-soaked clothes, washing all the blood off them, screeching, wailing all the while. One depiction has the Banshee standing, holding a bowl of blood with her severed head lying in her arm.

Then, of course, we have the Hollywood portrayal of the Irish Banshee—where she stalks her victim, wailing, screaming at them, till the victim goes insane, and she rips their heart out with her bare hands. Some sources would suggest that the Irish Banshee was actually a woman of nobility who was brutally murdered by Crown forces, as far back as the 13th  century – and she then roamed Ireland to warn other ancient Irish families of their imminent death. Human banshees are also said to have attended the great houses and courts of Irish kings, keeping them informed of the forthcoming death of their foes. Stories of the Banshee have been passed down from generation to generation, more oral tradition than from the written word. As recently as 1948, stories have been told about a man who saw an old lady standing outside his front door, on his way home from a night out, a little the worse for wear, and it was said he tried to speak to her. She backed away and kept pointing at his door, wailing all the while.

When he entered his house; his mother was standing just inside the door. He told her about the old lady outside and she told him she knew who it was; telling him to go to bed. The next day the mother’s brother was found dead in bed.

In my own case, my grandmother was a firm believer in the Banshee; and, at night, while we would be tucked up in bed, all three girls sleeping in the same room arguing about whose turn it was to sleep in Granny’s bed. Bearing in mind that in this era, circa 1945, folklore, myth and legend were commonly discussed. Granny O’Rourke would ask “Do you hear the Banshee?” and then say, “I wonder who she is coming for tonight.” As children, safely tucked up in bed beside her, we would pester her to tell us about her childhood, where the Banshee was ever prevalent.

As noted by other family members of Granny’s, she was said to have heard the Banshee the night before all three of her sons died, an assertion family members verified then, with one daughter telling her to "Stop it. You're frightening us."  Within 48 hours of Granny saying she heard the Banshee, one after another of her sons died, in 1927, 1949 and 1960.

Folklore, myth, or indeed legend, my childhood was interspersed with visiting the dead to lay them out, and listening to my Granny’s stories about the banshee. At 71 years of age, I know that my Granny’s skills as handy-woman to the community, of making potions to ward off illness, telling stories about the Banshee, or just being a grandmother, have all enriched my life. I look back on my childhood with the warmth that my Granny created.

Comment by Michele Desrosiers on September 20, 2015 at 10:39am
You might enjoy this family tale...my mother's father was a Campbell which is Scottish not Irish but as a girl she lived for awhile on her Aunts farm. She told me they were awoken one night when all the dogs at all the homes on Campbell road began to howl simultaneously. They soon learned that her grandfather, the patriarch of the family had passed. She said she would never forget the sound of the dogs howling. Perhaps a banshee set them off.

That's a fascinating story, Michelle, and suggests there is indeed something to this phenomenon. I'd love to hear more from fellow members on this this.

It is a tale I have heard so many times over the year; either dogs are barking at the Banshee ;or the Banshee is inciting them to bark; to make the family aware that she is around .

Another myth is that she gets the chains of hell to clink against each other.

At the risk of sounding somewhat unbelievable, I'd like to share this banshee story and see what you think - I had a Granny O'Rourke too - she lived outside of Carrick On Shannon in County Leitrim.  She was actually my great grandmother.  Her daughter Kate, my grandmother, came to New York in 1913.  One of my grandmother's nieces moved to England and went back to the old home in Leitrim in the late 1970's to visit.  She sent my mom several pictures of the old homestead.    I inverted the colors on the scan I did on one of these photos which was right by the front door to the cottage, which created something like a "negative", and noticed something unusual.  I cropped it out, adjusted the contrast, and found myself looking at this:

The figure is just to the left of the door.  She is about three feet tall. The area in the same uninverted photo is just the plain whitewashed stone wall of the cottage.  I have puzzled over this for a long time.  Seems to me, she fits the description of a real banshee.  And no, I'm not a nut, and I didn't add anything to this photo that wasn't already there.  I wouldn't waste anyone's time with a fake photo.  What do you folks think?

Comment by The Wild Geese on April 2, 2016 at 2:37pm
It might help if we could see the original picture uncropped in a sequence with this picture. The picture above just seems blurry and indistinct.

Here is the original photo, the inverted photo, and a clearer version of the image.  The image is not crystal clear, but I do see two legs, two arms, a head with indistinct facial features, and hair where there should be hair.  It definitely seems female, and she appears to be dancing/ while waving something in her right hand up over her head.  She is wearing the same kind of dress as the picture in the blog above.  Or maybe it's me.  Maybe I'm just seeing things.  I don't know, which is why I posted it here.  You won't hurt my feelings if you don't see it too.  :) 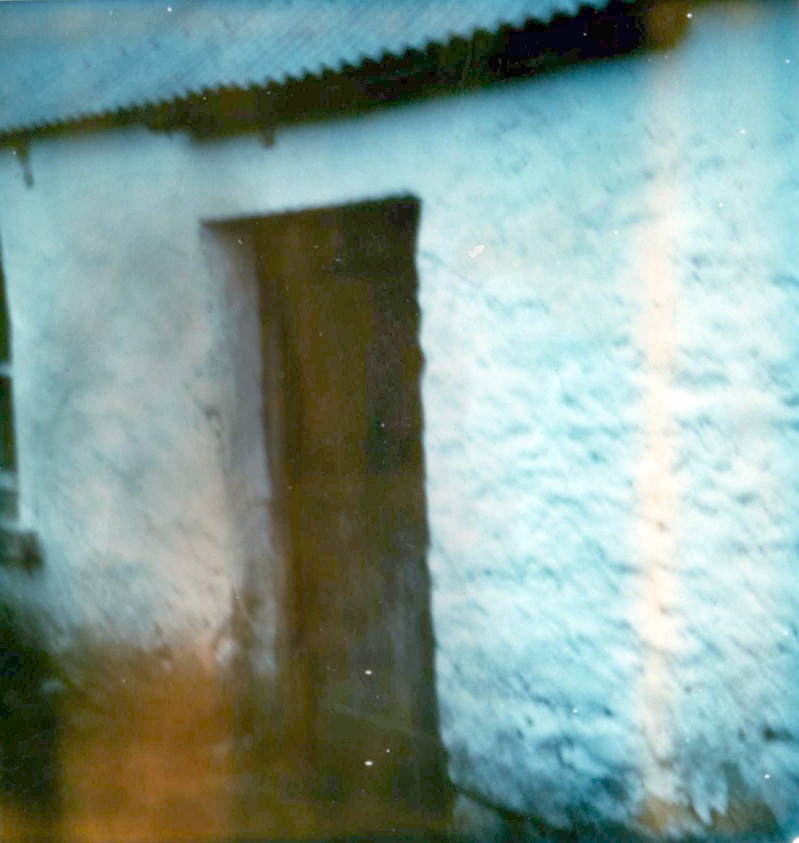 There are other unusual things in this photo as well.  That's about the best I can do.

Hello Douglas S Hart . Thank you so much for taking the time to upload these photos.Like Gerry said the first photo is a blur.... However , in the following photos , I think I am seeing the shape of something [!!!] , like a shadow if you will.

I was brought up mostly by my grandmother, and her belief in the banshee , was very real . Interestingly, when she said that she had heard the Bansee and someone in the family was going to die... a family member did die..  ... Her husband , her two adult sons died after she had heard the banshee the previous night over a period of years.....

I have written her story .. That's Just How It Was   .. Click on the link below to view my video