The Harp -- The Oldest Emblem of Ireland

The oldest harp on which the ‘official’ national emblem of  Ireland is based is housed in the Long Room at Trinity College, Dublin. Two other medieval harps that have also been preserved from that era, are housed in The Museum of Scotland: The Queen Mary Harp 15th century - and the Lamont Harp [date being uncertain].

Depending on which sources one reads, Brian Boru was an accomplished harpist, who belonged to the Dál gCais clan. He was the last High King of Ireland and was apparently known for having harpists and other bardic arts personally surround him. He patronised harpists and poets in his clan. Other sources would suggest however, that, unfortunately for Boru, the Brian Boru Harp is not his, as this harp dates long after his life and death ,and there is no basis for this legend on any historical level. There is one suggestion that Brian Boru’s son gave the harp to the Pope as a penance! Then apparently, the Pope, in turn, gave it to King Henry VIII and it found its way back to Ireland when Henry gave it to the Earl of Clanrickarde. Yet there is no evidence that can be found to substantiate Boru's skilled accomplishment as a harpist.

In the 10th century, Boru was assassinated by a rogue Viking while he was praying and giving thanks on the victory of the Battle of Clontarf. He was perceived as one of the most revered and respected leaders and as one of the most  dignified members of the Da gClassiams clan.

The origin of the legend of the 'Bloody Red Hand of O’Neill' which is also associated with the Irish Harp, has been lost in the mist of time. Hugh O’Neill is infamous for being known for The Red Hand of Ulster, and there have been countless myths written about this subject.

According to one myth, the Kingdom of Ulster had at one time no rightful heir. Thus the story goes that tells of the arrival of Heremon, Heber and Ir, sons of King Milesius of Spain [Galicea], who saw an Island in need of a king, so being the King of Spain, he used this to his advantage and recklessly pursued the idea that one of his sons would take the title of King of Ireland. His sons Ir and Heber were dispatched to conquer Ireland about 504 B.C. [Long before the Harp became known as the Irish emblem].

As myths go, and subject to whichever myth one believes, they have transcended down the centuries with the idea that the right to the title of King of Ulster was to be bestowed on the one whose hand was first to touch the Irish shore.

One myth would have us believe that one of the brothers cut off his hand and threw it onto the shore so that he would be the first to claim the land. The second myth was that a boat race would take place between the brothers, with Strangford Lough being suggested as the lake on which this race took place. The third myth is that the hand belonged to one of two giants engaged in a battle for the title of Heir to the Kingdom of Ulster, and it was this hand that was the first to reach the shore -- which left a red imprint on the coves at Strangford Lough. 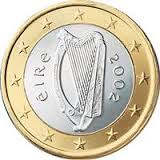 However, other sources would suggest that the one myth that has survived above all others, was that  that it was the Ui Neill Tribe [Hugh O’Neill]  whose Red Hand it was. Also, in early Irish history is the fact that the Irish Harp did have a red hand emblazoned on it,  and would therefore suggest that it did belong to the O’Neill clan at some point in the mists of time.  These sources would also suggest a strong indicator of who can claim the construction of the only surviving medieval harp. ...

Now then, over the centuries, however,  there have also been countless theories about the harp's ownership or indeed who it was actually commissioned by. All of these theories continue to be passed down from generation to generation, so suffice it to say that over many, many a millennium, it passed into the ownership of one Henry McMahon of County Clare [who remains unknown]. But finally, the ownership was passed to The Right Honorable William Coyngham of Slane Castle who presented it to Trinity College, Dublin, in 1760 where it has remained on display. When we travel back further in the annals of history, some sources would suggest that the oldest known Greek historian, Hecataeus of Miletus (around 500 B.C.) described the Celts of Ireland as “singing songs in praise of Apollo, and playing melodiously on the harp.” [Appollo became Phoebus in Greco-Roman mythology, a deity of manifold function and meaning, one of the most widely revered and influential of all the ancient Greek and Roman Gods]. Hence, the Irish Harp has been perceived as the central instrument of ancient Irish culture. And as most people are aware, paganism was a forerunner of the Roman Catholic faith with many of their traditions being incorporated  into that faith. So it is not 'rocket science' to take a leap of faith to understand that the harp did belong somewhere in Ireland, and that we still are playing melodiously upon it, albeit not as prevalent as it was back then.

Today, the representation of the traditional harp can be found on all presidential and official documents. It is on our passports, on the Leinster Flag, the Euro Coins and is also the logo for numerous prominent supported organizations. The harp has been used extensively by business and other corporations, wishing to convey the “Irish-ness” of their product, from Guinness to Ryan Air with its heavily stylised harp on the tail fins of the budget airline carrier.

Then we have the song titled, “The Dying Rebel,“ with the words –

He fought for Ireland, and Ireland only,
The Harp and Shamrock, Green, White and Gold.

And there we have it.

Great research Mary and a pleasure to read.

A most  mesmerizing  posting.   Definitely  sheds light on the various  myths that surround  the  harp, ownership, origin, history,  etc..  Great  researching.  A very  pleasurable  read !!  Thanks  much  for posting  this.  >>

Thank you Patrick O'Leary again....... It is very much appreciated when people  from all over the world make positive comments , on what has been an enjoyable experience for me .....