Toru Tazura O'Connell, the Public Relations Director of the Irish Network Japan was kind enough to send in the following thoughts about St. Patrick's Day celebrations in Japan.

The INJ is a non-profit volunteer organization whose central purpose is to promote Ireland’s culture, traditions, and people in Japan. It also assists Irish people here, and promotes exchanges between the two countries. It’s free to join, just subscribe to our mailing list  for regular updates on INJ events and parties, and any Ireland-related goings-on in Japan.

How much does the average Japanese person know about Ireland or St. Patrick’s Day?

According to the Japanese I’ve met here at DCU, their friends didn’t know where Ireland was. They asked if it was near Iceland!  In fact, there are no stats like a CSO IRELAND as for St. Patrick's Day.  Someone said Ireland is famous for Volcanic Eruption (Iceland).  Someone said Ireland is notorious for an act of terrorism (oh my).  But most of Japanese knows Ireland thanks to Eire culture.

How do the Japanese know Ireland and St. Patricks Day?

Also, Patrick Lafcadio Hearn is a famous musician and writer among Japanese. TV commercials, TV programs, and movies like "Once" and "Titanic."

And most Japanese have no religion. So it is natural that there are few people who know St. Patrick in Japan.

For the organizers and volunteers involved in the St. Patrick’s Day festivals, what are their favourite parts of Irish culture?

Music (inside pub), pub culture, sports, and the character of the Irish People (best hospitality).  Japanese who traveled to Ireland say that all would like to go to Ireland once again. 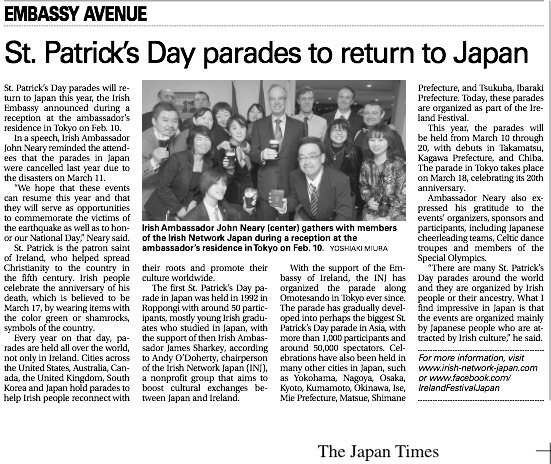 How many participants are involved in the festivities?

How many spectators usually come to check things out?

What are some of the most impressive floats or exhibits in the parade every year?

What other activities go on during the day besides the parade?

How does Japanese culture make the St. Patrick’s Day festivals in Japan different from those in Ireland?

They are almost the same.

Outside of St. Patrick’s Day, what else is Irish Network Japan involved in during the year?

There are a lot of sponsors listed on the website. How do they help INJ organise their events?