St. Patrick and the Skerries 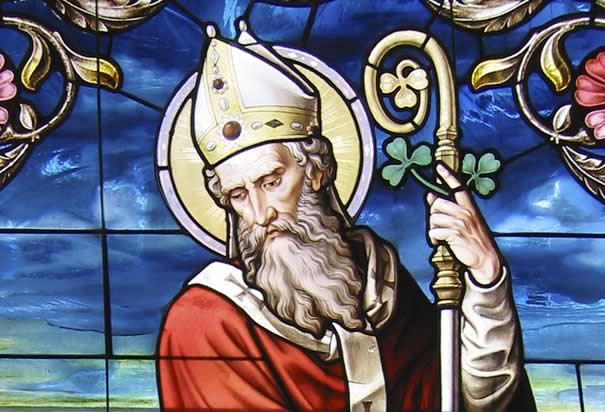 Saint Patrick was born into a well-to-do British family, perhaps in what now is the North-Western English county of Cubmria. His father was a local government official and the family language was probably a version of Latin. As a youth he was captured by Irish pirates and taken into slavery in Ireland where he spent many years as a shepherd before escaping and returning to Britain. He entered the priesthood and inspired it is said, by a vision, he returned to Ireland as a missionary probably in the 432 A.D.

The 7th Century writer, Tírechán, wrote that Inishpatrick off Skerries, was the ﬁrst place on which Saint Patrick set foot on his return to Ireland as a missionary. It was near here, somewhere close to the mouth of the Delvin River, that Saint Patrick converted his successor Benignus, regarded as the ﬁrst native Irishman to become a bishop.

References to the island after 798 A.D. are few. In 1148 a synod was convened on the island by Saint Malachy. This assembly of over two hundred, priests and bishops, was summoned to nominate delegates to travel to Rome to obtain the pallia or insignia of archbishops signifying the ﬁnal re-integration of the Celtic church with Roman discipline and organization after centuries of diverging practices. The island was almost certainly chosen as the site of the synod for symbolic reasons as it was recorded as the ﬁrst landfall of the apostle of Ireland.

When St. Patrick landed on a small island off Skerries. It became known as St. Patrick's island in his honour.

Legend has it that when the saint arrived on the island he was accompanied by a goat which provided milk. From this island St. Patrick would come to the mainland to convert the people. While the saint was ashore on a missionary trip the people of Skerries visited the island and stole his goat. They killed, cooked and feasted on it. When St. Patrick came back to the island he found his goat missing. This made him very angry and in two giant strides he reached the mainland. The ﬁrst step took him to the back of Colt Island, the second to Red Island where he confronted the people of Skerries. They tried to deny having seen his goat but found the beast cried out from their bellies. When they told the saint the truth about his goat their voices returned.

To this day St. Patrick's footprint (pictured at left), where he stepped on to the south side of Red Island, can be seen in the rocks and to be called a 'Skerries Goat' means that you truly belong to the town. There is a tradition of making a secret wish, when putting three ﬁngers (The shamrock) into the water in the footprint.

St. Patrick's Island is so called because he is said to have founded a monastery here, which flourished until the Vikings raided. In 1220 the Archbishop of Dublin issued a directive to move the Monastery to the mainland as the island was found to be too inconvenient.

There still remains the ruins of an early 12th century church on St. Patrick's Island. Look through the last remaining window frame and you'll see the silhouette of a bishop, a clue to the island's history.

In the town itself there is the remains of a church tower dating from the 18th century. Three Christian denominations, Roman Catholic, Church of Ireland and Methodist have churches in the town today.

Krystyna over at www.VisitSkerries.ie was kind enough to let us use the following information about St. Patrick and his association with the Skerries from their website.

Great short history on St Pat in Ireland. I think I'd like to add St. Patrick's footprint to my bucket list of Irish sites! ;)