Which was my reaction on seeing the award-winning (very) short film "Spiorad na Samhna -- Spirit of Samhain," advertised as exploring “the origins of Halloween in Ireland.” By Irish filmmaker Dessie Baker, it won Best Short Documentary Award at this year's Underground Film Festival in Cork City. The festival screened 122 films in 15 categories, with entries from 35 countries, so this is no small accomplishment. 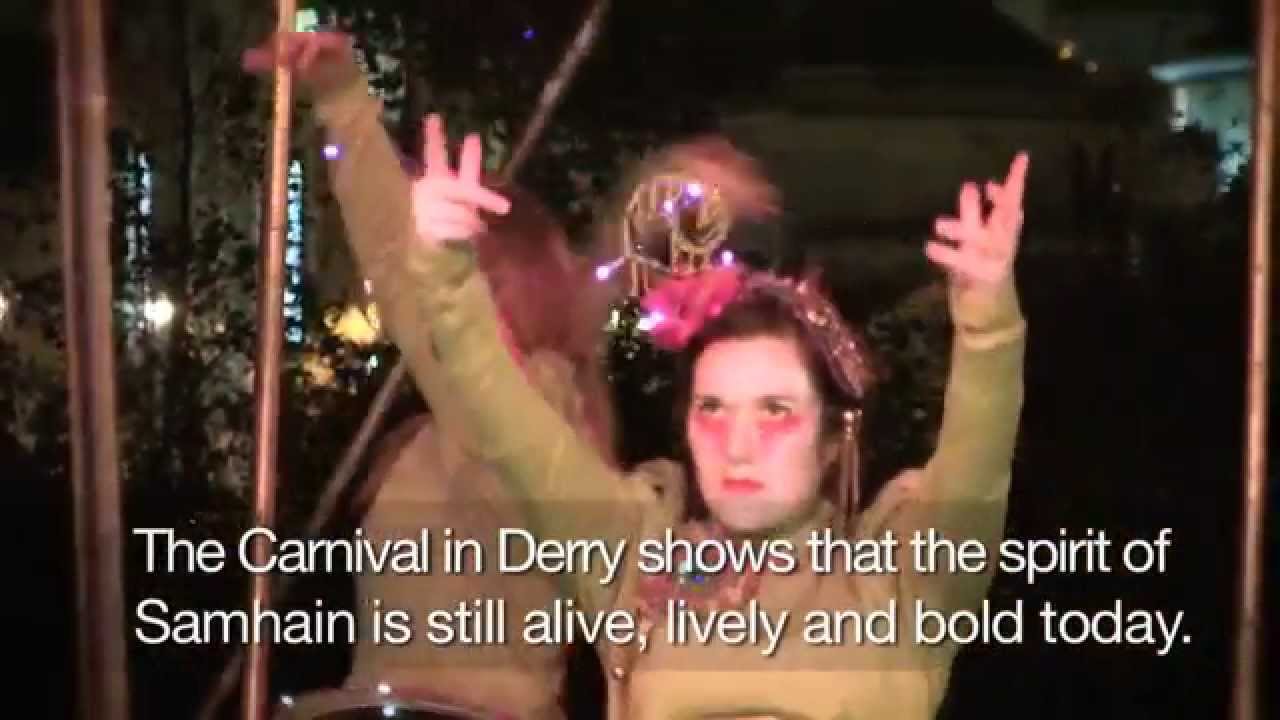 That said, there is more frosting on this cupcake than substance. It loosely treats of the tradition of ancient Irish celebrations, as best we can ascertain from a culture that left little in the way of writing or historical artifacts, and the holiday’s modern celebration in Derry, that started with a costume party in a bar and has grown into a city-wide event. The narration of the traditional dimension is in Irish, with English subtitles, and the history of the bar party is told by modern photographs and people who were there.

I suppose it is a compliment that we are left wanting more. The 8 minutes and 34 seconds do not let the creators do more than scratch the surface, and the video does little to enlarge the speculation of the narrative. When exploring the traditional dimension, we have lots of images of bonfires, and occasional shots of one group of dancers, who reappear in the later segment of the modern celebration. We get very short clips of the modern celebration, but never enough to establish any connection with the tradition, and that is a significant lack.

So we have a loose theory, some interesting brief film clips, occasional reminiscences about the short-term effect of a costume party in a pub, and creative use of bi-lingual narration. When the first clip is accompanied by music from a Harry Potter film, I started to worry. I expected more exploration of the use of costumes and the parade as an act of rebellion in the worst days of Derry’s troubles -- I was again disappointed.

I am left hoping that there is a significant film about the “origins of Halloween in Ireland” still waiting to be made. This brave effort is neither that film, nor does it provide evidence that there is enough material to sustain such a film. I hope someone might pursue the topic in broader scope, and, at the same time, in more detail. It only takes 514 seconds, so view the film; but it’s a cupcake, not a full dessert.

Many people all over the world see Halloween as a Pagan Holiday- there are however, two traditions that have melded in one from the time of the Celtic festival of Samhine, that is celebrated on the 31th October . Then in the eight Century Pope Gregory designated November the 1st as a time to celebrate all Saints and martyrs. Over the next centuries, these celebrations evolved into what has become a child friendly celebration when all children go trick or treating; with bonfires being the backdrop of showing the light.

As children we would go trick or treating, but we were never allowed to go near bonfires because superstition had it that this is where all the evil spirits would gather. We were encouraged to go into a Church to say a prayer for these evil and for all those spirits who may be tormented by the misdeeds in the human lifetimes.   An interesting article Fr. John R Sheenan