It’s a long story. But maybe today, I’ll just tell you about the short film that I produced as part of my artist’s residency in Ros Muc this year.  It’s a collage of images, all merging from one to the next, telling the story of Patrick Pearse and my grandfather and my father and the influence and inspiration of Ros Muc from generation to generation. (There’s a link to the film below.)

According to the writer Pádraic Óg Ó Conaire, my grandfather was staying with Pearse in Ros Muc and he was the one in charge of the magic lantern, an early version of the slide projector. At night, they projected images onto the wall outside, as part of the festivities of Fleadh an Turlaigh Bhig and this was the first time that anyone in Connemara had seen anything like it. So we decided to project my film as a special commemoration of this event.  Here's a link to the film :

I was taking part in the Pearse Summer School in Ros Muc, where I showed the film, titled, "Ar Theacht an tSamhraidh," but afterwards, when everyone had gone home, my brother and I went back to Pearse's cottage and we stood there in the twilight and watched as the images appeared one after the other on the whitewashed gable end of the cottage. It rains more often than not on the west coast of Ireland but that night, we were blessed. The rain held off and the projection went off without a hitch. 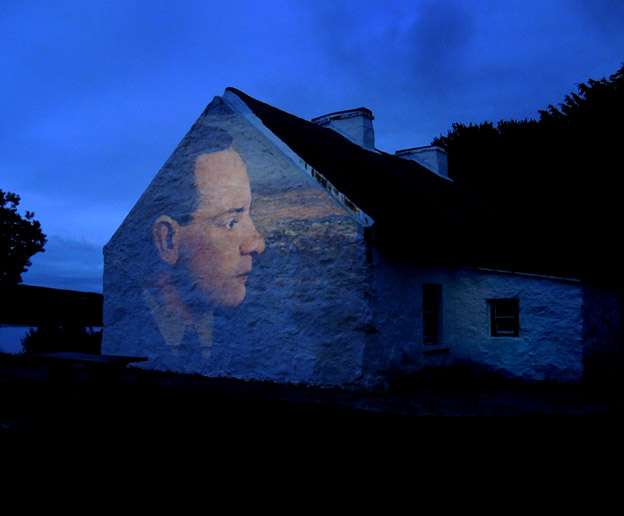 I've been working between Dublin and Connemara all this year so if you're interested in reading more, you can visit my personal blog at https://emacl.wordpress.com/ and (in Irish) at https://rosmuc2016.wordpress.com/.