In a secluded glade of ancient trees nestled against the breast of the Burren, a landscape so surreal and old it seems the surface of a planet in a galaxy far, far away, the ruins of yet another holy structure keep watch over a whispering waterway known for its healing properties.

Moss twines around the twisting trees, and lichen [the sign of an environment rich with oxygen, says our Wild West Irish Tours guide for the next few days, perky pedagogue "Pius" Murray] hugs the bark and stones that gesture grandly as only pure nature can toward a cavern at the top of a steep, damp hill.

It is here the hermitage of St. Colman occurred; in singularity for devotion and solitude. His Holy Well is one of supposed healing of eyesight, much like another well we visited earlier in the day [that Pius mentioned may also have been used for letting go, for insight, and introspective growth], albeit, according to accompanying Irishwoman Geraldine, this may have been a Christianization covering up the concept of visiting one of these wells in search of wisdom. This was of particular interest to folklore enthusiasts as the pathway leading up to the Burren, for example, was tunneled by a copse of constant hazel trees. For those keeping score, the hazel tree, one of the nine sacred Celtic trees, was the tree of wisdom.

You might know the story of Finn McCool and the Salmon of Wisdom. How did the salmon get so wise? It ate the hazelnut from the wise old hazel tree, of course -- and Finn in turn [accidentally] ate a bit of the salmon whilst burning his thumb cooking it for his druid mentor, Finnegas. The story was, perhaps, an allegory for those desperately seeking wisdom -- to just allow the universe to take care of it. What is meant to be won't pass you by, as they seem to say around here.

Journeying into the wilderness of the Burren was something that seemed meant to be. To take in the sight of spiraling mountains, the two leaps of the devilish Pooka on the craggy cliffsides -- to hear the whistle of the soft breeze across the cracked and untamed karst accompanied by the occasional trickle of water or bleating of foothill goats ... at the steps of the steppes that seemed to be in a constant shrug towards heaven, one can understand why pilgrims took [and still take] the journey across such raw terrain -- and even why someone such as St. Colman settled there, tucked close to the heart of the towering slopes for his sanctuary and reflection.

Pius advised us on our sojourn -- not only pointing out the way the spirit could be revitalized through conversation and communication with others about the flora [which he described with equal parts accuracy and delight], but also ... with individualization. Or, not so much individualization, as Pius encouraged us to move away from the ego. To put down the phone or the tablet or the camera and simply experience things firsthand. "Exercise is the gateway to the spirit," he'd said. It gets you away from internalizing and the ego. Meditation is also key. He gave us silence, and a mantra to follow -- to count our steps and focus in on the senses. Senses that took in all I mentioned before and so much more. We walked in total tranquility, each of us clutching a stone whose rough edges represented our troubled thoughts -- but our thoughts were not about us, but the steady mantra of 3-1-2-3, over and over again, until we reached the next part of our presentation to nature.

And it was rather like being presented to the wildness of the spirit. To be in the presence of unforgiving wildness that was not without mercy was something extraordinary. It was incredible to see how the world of Ireland began, with its natural occurrence of pure water first visited by ancient pagans, then by the Christians who sought to contain, canonize, and capitalize on it --

However, years of nature being itself proved at each site that nature can escape and reclaim anything man seems to make for it. It's evident not only in the way the moss and roots reach up to wrest stones out of place, or how water weathers away the wondrous old architecture mankind built to contain it, but also in the way the very countryside's history is slowly being swallowed by the shrouds of strong ivy or sunk into the bog. It is a quiet, but firm understanding of the Irish that they see their memories scrawled into the surface of each building -- they see the bad that comes with the good, the duality of acknowledgment and defiance in letting the Earth reclaim what's hers despite whatever memory came with the article in question.

Pius has nothing but love for the landscape he seems so very much a part of -- a tall and energetic man who is much a mountain brush as the scrub itself, he informed us of how the natural world gets along with itself in the most impossible ways in the Burren -- how alpine, Mediterranean, tundra, and Irish flora all intermingles with ecosystemic impossibility, yet flourishes in absolute harmony despite differences ... something we could all use further reflecting on, I think, as a species.

[Albeit Pius did point out it's been an absolutely dismal year for hazelnuts: Not much wisdom to be found outside those who already have it this time, I'm afraid. So who knows.] Too much analysis can lead to paralysis, so Pius mentioned. To overthink is to be ego, and to be ego was not to be fully present whilst walking in the Burren. In a life full of constant distractions, materialism, and commercialization, there was an unbridled joy I took in climbing into the trees and the dales to seek shelter where a man surrendered everything to be closer to the Spirit and nature. A man who lived in poverty beyond poverty to enrich his soul and the world around him in the humblest of ways. It was freeing to step into the cave he'd supposedly dwelled in and sit in the darkness for a while--to lay a hand on the oratory and curl my fingers around the cyclopean masonry, noting that behind the seemingly steadfast face of enormous stone, rubble and debris waited within.

And that's a good metaphor for the human spirit, I think. To build up one seemingly perfect defense through which no one can see -- but behind that wall is an enormous pile of jagged self-doubts, worries, frustrations, and tumultuous disorganization. It even parallels with entering this world of the Wild Irish West in that the cracks begin to form, and, for sure, a fissure emerges through which you can see yourself and who you truly are.

You have to let go of yourself to find yourself at times.

But take what I say with a little grain of salt --

Or a hazelnut, if you can find one.

What sight do pilgrim eyes behold

The embrace of the mountain breast

Against which saints wept; confessed

their deep love of wild sea

of sleeping rock and stolen stream,

a poet's sojourn and one saint's dream 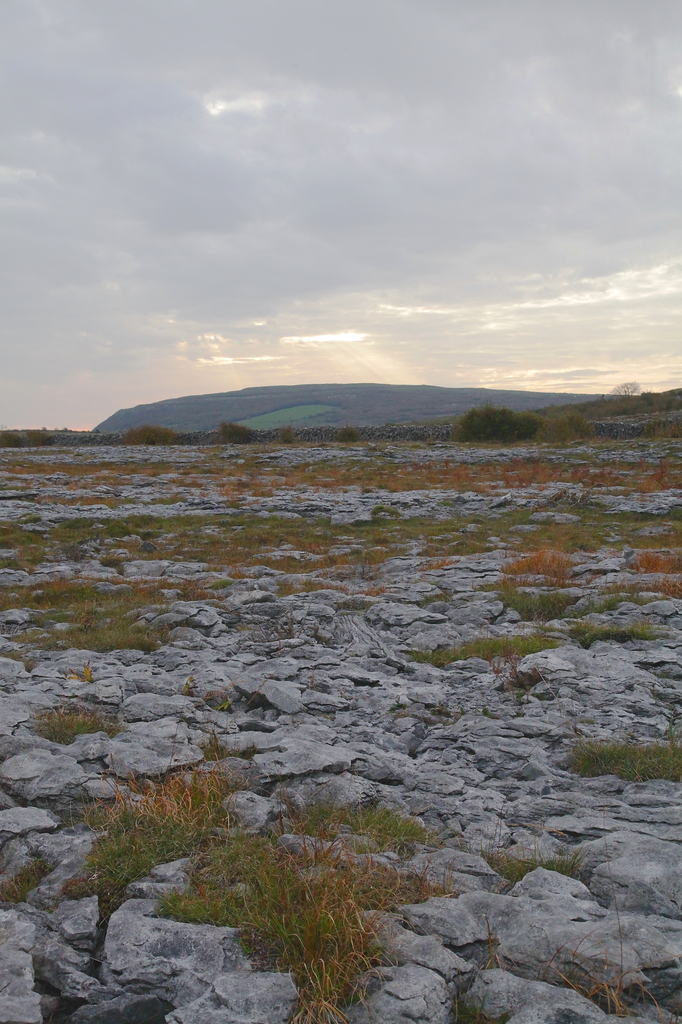