(First published 2/2/12) Dubliner Brendan MacQuaile’s book and one-man show, both titled “March Away My Brothers,” may be reflective of a new objectivity the Irish are now able to evince about the experience of their ancestors and fellow countrymen who served in the British military during World War I, when at home thousands of Irishmen and women were laying the groundwork for the military struggle against those same forces to subvert Ireland’s link to Britain.

MacQuaile, a baritone, has drawn upon his singing chops and interest in the Irish experience during the war for his show, which dramatizes the service of Lawrence Kelly during “The War to End All War,” when Kelly served in the British army. TheWildGeese.com’s Gerry Regan ‘chatted’ with the Sutton resident last week, via Skype, about the phenomenon of “March Away My Brothers.”

TheWildGeese.com:  How did you come to focus on the music of the Irish soldiers who fought for Britain in the Great War?

Brendan MacQuaile: I'm a classically trained singer, baritone myself, and I have always had the interest in songs and music, but I added to this with a group of friends who travelled to some of the battlefields.

TheWildGeese.com: Did that travel occur because of a previous interest in World War I history, and particularly its Irish context?

MacQuaile: The travel came on account of an interest in the people who served, rather than the history itself. I have a number of friends who had a grandfather or other relation who was killed. We started tracing information about these guys and then travelled to find graveyards and graves.

TheWildGeese.com:  Did you have an ancestor who served during "The Great War"?

MacQuaile: I had an Uncle Charlie! Well, we called him an uncle … He was a removed relation on my father’s side, but it was my friend’s grandfather John Moyney, V.C. [a recipient of Britain’s Victoria Cross] who got my interest started. I have written a one-man show, called “March Away My Brothers, the same name as my book, and the show tells the story of another friend’s grandfather, Lawrence Kelly, just an ordinary guy who worked for Guinness [Brewery] in St. James Gate, Dublin. He was blown to bits at Passchendaele on the same day and almost in the same exact spot as Francis Ledwidge, the [Meath-born] poet.

TheWildGeese.com:  Tell us a bit about the service of 'Uncle Charlie'? His full name, regiment, age when enlisted.

MacQuaile: I don't have very much about him, He was Private Charlie MacQuaile, and he fought with the Dublin Fusiliers in Gallipolli, Turkey. I met him only once when he was dying in a Dublin hospital. I was only a small child at the time. There is very little family history I can find. Unfortunately, if you didn't actually die in the war, there is not much official information available.

TheWildGeese.com:  Is this dearth of information reflective, perhaps, of Irish attitudes toward those Irish who fought for the Crown during The Great War, that the service was far from exalted, but rather often seen as unfortunate at best, shameful at worst?

MacQuaile: During my education in the 60s and early 70s, we learned little or nothing of this period of Irish history. We knew the color of Padraig Pearse’s eyes, but little else seemed to permeate through. Ireland had one of the first railroads in Europe, but we didn't hear about that. Unfortunately, the 'local' situation of Easter 1916 seemed to blot out any other history.

TheWildGeese.com:  Canon Charles O’Neill penned the lyrics of "The Foggy Dew" in 1919, after watching an early session of Dail Eireann. He famously wrote, "‘Twas far better to die ‘neath an Irish sky, Than at Suvla or Sud el Bar." Is that attitude indicative of that carried forward by the families of the 200,000 men who served Britain in the war, in your view? Indeed, by the irish nation, too?

MacQuaile:  Yes, of course, we had a 'local' problem to deal with, and this was bound to focus our attention in the 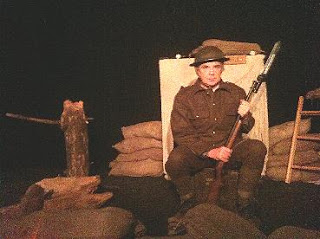 years after the war. It's just a pity that it also served to eclipse a very interesting time in European history and made us, at least in educational terms, a bit parochial. I believe we are only now moving toward a maturity that will allow us to discuss these matters more openly. World War I has now truly moved into history, as there are no survivors left. Having said that, I have been amazed and, indeed, shocked to hear the anger expressed by some of the people I spoke to while researching the book. Anger at 'why' their ancestors should have gone to war when they 'had no need to go.’ I believe, however, that Ledwidge got it right when he said he did not want other fellows fighting for freedoms that he would enjoy later on.

TheWildGeese.com:  We ask because we are wondering if you could have written this book, and performed this show prior to, say, the Good Friday Agreement. Has there been a watershed in Irish attitudes that now creates the market for these stories, or has the shift in attitudes been incremental? How long have you been working compiling information for the book and show?

MacQuaile: It's difficult to know exactly. Opinions have never been entirely one way or the other. I'm not sure the [1998] Good Friday Agreement would have made any seismic change in attitudes to theatre or literature here in the South, and I'm not sure how my book and show will do today in the North. But the modern reality, in both the north and south of Ireland, is a growing appetite for this past, and the Queen’s visit to Dublin has helped to focus that a little on the First World War. But we are all now interested in the centenaries … Titanic, [the iconic song] “It's a Long Way to Tipperary,” World War I and, indeed, [The Easter Rising of] 1916.

TheWildGeese.com:  When did you decide to write a book on these songs, and create a show? Which decision came first?

MacQuaile:  I started over a year ago after listening to Cormac McConnell’s wonderful song  “Christmas 1915” and thinking that it was factually incorrect, as the truce he spoke about in the song really happened in 1914. He tells me he used 1915 because it sounded 'softer' in the context of the song. I started with the book. I wanted to tell some stories from the ordinary men who served in an extraordinary situation. The book is not a volume of The Great War but anecdotes about some of the guys who served. I wanted to tell readers a little about the places I have visited -- Gallipolli, The Somme, Ypres … and I wanted to tell them also about how much the music of the time influenced the guys in the trenches. Music can be so personal and private these days, with mp3s and iPods … . Back then, songs had to be sung out to be heard, and they were very public . The show came just after the book, and it is an attempt to put this historical information into a format easily accessible to the 'man in the street.' It's something along the lines of what [actor] Aidan Dooley has done for Tom Crean in [his one-man show] “Antarctic Explorer.”

TheWildGeese.com:  Did the Irish in the trenches of France and the Dardanelles sing the same songs as their English confreres, or did they manage to find some uniquely Irish twists to the music on offer?

MacQuaile:  Mostly they sang 'Popular' music. This amounted to songs that were both English and, indeed, American. They parodied the words for these songs, “It's a Long Way to Tipperary” became “That’s the Wrong Way to Tickle Mary,” and “If You Were the Only Girl in the World” became “If You Were the Only [German] Bosch in the Trench.” In some instances, there were actual Irish melodies, such as the very famous “Mountains of Mourne, “which became “Old Gallipolli's A Wonderful Place.” I have recorded some of these trench songs, and they are available as downloads from www.londubh.ie, [the website of the publisher of] my book.

TheWildGeese.com:  So they took popular songs, and reworded them? The English and Scots and Welsh, all the troops did this, or did the Irish do more of it? 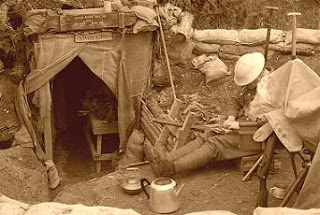 MacQuaile: Yes, pretty much, the Scots had some of their own songs, also. The famous singer Harry Lauder, who was too old to serve himself, beseeched the British army to allow him to travel and entertain the troops at the front line. After losing his own son, John, a captain, in France, he wrote “Keep Right On to the End of the Road.”

But the music and songs seemed to split into two groups. One being the existing songs well known and sung by the troops in the trenches, and the other being the more evocative songs or even the recruiting songs sung to the relatives who remained at home.

This was especially noticeable in the U.S., which had a few years of war going on before they entered, so the songs reflected the attitudes of the time, some for [the war], some against.

TheWildGeese.com:  What's your favorite moment in your show, in your portrayal of Larry Kelly, the most iconic moment, perhaps, typifying the Irish experience in The Great War?

MacQuaile: Undoubtedly, the Christmas truce, in the line near Messines there were many Irish present and when they emerged from the trenches into ‘No Man’s Land’ to 'chat' with the Germans and bury their dead. Of course, I have likened it to being put out of class into the corridor at school when you were a kid. Standing there and seeing a familiar place, but in a very strange situation. You notice things that maybe pass you by on a regular basis, but, of course, there is always the feeling of foreboding in the back of your mind!

TheWildGeese.com:  What did you portray Larry doing in this scene?

MacQuaile: Having a fag [cigarette]! Talking to a German about the German’s girlfriend in London and his 3-1/2 horsepower motorbike, which he had to leave behind. ...  Irreplaceable! - WG