"Shane O’Neill – 'The Grand Disturber' of Elizabethan Ireland" is Brian Mallon’s first novel and it is nothing less than stunning. The book is anchored in many years historical research and the subsequent moulding of this history into narrative is astounding. It speaks volumes of Mr. Mallon’s passion for Ireland and his commitment to share this very important story.

The central character ‘Shane the Proud’ was named so for his ambitious fight in the 16th century against English rule in northern Ireland. Three books have been written about Shane which have been found lacking in truth. Brian’s portrayal of Shane as a learned Irish chieftain with serious political savvy is for certain a significantly more accurate rendition. 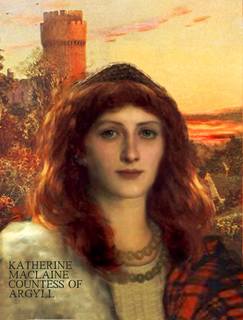 Shane O’Neill rose to power in the north of Ireland with a feisty Scottish countess by his side. The correlation between meeting Lady Katherine (pictured) and Shane’s most ambitious campaign has at last been revealed in this book. Brian has written Katherine as she should be -- a feisty, street-smart, book-smart Scottish lass. The inclusion of this love story provides glimmers of the Celtic heart -- passionate and lusty. Shanes and Katherine’s first kiss outside the great hall by torchlight is sexy as hell.

The chapters move between London, Dublin and the North of Ireland, as "The O’Neill" stages one of the last rebellions in Irish history. There is an ebb and flow in the book as it moves between slow quiet tension, humorous scenes, dramatic escapes, and military tussles. Mallon’s ability to use the Irish turn of phrase and parlance in dialogue is marvelous with the voices of the people faithfully rendered with nuanced style and flair. In particular, the dialogue starring Queen Elizabeth I is grand. The courtly speech with its rhetorical twists and turns is fascinating and scintillating. The movements of the main characters around the landscape of northern Ireland describe a land of turbulence, of rugged magnificence and quiet magic. This land, the book highlights, was not yet mapped in detail at this time. It’s a fascinating look into the military organisation of the Irish and their skilful use of the land in attack and defence. If you don’t have an in-depth knowledge of Irish landscape and history, it's worth having a map and Google to track this incredible adventure.

The politics within Ireland itself are intriguing. The complex clan system and cohabitation of Irish pagan spirituality and Brehon law with the Roman Catholic institution is skillfully woven into the fabric of the narrative. The story starts with Farleigh, the Bard Druid, in his underground ‘lair.’ Farleigh is a narrator who provides Druidic wisdom, humour and historical insight. He straddles the world between the story and the reader. His poetry, peppered throughout, speaks directly to the audience.

The spirituality and beliefs of the Irish are presented as complex and rooted in ancient culture. Shane's reverence to the ‘old ways’ is obvious in his respect for Farleigh’s druidic wisdom and his adherence to the rites and rituals of becoming “The O’Neill.” The involvement of the Roman Catholic Church is by no means missed and not romanticised. The hold of the Church in Rome over Ireland is exposed as it would have been. In the book, we see Rome afar from the shores of Ireland with a tenuous hold over the rebel Irish. The Jesuit order plays an intriguing role in the political machinations which would eventually bring the O’Neill clan to their knees.

Mallon has captured the mixture of paganism and Christianity present in both England and Ireland and it’s an intriguing commixture. There is a beguiling guest appearance by Queen Elizabeth’s advisor the astrologer, mathematician, astronomer and occult philosopher John Dee. When the druid Farliegh meets Mr. Dee it becomes apparent that the Irish magic is rooted firmly in the ground and in the surrender to the fates, but the Englishman’s method is focused on intellectual pursuit and forcing fate. Dee’s involvement with Queen Elizabeth is something worth researching further.

The book reads like an amplified theatre script and reveals Mallon’s experience in theatre, particularly in how he brings the scenes to life. Indeed, the book was first written as a script. The inauguration of Shane O’Neill is a beautifully romantic scene described in great detail. It’s an epic scene to rival any feature film or HBO series. Shane’s journey begins as he stands before thousands and pledges allegiance to the goddess trinity and finishes in heartbreaking fashion. What Brian doesn’t write in Shane's demise advances the scene in slow motion. Nothing is heard from Shane’s lips. It’s stark, brutal and shocking.

"Shane O’Neill – 'The Grand Disturber' of Elizabethan Ireland" is set in one of the most tension-filled political times in Ireland as the nation neared full conquest by the British crown. It exposes the forces behind this conquest honestly and conscientiously and invites you to reconsider the sovereignty of the Irish people. Gritty and honest, it is an exciting and real look into this time in Ireland and essential reading for people who love Irish history and culture. The O’Neills are a huge clan, with the original O’Neill said to be among the most prolific alpha males in history, creating a ridiculous amount of descendants. For those of us descended from this powerful clan, and there are many, it is without a doubt a must read.