Read Along with Mr. Malachy McCourt Well, if you are wondering what “Light of the Diddicoy” reads like, here is a master storyteller to relate it to you. Mr. Malachy McCourt reads from Chapter 12 called “The Runner.” Below is the actual text, if you would like to read along:

Loaded with moon-faced Italians, Sackett, Degraw and Union Streets in Red Hook are dangerous places for a kid like me to wander among. So I don’t complain about not being sent to Red Hook as I avoid all Italians at any cost since they eat their own babies, Vincent Maher tells me, and if you cross them they’ll chop up your mother ten years later (because they have the memory of elephants) and make meatballs out of her and serve her up with pasta and red sauce down in Bay Ridge because, “they’re all a bunch o’ pagan Catholics, fookin’ animals,” Vincent says. 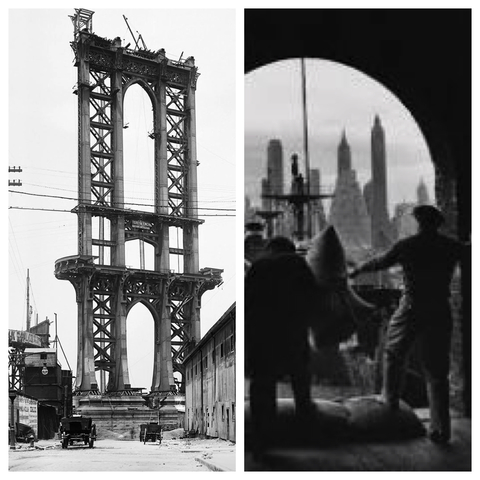 (Right: Manhattan Bridge under construction over Brooklyn’s “Irishtown” where the White Hand Gang had its headquarters.)

In the Navy Yard, men build ships paid for by the government contracts and this is wartime, so business is good. England is buying and as far as the manufacturers in Brooklyn are concerned, there should always be wars. All day and night long steam hammers slam down on hot iron slabs in the Navy Yard foundries. And you can hear the pound of them all the way over at 25 Bridge Street (the White Hand Gang’s saloon and headquarters), even making ripples in Ragtime Howard’s whiskey glass. When I yell up to Red Donnelly to ask if he needs any messages sent, he just waves his hat in the air revealing his red hair and fat head atop a barge where he directs cranes and bellows at his boyos.

The floating piers and pier houses at the terminals under the bridges like Jay Street and Fulton Street have industrial freight tracks dug into the Belgian brick that runs along the waterfront. Cargo is hauled from ships to floating piers to railcars that amble in

their clicking and their clacking through the neighborhood and pull up at warehousing units where the train cars butt against the platforms and where men with suit and tie and hats of all sort unload them by hand or by bale hook in the morning sun. It is there, under the bridges, that Cinders Connolly always shakes my hand and speaks to me like a man, smiling humbly as he is known to and with a mean set of crooked teeth and scabbing knuckles.

The terminals at Atlantic and Baltic take in shipments that mostly go onto automobile trucks to be driven over the bridges to Manhattan or east toward Queens or Long Island and wherever else, as it’s New York’s piers and the piers only that all goods are shipped since it is well before roads connect the cities to the farms and also before planes are to fill the skies. And everyone knows that it’s New York that is the center of the industrial world, now surpassing even old London town with the completion of the Erie Canal years ago.

At Baltic Street, Gibney “The Lark” speaks with me in a serious tone and I never seem to realize that it’s all a front as Big Dick Morrissey comes behind me and picks me up. Spinning me upside down, he dumps me in a garbage can so everyone can have a laugh. But when he’s not looking, I punch him in the stomach as hard as I can, though I’m never able to knock the wind from him.

It interests me greatly though, Red Hook, and so I ask around about it. In fact, asking questions becomes what I am known for and it is more than once I am told to “shaddup.” But because I have the hunger for knowing things, I never take it the wrong way. Beat McGarry tells me it’s the incumbent Irish that have run Red Hook for many years, but is now overflowing with immigrant Italians. Frankie Yale knows the value of the area and so he often sends in Il Maschio to remind the pier house supers and the stevedoring managers that it’s only a matter of time until the Italian Black Hand takes over.

“Who is Il Maschio?” I ask, but nobody knows. No one. If he’s a man or a group of men, no one can answer me since it, or they, slink in the shadows and when the clean-shaven Irish show up he, or they, vanish like they never existed, or he never existed. Maybe like they exist everywhere, or he does maybe.

(Right: A Brooklyn Bridge worker peers through the darkness.)

“What’s the Black Hand and what does Frankie Yale have to do with black hands and Il Maschio” I ask Cinders Connolly, but he won’t say.

“What does Il Maschio mean in Italian?” No one’s sure, but Dago Tom tells me it means “the mail.”

Somewhere I learn that Il Maschio is Frankie Yale’s wing of Italian thugs, or thug, who work on the docks and believe in something called “the SicilIan Code” and that if they can’t reach your mother, they’ll kidnap your child for ransom. And if you talk to the police or anyone else, the child will end up in a barrel at the bottom of the Gowanus Canal. And I learn too that Il Maschio only appears when the Irish fight amongst themselves, which happens often or when the dock boss is sent to Sing Sing or the workhouse, which also happens often. And since I can’t get straight answers about Italians, and I’m filled with strange stories I sense that there is mystery around their ways, even if they are Catholics like us. They are a mysterious people and since they show up only when we are fighting among ourselves, I sense that they must be in cahoots with the pookas from the stories of my childhood. But then, I am starting to get to the age where the validity of the old stories become questionable and that only confuses me more.

I think of my father and his quips, and though he was speaking of the British being preoccupied with the German, he used to say, “With your enemy’s turmoil come opportunities,” and so it is in Brooklyn with the Italians. Before being sent up to Sing Sing, McGowen had long been charged with controlling Red Hook for Dinny Meehan (White Hand Gang leader). But a couple months after McGowen was sent up, Dinny came under great pressure to take the area by force as it had been coming under the influence of Il Maschio in McGowen’s absence, since that’s when the Whitehanders are most vulnerable.

Originally posted at artofneed, Blog for the Auld Irishtown trilogy.

Outstanding, Eamon.  Thanks for sharing the video here.  Less than two months from the official release date of the book, now.  You must be getting antsy! (in a good way)