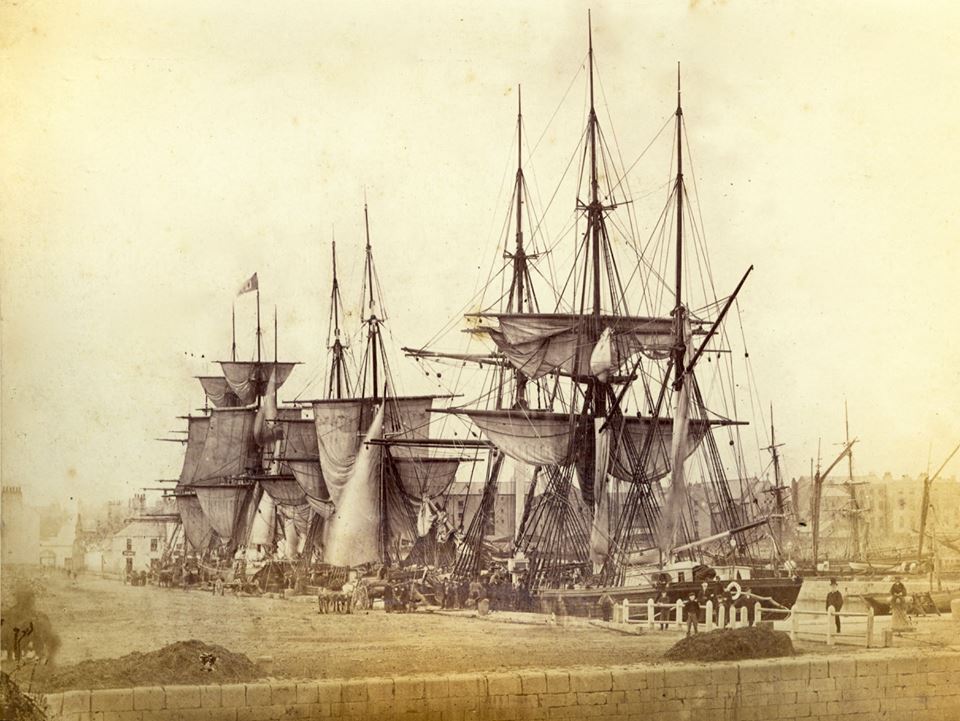 In June of 2013, Chetham's LIbrary in Manchester, England published an album, containing about 120 excellent prints of coastal scenes of rural Galway. Many of them were dated to 1879.  Founded in 1653, Chetham’s Library in Long Millgate, Manchester, is the oldest public library in the English-speaking world.

Chetham’s post caught the attention of Dr Jackie Ui Chionna from the National University of Ireland in Galway (NUIG), who has lately completed a PhD on the Galway Fishery. She proposed that the photographs probably came from the Ashworths, a Quaker cotton milling family from Egerton, near Bolton, who bought the Galway Fishery from the Encumbered Estates' Court in 1852 for £50,000.

The Ashworths subsequently converted it into the world's first commercial salmon fishery, building the Fishery Watchtower and the Tower Station, and pioneering the science now known as aquaculture.

Here I've shared just two of the photos -- one showing residents of The Claddagh, and the other showing ships docked in the Galway harbour.  You can view the entire album HERE. I've looked through these pictures and they're quite amazing. Thanks for posting!

One that really struck me was the photo of the Archbishop of Tuam... such oppulence in his garb considering the times...stark contrast to the Connemara families photographed

but it is this photo which really grabs and holds my attention is this one:

Bit Devine's comment, "One that really struck me was the photo of the Archbishop of Tuam... such oppulence in his garb considering the times...stark contrast to the Connemara families photographed" deserves a comment. Bit, where do you see opulence in that photo of the bishop? His vestments were and are required. Other than that? Methinks your anti-Catholicism is showing.

From a photographer's eye...and nothing more...there is a stark contrast between the vestments and surroundings of the Archbishop and that of the Connemara family... to be sure, all are in their best....

As to the archbishop pictured, John MacHale, he was the first prelate since the Reformation to have been solely educated in Ireland. He was fluent in Irish, Latin, French, English and Greek. He said mass in Irish and greeted his parishioners in Irish, young or old, rich or poor. He condemned teh Poor Law and the National Schools, starting his own schools instead.

Sorry but priest-bashing is a contact sport and televised in America today. I bristle because I know so many very good priests. I think one of the last bishops of Tuam (Galway) had an American girlfriend and a child. So not all priests are angels. Again I'm sorry for reading that wrong.

See you on retreat!

Wow love the photos of Galway city before cars. What I noticed was how grand the houses of the rich were compared to the living conditions of the poor at the time. Also I got shivers looking at the nuns. I guess that is the power a photo has.

Bernie, a chara, to this day, whether out in public or in a church setting, I am immediately reduced to a twelve-year old child whenever I see a nun or priest. "Yes, Sister. No Sister" "Yes Father. No Father"...

So I quite understand where you are coming from

Yeah regression at the sight of  black cloth is tough. I was not allowed to attend art class at school because of the nun and now I teach art in the very same building. So life is full of twists and turns. Saying that I know not all clergy are the same but unfortunately I am not a believer anymore of the church but it is a great source of comfort for many people which can only be a good thing.

The recent history of leaders of the main churches leaves a very bad taste in the mouth. While SOME are good' in my opinion the vast majority are hypocrites and for centuries have been living of the labour of the gullible, Voltaire said "Men made rich by your sweat and misery have made you superstitious - not to make you fear God but,to make you fear them" I think that sums up the situation.