Help With Bid to Honor Mayo-Born Marine Via Navy Ship

Our Goal: A US Navy Ship To Be Named For Cpl. Patrick 'Bob' Gallagher USMC, NC

We write to tell you about our most recent achievements with regards to having the U.S. Navy name a ship in honor of Cpl. Patrick "Bob" Gallagher! It has been a busy month indeed. 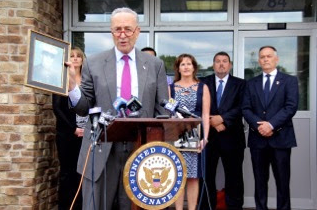 We received very warm support from the Senator Schumer's staff in preparing the information for the senator, who has made the recognition of immigrants' contributions to the growth and protection of America over our relatively short history a key feature of his efforts on behalf of his constiuency in the amazing state of New York. Senator Schumer has championed earlier efforts to address the ability of immigrants to earn citizenship through their service in the U.S. armed forces.

We would appreciate your effort this month to write to your representatives in Congress, your Senator, your state representatives, sharing Patrick's story and ask that they in turn write letters to the Navy Secretary's office endorsing our objective and requesting that the secretary recognize Patrick's gallantry and courage on behalf of his adopted country by naming the next destroyer-class ship in his honor. We have included links to the endorsement letters on the updated website -- perhaps they'll inspire you as you find the words to ask for your representatives' help.

Thank you again. We know that this projects lives because of your interest and support! We have a ways to go, but we are certainly closer today to seeing the USS Patrick Gallagher sail someday! Sign the petition to get a ship named for his hero.

Here's is more on Patrick Gallagher's history in Vietnam:

Over 250 men have been awarded the Medal of Honor who list as their place of birth “Ireland”.  Though uniforms, weapons and enemies have changed, their love and devotion to their adopted country that motivated them to deeds of the highest bravery in her defense have remained constant.   There should, in this writer’s opinion be one more name on that list, Lance Corporal Patrick Gallagher, USMC.

Patrick Gallagher was born in Derrintogher, County Mayo, Ireland on February 2, 1944. At the age of eighteen, as so many you Irish men and women before him, Patrick immigrated to the United States and the promise of a new life filled with opportunity. He quickly started on the immigrant dream: studying law while working in real estate; even getting involved in local politics as a campaign worker for Senator Robert Kennedy.  In 1966, Patrick was drafted for service in Vietnam. Despite pleas from a heart sick sister living in the states to avoid the horrors of war by simply returning to Ireland. Patrick would not be swayed, he already had a cousin serving with the Marines in Nam and Patrick  was committed to his new home in America. Read the rest of his story here:

Sign the petition to get a ship named for his hero.