Professor, with an eye on the 18th century, gets coveted full-time post at NYU's Irish Studies 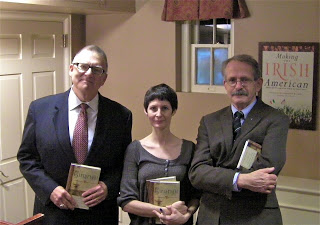 (First published 11/1/10) We enjoyed A. Roger Ekirch’s presentation at NYU’s Glucksman Ireland House on Thursday October 28th, focused on James Annesley, born in County Wexford, whose litigated claim to the title Earl of Anglesea spawned five novels, including most famously, the epic “Kidnapped,” by Robert Louis Stevenson. Ekirch, a professor of history at Virginia Tech, proved to be both folksy and expert as he highlighted Annesley’s dramatic, and troubled, life. Ekirch’s latest book, focused on Annesley, is “Birthright: The True Story That Inspired ‘Kidnapped,” published in February by Norton.

Before the presentation, Ireland House Associate Director Eileen Reilly announced that Thomas Truxes, who introduced Ekirch to the 25 in attendance, had just received a full-time appointment to NYU’s Irish Studies Program and History Department by the school's College of Arts and Science. With the contract (nontenured) appointment, Truxes becomes a regular faculty member instead of a recurring adjunct. He is currently teaching an undergraduate course, “The Irish in America (1580-1850),” and the first half of the two-part history sequence in Ireland House’s MA program (a degree in Irish and Irish-American Studies), along with a graduate seminar called “History of Modern Ireland I,” covering Elizabethan Ireland to the Act of Union. Next semester, Truxes is slated to teach an undergraduate course, “Ireland in the Age of Revolution, 1750-1803.”

Thomas M. Truxes (below), a professor at NYU Irish Studies, focuses on trans-Atlantic trade in the 18th century. 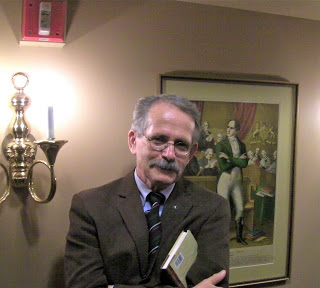 Truxes and his wife lived in an apartment in Trinity College Dublin’s Trinity Hall in 1976, while he was researching for his Ph.D. We enjoyed reminiscing with him about our time at TCD, in 1974, when a good hamburger was as rare as a tenured position today. Truxes, who early in his career earned an MBA, seems a dogged and passionate researcher, as well as passionaate writer and teacher. One of his research interests is the history of trade between Ireland and the American colonies in the era before the American Revolution. His most recent book is titled “Defying Empire: Trading with the Enemy in Colonial New York,” published by Yale University Press in 2008.

Check out Truxes’ most engaging website, which includes weekly postings, including his latest, an article culled from a 1717 newspaper, headlined, “Mermaid Endangers Mediterranean Shipping.” WG

* Stranger than fiction: the true story behind Kidnapped, The Guardian, Feb. 18, 2010
* Trinity Hall, University of Dublin, Trinity College from Wikipedia