The following perspectives from Sixteen Films partner and producer Rebecca O'Brien (above) are drawn largely from the studio's Production Notes for the studio's latest film, the biopic "Jimmy's Hall," directed by her longtime collaborator Ken Loach ("The Wind That Shakes the Barley" and "Hidden Agenda," among their Irish-themed films). "Jimmy's Hall," with a screenplay by Paul Laverty, another longtime colleague, was shot in County Leitrim, where activist Jimmy Gralton, the film's protagonist, grew up. The notes, assembled for the producers by Benji Wilson, were presented to the entertainment industry trade and news media. We are delighted to share these perspectives with our readership, in cooperation with Sixteen Films and Sony Pictures Classics.

Exploring the Ireland of my ancestors

I was born in London and grew up in Peebles, which is near Edinburgh in Scotland.  My Irish heritage stems from my father’s side – his father Barney (my grandfather) was brought up in Dromoland Castle in County Clare, the O’Brien family seat.  He moved to Scotland in the 1920s and married the daughter of the Earl of Haddington, living in grand houses in East Lothian and Berwickshire. He was a clever man and worked with Marconi when he was inventing the radio amongst other things. I’ve always been fascinated by my Irish heritage and the O’Brien family, which is huge because its history goes back to Brian Boru in the 10th century.  My background obviously made me fascinated by Irish history and the opportunity I’ve had working on the Ken Loach films has afforded me an incredible possibility to explore the country of my ancestors and its political and social history.

At first I thought that Jimmy’s Hall would be a nice, easy film to make. We had no idea that it would expand into the biggest film we’ve done. That’s in terms of budget, production values, as well as cast and crew. We had a dance team, two different bands that we concocted ourselves, and, of course, we built a bloody hall in the middle of nowhere. I remember doing the budget and then thinking, ‘Oh gosh, this is quite a big film.’

Fortunately our wonderful French supporters, Why Not and Wild Bunch said, ‘Let’s do it again in the same way as we did Looking for Eric, The Angel’s Share, Route Irish…’ So, they came on board very happily in the same arrangement that we had before, whereby they cashflowed the production up-front, trusting us to get on with the work while the legal process was still in train. 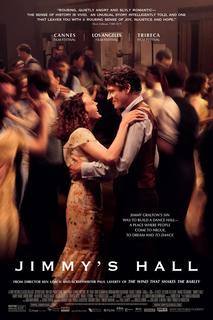 Because it was a bigger budget this time, we thought we would probably need more money from other funders. So we approached the BFI, Film 4 and the Irish Film Board (because obviously it is a very Irish film, and needed Irish support), and all of them said yes. As usual, it was more complex wrangling three public funders --­ you’ve got three more sets of lawyers and financiers, and what one does the others want to do, as well, so you end up with a lot of paperwork, but there was never a conflict. The financing was pretty straightforward because of the French funding.

We could not have made this film without their support from the very beginning because we had a huge prep period. We needed to be able to be in Leitrim, we needed to have location managers working early on to find the right sites, and we started casting in January and location recce-ing in the winter. (EDITOR'S NOTE: Recce-ing refers to a pre-filming visit to a location to work out its suitability for shooting. per Wikipedia) We also had to train our actors in dancing, and we were teaching people in Leitrim and Sligo dancing for at least a couple of months before the shoot began. So, we had to think ahead of the game and that’s obviously a bigger production number.

Our partners always leave us to make the film we want to make. I think it’s partly to do with the fact that we are experienced. They know what they’re getting; they have seen us deliver films within the budget and on-time before. They feel safe enough that we don’t have a completion bond for instance and they know how fiercely independent we are. Ken likes to work in the way that he does, without interference, and they’ve understood that over the years that actually it is best to leave him to it -­‐ they get a better film that way. Of course, it’s generous of them to let us get on with it and it’s quite brave of them, too. That culture has got a lot worse in recent years. There is a lot of executive involvement in projects, but with us they know that we don’t appreciate it very much. We would much rather show them what we can do later. We chose in this case to film in quite an inaccessible place, yet it was always a real bonus that we were able to make it in Leitrim. The real Jimmy Gralton grew up in south Leitrim and though we filmed in north Leitrim, it was still amazing to be able to do it in the right county. It was purely the coincidence of the locations being right -­‐  we would have filmed in Mayo if the locations were better there. But we needed places with as few modern bungalows as possible and we needed a town big enough to support us nearby, which was Sligo.

Sligo isn’t the most accessible place, but once we were there we were extraordinarily lucky – it rains for 50% of the time in this area yet we didn’t lose anything because of the weather, not one day. To choose a place which is so wet, because it’s so close to the Atlantic, is almost completely bonkers but the weather smiled on us. When you’re building a hall on a bog, it helps if it’s not raining.

A lot of the cast were local, as well, so it’s actually been more of a community film than I ever imagined we could make. That has meant that the local people have been able to own the film in the way that you always want a film to belong to the area. That, in turn, makes it all the better because it’s their film as well as our film. And I’d like to think it practises what it preaches, because everybody had a great time making it.

A companion piece, not a sequel This film is a depiction of life 10 years down the line from The Wind that Shakes the Barley and I think it’s a bit more optimistic in a way. Historically, it’s a companion piece: it takes the same arguments and looks at how they evolved -­‐ the Irish Free State had been around for 10 years by this time, and it’s interesting to see where the power lines now lie. We consistently fail to learn from history. It’s really important to revisit, see where we went right and where we went wrong. Making a film like this gives you that opportunity to see what lessons we need to learn.

This is Ken’s last big film, I think we can safely say that. There were a few teary people around on the shoot, but I feel quite positive. For a start, I don’t believe it’s Ken’s last work because I’m sure he’ll pop up with a documentary or something small. And I like the idea of having gone full circle with him. I started working with him on Hidden Agenda and the team that we’ve managed to put together can’t last forever so it’s nice to end it on a high. Or not even end it but to feel, ‘Okay, here’s a body of work.’ One of my next jobs will be to sew all that together and find a way of using modern techniques to present that body of work and put the films in historical context. If you look at Ken’s films, they form a social history of the last 50 years. That should be preserved as well as it can and be made accessible.

Oh my , aren't you the lucky one. Having a job that you obviously love; getting to visit your ancestral home ; beats working as a Social Worker any day !! To cap it all you were working with Ken Loach; how amazing is that. Have not seen Jimmy's Hall yet ; but I do intend to see it . Nice article