I received my package from Bernardos Children's home on Thursday so I had time over the Easter Weekend to comb through the information and insert it all into my family tree. I couldn't pull my self out of his story until I had at least a timeline of events leading up to his 1899 marriage in Quebec where he stated he was 'late of Dublin'.  I had been working on two clues to his history for 12 years, his middle name of Garrett which he always used and all his Canadian records stating he was Irish.

Charles Garrett Hayes was christened by the Methodist Rev Charles Garrett at the Pitt St. Chapel & Mission in 1877 Liverpool in Lancashire England.  Turns out Rev. Garrett was a  notable figure who was known for his work for the poor families of Liverpool.  The Hayes family must have had a close relationship with this enigmatic man which set the scene for what I was to discover.  I had answered that first nagging question in my head and continued to dig hoping to find his Irish ancestry.

When Charles was 3 his father, a foreman at the Hutchinson Parr Street flour mill, died suddenly.  In 1887, at 9, his uncle  placed him in a charitable school and his 17 year old sister was sent to the Hamilton Distribution Home in Canada as part of the Dr. Stephensons Home Children group.  The next year their mother died so she must have been ill.  I have ordered a death certificate, hoping it is her to find out what happened.

During the entire year of 1892, at the age of 14, one of Charles 4 brothers removed him from school putting him to work for a woman selling fish on Duke st, then 'pulling up' roads for the tramways and all of a sudden he was admitted to the Liverpool Sheltering Home.  Three weeks after that he was shipped to Quebec and admitted to the Knowlton Distribution Home and placed in 2 newspaper shops finally ending up on a farm in the predominantly Irish community of Morin Flats Quebec.  Aha I thought now I am on to something!

In 1894 he was working on the farm of a Methodist Irishman named John Seale who reported that Charles goes to school and church, is improving and doing well.  Three Seale brothers from Connaugh Ireland settled in this area in 1850, their old homestead is now a B&B in this now tourist community.  I do not know if Charles stayed in the house but he lived on this beautiful farm surrounded by Irish families. 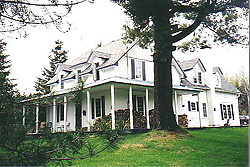 His last known position in 1895 before being 'released' at 18 was working for Allan Hammond another Irishman from one of the orignal Irish settlers of Morin Flats, now called Morin Heights.  The Hammond homestead is also now a B&B and I wonder if he was allowed to stay in this home.

He lived amongst the poor Irish in Liverpool and was then 'farmed out' to Canada by the British Home Children scheme but did he come to appreciate and respect the Irish more then his own heritage?  Did he learn how to speak with an Irish accent and when did he make his choice to pass himself off as from Ireland, here in Morin flats or 4 years later when he married into a recently immigrated English family from Warwickshire? I do not have any details of his life during his years with these Irish families but it seems to me preferring to be Irish than an orphan from Liverpool shows another emotional connection that he held onto along with the man Charles Garrett.  His life did not get any easier but I came down through his DNA and I have been determined to uncover his story and I am hoping he doesn't mind that I did.

You may find, the further you dig, that his assertion of being "late of Dublin" isn't too far off..genealogically speaking... a lot of the Liverpool Irish moved back and forth across the Irish sea just as easily as we might cross the street. Today, almost two-thirds of Liverpuddlians can trace their roots back to Ireland.

Though Liverpool born, he might have had a better chance of finding a way out by asserting his "irishness"

Conversely, my Gran's grandparents emigrated from So Armagh to Scotland. They assimilated into the Scottish culture and hid their "irishness" so that they might avail of better jobs. They too went back and forth as a matter of routine. My gran's father moved the whole family back to So Armagh after being "allowed to desert" the British Army in order to tend to the family farm

That is what I had initially figured but I got up to both sets of grandparents this weekend and working on a single Hayes mother and her parents so have touched into late 1700's now...no Irish  on any lines so far.

I remember reading once that each child sent to the Distribution Homes in Canada and Australia were made to sit for a formal portrait. Have you had any luck locating one for your GGrandfather?

Lots of luck with your research !

UPDATE:  Bernardos apologized in their letter as there was no photo of Charles stating the LSH did not keep the best records.  The hand written documentation all came, from what I can tell, from their 'observer' Mr. D. who went to all the locations and reported back.

I had sent an email to the Morin Heights (changed from flats for tourism) historical society to let them know my findings and that maybe this was a BHC story that had a happy conclusion in that his 4 years with the Irish farmers left a very strong impression on him.  They wrote back how happy they were to hear that and would attempt to contact those families if any were still in the area.

I also received the death certificate of Charles mother who died of Bronchitis.  I had lunch with my mother yesterday and if you could have seen her face when I said again...that if I have the right Hayes grandparents for Charles then I have dipped into the 1700's and was still in Liverpool with no indication of Irish lineage.  She said "I am still going to say I'm Irish!"  She had been told by her father that the Hayes' were from Dublin and proudly wore her 'Kiss me I'm Irish' button every St. Patrick's day.  She used to tint her platinum hair green too, she was a lounge singer and dancer her whole life.  I did try to explain to her that even tho 3 of her 4 grandparents were born to generations of English ancestors, her grandmother was a 5th generation Nova Scotian Irish descendant with all her lines stemming mostly from Ireland's Martin, Connors, O'Neil, McGuire, Hackett, McDonald, Johnson, Doyle and Scallions.  She could still not hide her disappointment and it brought to mind that 'Who do you think you are' UK episode where the actor John Hurt was not only disappointed but downright 'gutted' to discover that he did not have Irish ancestry. http://www.youtube.com/watch?v=2f91ZxtkGR4

Again this emotional connection with Ireland stems beyond DNA I believe and I have a blogpost bubbling up as we speak.

I think it is the way of things...there is a calling in your blood...in the very marrow. As a child, I grew up with my Gran swearing we were Scot not Irish. Indeed, she was born on Skye in Scotland and her dad was postmaster there. Her siblings were all born in and around Glasgow. Yet teh language the spoke at home and that she and her cousins spoke around this wee girl was Irish not Scot's Gaelic. I would look at her photos of her family and they screamed "We are Irish!" at least on her father's side of things. I woudl point out the irishness of her father's side and get smacked with a spoon as she said "Never say we are Irish!"

It wasn't until I turned 18 that she pulled me aside and told me the back story. How her father's father and mum had emighrated to Scotland during An Gorta Mor. How, back then, you either assimilated into the culture and shunned your own roots or you went hungry and without work. "Never say we are Irish!" & "Only speak the familiar tongue ta home" were ingrained in her and she, in turn, passed that along to her children and grandchildren

Very revealing Bit.  I figured the reason we have no actual Irish locations for all those families that came to Canada in the 1700's, before the great famine, is because they came to help found the British fort of 'Halifax'.They quickly moved out along the coast lining it with Irish fishing villages during 'penal times' and had their secret catholic ceremonies while staying low key.  They grabbed the free land and rations for a year and high tailed it over always thought they were very clever.

The Irish have always known that to survive is to thrive, I believe. They continued to pass along their heritage, their customs, their rituals. If wrapping their earth bound rituals in the cloak of christianity would allow them breathing room to raise the next generation, so be it. If learning the Anglo tongue would lend them and upper hand, so be it.

There is an immense Celtic culture in and around Halifax, Cape Berton. I always say that it is like stepping into a way back machine

One of these years, I will make it back up for the Celtic Colours. I had so much fun there in 2000. I could have easily stayed put and never come back to Arizona