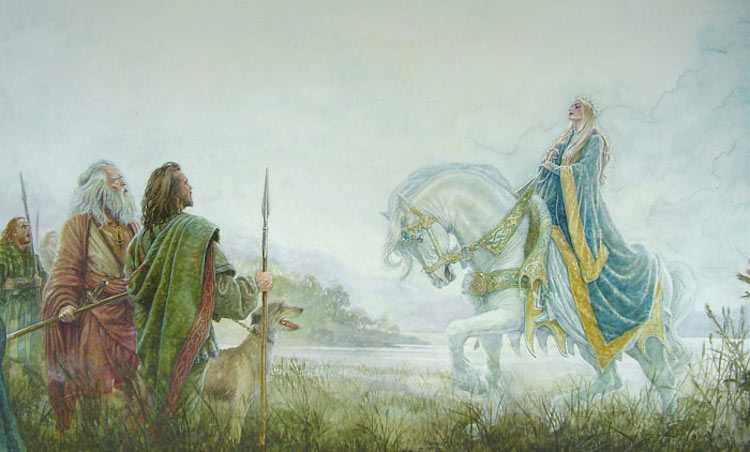 I don’t know what to make of this story, a great adventure of pre-Christian Ireland. There are many variants to this tale, but here are the basics: Oisín (oh-SHEEN) is one of the brave band of warriors known as the Fianna. One day, while hunting, Oisín and the Fianna encounter a beautiful young lady on a magnificent white horse. This lady, Niamh (NEE-if), says that she has come to Ireland to find the great warrior Oisín and bring him to her homeland, Tir Na nOg, the land of eternal youth over the waters to the west.

Oisín immediately falls in love with Niamh and travels with her to Tir Na nOg, where every year is like a hundred years on earth. Three Tir Na nOg years later, Oisín is homesick and decides to visit Ireland. Niamh agrees to let him ride the white horse back to his home, but warns him that if his feet were to touch the ground, he would become an old man. Oisín goes to Ireland, where 300 years have passed, and is saddened to learn that his family is gone and the Fianna have vanished. 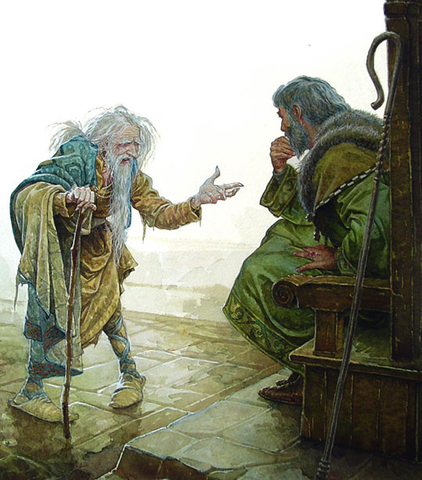 Oisín then comes across some men attempting to move a great stone. Attempting to assist, he leans over to help push aside the rock, the saddle breaks, he hits the ground and instantly is transformed into an old man. The horse returns to Tir Na nOg without its rider, Niamh’s lover.

Is this a reverse Adam and Eve story, with Oisín's Eve tempting him not with the allure of transient joy, but with an eternity of bliss in a Garden of Eden beyond the sea - or maybe more precisely a Fountain of Youth?  Three hundred years of bliss - not bad in the Love Game. But what about Oisín's itch to return home? Let’s concede the passion of his love for the golden-haired Naimh, but also allow the passion he feels for his warrior youth. And don’t forget: Oisín didn’t jump off the horse; he fell. Dollars to donuts, if Oisín doesn’t fall, he returns to Tir Na nOg. That’s my take.

Maybe we can also see Oisín as a fellow Wild Goose, like many of us emigrating to those lands beyond the mist of Ireland’s western shores. We learn from history that the Irish came to 19th century North America in great numbers, pined for the "Auld Sod" in song and verse (and continue to do so), but returned to Ireland only to visit.  Only 5 percent of those Irish immigrants would return to Ireland for good, compared with about half of Italians, who also came to our shores seeking a new life, then went back to Italy to live. As a friend of my father used to tell him, “The Irish are always talking about Home Rule, but never home to enjoy it.”  Ultimately, though Ireland tugs at our very being, for many of us exiles, “our love is in America.”

Sheridan was correct: “Ireland is the land of happy wars and sad love songs.” The story of Oisín and Niamh is one of tragic love and longing, any way it plays out in your mind.

Really enjoyable piece, Jim.  Thanks for your work here!

Thanks, Ryan. And thanks to P.J. Lynch for the great artwork accompanying this piece. If I'm not mistaken, the second piece of art shows Oisin with St. Patrick, a variant of the legend. In this, Oisin tells St. Patrick of the great deeds of the Fianna, this providing a link between the Celtic past and Christianity.

Wonderful artwork.  Who among us doesn't understand Oisin's need to return to Eire?

I've heard the story before, but really enjoyed your take on it, Jim.  Thanks!

Thanks, Kelly. And you made Galway proud with your Limerick.

May I share a bit of a tale written by my father's hand in January 1997.  He writes of our heritage and the roots of our name.  It begins, the name Hession came from the ancient Gaelic.  The Americanized versions are Heshion, Hussion and Hushion.  The clan dates back before Irish recorded history and born of the original Irish tribes before the invasion of the Germanic, Norsemen and Celts.  They were most probably related to the Tibes of Picts.

Cumhail a Fianna Chief was the father of Finn mac Cumhail (also known as Finn Mc Coul or McCool) the legendary Irish hero and leader of the Fianna. Tales of Finn and Fianna were widely documented in the 3rd century A.D. during what is now refered to as the Fennian cycle.

Now to Oisin, (where the Hession Clans name is derived from), who was a poet and the son of Sadb a woodland goddess sometimes referred to as the daughter of Ba Dearg, the setting sun and the god of the dead. Now it is said that Finn McCoul had captured Sadb and fathered Oisin.

Tis true Oisin fell in love with Niamh Cinn OIr and went with her to Tir N nOg and returned to find 300 years had passed.  It is said in some sources he then met with St Patrick and had many discussions as a sort of last defense of paganism in the face of Christianity. Either way, Finn McCoul, Oisin and the band of Fianna is one of Irelands most famous legends.

Be it true or not, I love the story and I love the history of the family name.  I know the name as Galway roots as Hugh OhOisin was the first arch bishop of Tuam. And know our family took part in the Desmond Rebellion in Tipperary in the late 15th century.

And yes, Ireland tugs at my heart and each time I return I feel like I've just come home.  I love America too, but when I die I wish to have my ashes return to the Irish soil.

Interesting ... thanks for that run-down, Judith.

In 2012 I spent 3 months in Glenosheen (the townland my great Grandmother, Minnie Nagle, emigrated to Australia from in 1885) as Artist in residence for Ballyhoura Fáilte back in 2012. All day I would sit at my desk in a stone cottage at the foot of Sli Finn mountain and look out over the Glen of Oisin, Glenosheen, where the meeting between Oisin and Niamh happened & where, also, Oisin touched ground.

Surely it is story, like that of Odysseus, of embracing one's own mortality. No matter how wonderous Tir na nOgor Medea or ..., embracing home, family clay, mortality that's where man becomes a man.That's why Oisin had to return. And, in his meeting with St Patrick – the townland of Ardpatrick is on  the south west border of the Glen – pagan Ireland passed its dreaming on to (and through) Catholic Irleland.

Kerry, I was thinking of Odysseus as well when I wrote about Oisin and Niamh. Traditionally going West (sun setting) has been associated with moving toward death. When Oisin goes west, he moves toward eternal youth. Maybe he was fated to return to Ireland, fall and grow old, just as Odysseus was fated to return to Penelope and Adam to give in to temptation in the Garden. How else to explain the human condition?

How else indeed. These stories tell us that mortality is better than eternal youth so we'd better bloody well grow up sometime. And of course Jim, romantics like us seem to have a great deal of difficulty doing that.