Nellie Bly: Circling the World and Changing It - Part One "I have never written a word that did not come from my heart. I never shall." -- Nellie Bly - The Evening-Journal (8 January 1922)

The world of media today, be it print, radio, television or online, includes a very large percentage of female reporters, but it was not always so. One of the very first women to become a famous and well respected member of the news media in the United States was an Irish-American named Elizabeth Jane Cochran. She was born on May 5, 1864 in Cochran's Mills, Pennsylvania. The town had been named for her father, Judge Michael Cochran, whose father, Robert, had immigrated to the US from Ireland. Little is known of the exact ancestry of her mother, Mary Jane, but her maiden name was Kennedy.

Though few today remember Elizabeth, whom the family nicknamed “Pink” after her favorite color of clothing, if you had lived around the late 19th or early 20th century you would have known her very well, under name of Nellie Bly. Her father had extensive land and business holdings in the town. He also eventually had fifteen children, ten by his first wife and five more by Elizabeth’s mother after his first wife died. So when he passed away without a will when Elizabeth was just six years old, his now grown children from his first marriage all wanted a piece of the estate. Spread out among so many, there was very little left for Mary Jane and her family.

Pink did one year of a two year teacher course at Indian State Normal School, but they ran out of money for year number two. Mary Jane and her children moved to Pittsburgh in 1880 and took in boarders there. Pink was helping her mother with the boarders and searching unsuccessfully for work around the city for several years. She seemed to have few prospects other than finding a good husband. Elizabeth had grown into thin and attractive young women and no doubt might have found a husband who could have made her financially secure without too much effort, but there is no indication she ever pursued that at the time.

In 1885 she read a number of editorials in “The Pittsburgh Dispatch” by the "Quiet Observer," pen name of Erasmus Wilson, in which he expounded on the subject of women staying home and leaving work to males. After her long, fruitless, search for employment, this enraged Elizabeth so much that it pushed her into an action that would change her life and also gain her a life-long friend and mentor in, ironically, the author of those editorials. 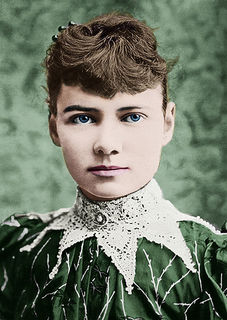 She wrote a feisty rebuttal to the paper and signed it “Little Orphan Girl.” The editor, George Madden, was impressed, though not so much by her writing skill as by her “spirit.” They got her into the office and offered her a job, at $5 a week. She discovered Wilson, though clearly not enlightened on women's issues, was a “great big good-natured fellow” and they became life-long friends. As was the custom then, she was assigned a “pen name.” Madden named her after the Stephen Foster song “Nelly Bly,” but changed the spelling to Nellie. Thus Elizabeth Jane "Pink" Cochran became, and would ever remain, "Nellie Bly."

While she was not highly educated, nor a skilled writer yet, and perhaps never was in the classical sense, she did have that honesty and passion Madden had recognized in her letter. When she interviewed people she seemed to have an ability to get people to open up to her. Nellie got her readers to care about her, and thus often about people and places she wrote about. Good editing smoothed out the rough edges.

Most of the few woman reporters of the day, and only 2% of working journalists in 1880 were women, were usually limited to things like social reporting and fashion. At first Madden allowed Nellie to deviate from that and do real reporting about the trials and tribulations of working women. One of her first significant assignments was something she would become famous for, going “undercover,” this time as a factory worker and reporting on what she found. Then it was called “stunt reporting,” now we’d call it undercover investigative reporting. She was still quite naïve and did not dig deeply into many abuses at these factories, but she did bring attention to the lives of the women working there. She also wrote about the disadvantages women faced in divorce cases, something with which she had an unfortunate first-hand experience, thanks her mother’s divorce from the man she married after Nellie’s father died. Nellie was becoming a heroine to working women of Pittsburgh along the way, but as is often the case, that made her enemies as well, and those enemies included people who helped support the paper with advertising. Pressure was brought to bear on the paper to rein in the energetic young working class hero. In late 1885 she suddenly found herself relegated to the “women’s pages.” Perhaps the papers publishers thought such a young woman with little financial security would submit to this. If so, they underestimated her, as many people would in her life. She’d had a taste of success as a serious reporter, and she had no intention of being a mere social secretary for any paper. She quit, but with a deal to contribute as a free-lancer and with a plan.

Her plan was to travel to Mexico and send back reports on that exotic (in the 1880s) location. The genesis of this plan was conversations she had with a visiting Mexican group in Pittsburgh. People at the paper tried to talk her out of it. Women simply didn’t do this sort of thing at the time, but the dauntless Nellie was not easy to scare.

Nellie's only compromise was to take her mother along. She stayed in Mexico for six months. Her first reports were light-hearted pieces about the people and culture, but that soon changed. Though she continued to express admiration for the Mexican people, as she learned more about the corrupt regime of President Díaz, her dispatches became increasingly critical of it. When the Díaz got wind of that, she was “invited” to leave the country. She would publish her reports in a book titled “Six Months in Mexico” in 1889. In spite of the success of her Mexican reports, which were picked up by other papers around the country, on her return to Pittsburgh she was put on women’s and arts stories again. She hadn’t been afraid to depart for Mexico, and she formed another fearless plan now. In March 1887, less than three months after returning, she disappeared from Pittsburgh. She would soon reappear in New York.

(Right: An illustration from "Six Months in Mexico.)

If Nellie, who would never be accused of being self-effacing, thought the capital of the journalistic world would bow down to her in New York because of her Mexican adventure, she was mistaken. Finally, after several months of rejection, with her money nearly gone, she bluffed her way into the offices of the "New York World" and got a job offer from publisher Joseph Pulitzer. However, she had to agree to feign insanity to get herself committed to the in asylum on Blackwell’s Island, then write of the experience later. It was certainly a rough first assignment, but she never lacked nerve or confidence in her own ability. And no doubt being close to broke added incentive.

Thus it was that in September 1887, “Nellie Brown” checked into Irene Stenard’s Temporary Home for Women and began to exhibit bizarre behavior. The next morning the police transported Nellie to Bellevue Hospital, and into history.

Before leaving for New York, Nellie had left her friend Erasmus Wilson a note: "Dear Q.O., I am off to New York. Look out for me - BLY” It would most certainly not turn out to be an empty boast.

Read part 2 of "Circling the World and Changing It." Book: Ten Days in a Madhouse

Book: Around the World in Seventy-Two Days

Movie: “Ten Days in a Madhouse”

Could Bisland have beaten Nellie Bly 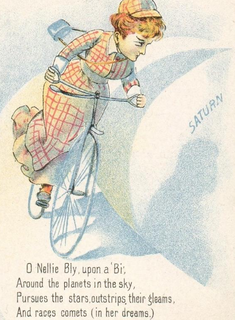 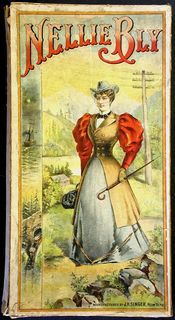 Well done Nellie . Thank you Joe for this wonderful story

You're welcome, Mary. She certainly had "moxie" as they used to say back then. She was one of those people who didn't care how many people said, "you can't," she said "I can" and then she went out and did it.

I guess we all like to think that we woudl not bow to the pressure of 'the norm' ... but she actually did not bow to any pressure ..