Michael Collins: A Young Captain in the 1916 Easter Rising Michael Collins was the youngest son of a farmer, born in the west of the County of  Cork, Ireland, in 1890. The Collins were relatively prosperous, as poor farmers go: his father held 90 acres, which his grandfather had in turn also cultivated. Some say that the farm (known as "Woodfield") had been held by them for seven generations. His family had a long background of staunch republican sympathies, and connections stretching back to the Fenian movement, to Wolfe Tone and to the 1798 Rebellion. His maternal grandmother was born a McCarthy: a clan of great prominence in the ancient annals of Ireland. She had vivid memories of the Great Famine of the 1840s.  Arthur Griffith's pioneering periodical, The United Irishman, was received at home; and always perused with great interest by young Michael, who was an avid reader.

His family was also well-educated. Both his parents had mastered more than two languages, such as French, in addition to Irish and English. They were familiar with Greek and Latin. His father, who got his learning at a "hedge-school", when teaching Irish Catholics was still outlawed, was very keen on mathematics.  Although his mother Mary Anne (who was much younger) did attend school, much of their study was pursued independently at home.

Their children attended the National Schools which the later 19th century saw widely established.  As a child, Michael's patriotism attracted the notice of his elders. A teacher at school reported the boy's vivid interest in "anything pertaining to the welfare of his country." In a dramatic deathbed statement, his father admonished the family to "Mind that boy: he will do great things for Ireland."

While still quite young, Michael won a local wrestling championship; and often challenged wrestlers older and larger than himself, as a pastime. In his teens, he distinguished himself as a contributing sports writer for a local newspaper operated by a brother-in-law. In 1906, shortly before his sixteenth birthday, he took a job as a clerk in London, where an elder sister was already established.

Michael assuaged a keen homesickness for Ireland, by way of enthusiastic participation in clubs and sports of London's Irish community. In the Gaelic Athletics League there, he began to take a leadership role among his young peers, playing for the local Geraldines Hurling Club and acting as their secretary. For the civil service examination, he took night classes at King's College in accountancy, taxation, commercial law and economics.  He pursued a successful career in banking there for nine years.  Yet found that "a glass ceiling" for the Irish frustrated his hopes for advancement.

Continuing to write, he presented papers at political societies which supported Irish independence. He became known as "a Wolfe Tone republican" in his outlook. In 1909, sponsored by the famous athlete Sam McGuire, he joined the Irish Republican Brotherhood (IRB), a clandestine body organizing the struggle for independence. By 1914 he was secretary to the London and Southeastern district. In April 1914, along with his cousin and close friend Sean Hurley, he enlisted with the London Brigade of the Irish Volunteers. When the Easter Rebellion of 1916 was in its planning stages, he and a number of his boyhood friends from home all volunteered together.  During the Easter Rising, he served as staff Captain and aide-de-camp to Joseph Plunkett, at the Rising's headquarters in the General Post Office building (the "GPO".) There he and his comrades underwent a crucible of fire. Hundreds of vastly outnumbered and out-gunned republicans held out against thousands of British troops, under brutal artillery bombardment, for a week. There, and in the Rising's aftermath, he saw many of his mentors and closest friends lose their lives.

Following the Rising he was imprisoned with over a thousand others. The execution of the Rising's leaders thrust young men like himself to the fore. As he boarded the boat with his fellow prisoners, he was already discussing plans for "next time." While still interned at the prison camp, he was instrumental in re-organizing the survivors: first in a campaign of non-cooperation with prison authorities.  Later planning the underground campaign, which would lead ultimately to Britain's capitulation in 1921.

Elected in 1918 to represent Cork, he was a member of the First Dail in 1919: Ireland's first independent legislature.  During the War of Independence, in the rebel government-on-the-run, he also acted as Minister for Finance and Director of Intelligence.

Having played a major role in shepherding Ireland through the tumultuous and controversial events of the Truce and Treaty negotiations, and formed the first Provisional Government of the Free State, he was tragically killed in an ambush at  the opening of the Civil War.  Ireland was deprived of a young leader of great promise. 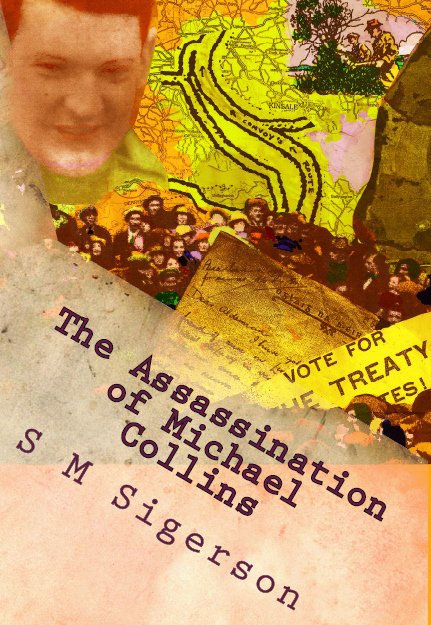 S M Sigerson is the author of "The Assassination of Michael Collins: What Happened At Béal na mBláth?" www.amazon.com/dp/1493784714; This article is excerpted from the book.