Mary Harris Jones: One Tough 'Mother' - Part 1 of 3: The Genesis of a Radical 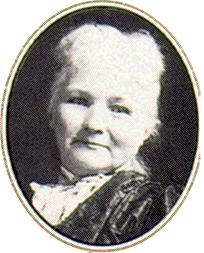 Mary Harris "Mother" Jones was not your typical senior-citizen. At age 100, already well-established as one of the greatest labor leaders in American history, she was still giving tycoons heart-burn, still earning the title as "the most dangerous woman in America" given her by a West Virginia prosecutor.

Jones was born near Cork City, in Ireland, on May 1, 1830, on what would become May Day, the annual commemoration of labor's struggle for fair wages and decent conditions. It was a struggle she would come to epitomize.

(Left: The kindly face of "the most dangerous woman in America.")

This larger-than-life working class hero obviously had rebel blood coursing through her veins. During the 1830s, her grandfather was hanged for agitating against the local British landlords and the rack rents they charged, perpetuating a virtual serfdom among Ireland's tenant farmers.

In 1835, Jones' father, Richard, was forced to flee Ireland when he was accused of agitating against Ireland's British colonial government. Her father made his way to the United States and about 1841 he saved up the money for their passage and sent for his family. Jones spent her childhood in Toronto, where her father had found work on the railroad.

Jones trained to be a teacher in Toronto, but Toronto public schools did not allow the hiring of Catholic teachers. The diminutive girl left for the United States, no doubt filing this away as another example of the abuses the powerful heap on the weak. Jones moved around the United States for a while, teaching and also working as a seamstress, until, in 1860, she met and married George Jones, an iron worker, and settled down in Memphis, Tennessee.

With her husband, Jones received her first exposure to organized labor. The industrial revolution had created a system rife with abuse. Large factory and mine owners were exploiting cheap labor to amass incredible, one might be tempted to say, obscene fortunes. Workers were often forced to work 12-hour days, seven days a week, with none of the benefits workers take for granted today. Often, workers were little more than disposable parts of the mines and factories. In addition, abuses of child labor were appalling.

Her husband began helping to organize a branch of the Iron Molders Union. No doubt she and George discussed his organizing activities often, for it was a perilous activity in the second half of the 19th century. The tycoons and captains of industry saw labor unions as something sinister and distinctly threatening. They set themselves to exterminate the threat, any way they could.

By 1867, however, George and his friends had been successful. Local 66 of the Iron Molders Union became chartered in Memphis. Mary and her husband had also had four children by then. Jones surely must have thought she would live out her days as a wife and mother in Memphis. But tragedy was just looming on the horizon for the Jones family.

That summer, Yellow Fever struck Memphis. Within seven days, Jones watched her husband and all four of her children die. At the age of 37, she was utterly alone in the world, and one would be hard pressed to imagine how stunned she must have been. A lesser person might have lain down and simply died with them or at the very least have been forever broken in mind and spirit. But this diminutive woman possessed a mind and spirit that few have ever equaled.

"Pray for the dead, and fight like hell for the living," she would say one day. In Memphis she lived those words, even when the dead were her own family. The first thing she did after burying all of them was to help care for the thousands in the city still suffering from the disease. She later noted that when Yellow fever struck the cities of the South, as it often did during summers during the 19th century, the rich would abandon the city for healthier climes; it was the poor who were forced to stay, and die. This, too, she filed away in her life experience.

With little but the clothes on her back, Jones then made her way to Chicago, where she found work as a seamstress for the wealthy. She would later write of sitting in the window of some of their fancy homes, watching shivering jobless, homeless people passing by.

Seeing their wretched poverty, the disparity in living conditions of America's "royalty" and workers horrified her. Jones had also started a dress shop in the city and had hopes of making a success of it, allowing her to stop working in the homes of the wealthy. But misfortune visited her again. In 1871, the Great Chicago Fire destroyed much of the city, including her small dress shop.

The tale of the life of Mary Harris Jones to this point is unquestionably a depressing one: driven from Ireland by the British oppression, driven from Canada by religious prejudice, a happy family destroyed by disease and finally her hope for a decent independent living destroyed by fire.

Yet Jones did not dwell on the setbacks, however, for during this time in Chicago, as she worked for the wealthy, she had found her calling. She had now had her fill of watching the "haves" get more and more, while the "have-nots" got less and less.

Jones was ready to put her personal life aside. It wasn't long before the "haves" would all know the name Mary Harris "Mother" Jones.

Part 2: "Wherever There Is a Fight"