Without question, among the Irish immigrant women of New Orleans, Margaret Haughery’s name is the most famous. Her story tells of a widowed, penniless young woman, a laundress, a peddler, a dairymaid, a baker, and, finally, a highly successful entrepreneur and philanthropist of extraordinary generosity. That Margaret Haughery’s first business was started with small savings from working as a laundress, and that her second business succeeded because of her business savvy to turn around a near bankrupt bakery is all the more impressive considering the fact that she was illiterate.  When she died in 1882 her pallbearers included the current and previous governors of Louisiana, the mayor of New Orleans and the Archbishop, who read the prayers after Mass.   At her death she left $13,000 ($306,000 in 2013 dollars) to six orphan asylums and two asylums for widows or mothers with dependent children.  She also paid off the debt owed by St. Elizabeth’s House of Industry and left the rest, $30,000, ($705,000 in 2013) to the Sisters of Charity with instructions that it be used to maintain St. Vincent’s Infant Asylum. When the rental income and clearance of debt are considered, the total amount bequeathed exceeded $50,000, nearly $1,200,000 by 2013 standards.

Margaret Gaffney was born in Tully, Carrigellan, Co. Leitrim.  In 2008 residents of this area formed the non-profit organization, Margaret of New Orleans Birthplace. They raised the funds to have a cottage of that era rebuilt and are active in promoting the good works she accomplished in her lifetime. More can be learned by visiting their website -- www.MargaretsBirthplace.com

Margaret Haughery arrived in New Orleans in 1835 with her newlywed husband and gave birth to a daughter shortly thereafter.  Unfortunately, within the year, both husband and daughter died. Finding herself a widow in a new city with few resources, she supported herself by working as a laundress for the St. Charles Hotel. Not surprisingly, given the grief that she must have felt over the loss of her child, she also became actively involved in the orphanage asylum run by the Sisters of Charity. The Catholic Church figured prominently in Margaret Haughery’s life, just as it did in the lives of so many other Irish immigrant women, and she gave whatever she could spare to the Church. Aside from her own survival, the main purpose of her employment was helping the orphans under the care of the Sisters of Charity.  She collected clothing and furniture and begged for food and cash donations from nearby businesses and restaurants.   For her efforts, the Sisters of Charity gave her a room in the orphanage free of charge. Not having to pay rent allowed Haughery to save enough money to purchase two dairy cows.  Originally she just wanted the orphans always to have fresh milk to drink. However, her cows were blessed with Irish luck, and Margret soon began to sell the surplus to neighbors, and her business thrived. She invested in a simple milk cart, and within just 2 years, Haughery expanded her business to forty cows and enlarged her product range to include cream and butter. She kept her business simple and expenses low by managing the milk cart herself.  She also utilized every opportunity to pursue her goal of aiding orphans. While unloading her milk cart, she solicited goods and donations for the children, filling her cart as she emptied it of its cargo of milk.  Like other Irish immigrant women, she managed her earnings well. She invested part of it, often times giving low interest loans to other businesses, as well as put some of it back into her dairy business.  The bulk of her income, however, she divided between the orphanages and other Catholic-related charitable activities.

Having no family of her own, the children and nuns at the orphanage became her family. She worked closely with Sister Regis, head matron of the Sisters of Charity and the New Orleans Female Orphan Asylum.  She credited Sister Regis with helping her through her double bereavement, declaring that “she was all to me when death claimed my husband and child.”   For the remainder of her life, Haughery donated the majority of her earnings to the work of the Sisters of Charity.  This included helping to establish and fund three orphan asylums as well as help to pay for the building of St. Theresa of Avila Church. Over the years, Haughery had made numerous loans to the D’Aquin Bakery, located near the waterfront on New Levee Street, now called South Peters Street.  As collateral for the loans, Haughery was given stock in the bakery, and in 1859 she found herself the majority owner of a nearly bankrupt business.  Haughery quit the dairy business and took over the failing bakery. Although without previous experience in this line of business, Haughery managed to save the bakery from bankruptcy and turn it into a very successful enterprise.  She expanded both product line and clientele. She sold bread, cakes, crackers, cookies, flour, and even macaroni. Moreover, she convinced many shipping merchants to allow her to supply the bread for their vessels, and as a result, her reputation began to spread across the United States. Obviously not just business-savvy, she invented a method of packaging crackers that made it possible to ship them “fresh” to other cities.  When Margaret’s bakery began to package crackers, she shipped them on those vessels that she already supplied with her bread products. Moreover, during this entire time she never neglected the orphanages she had helped to create and sold them bread at cost.  She also gave away free bread to any who claimed to be in need.

As with the dairy business, Haughery personally supervised the operation of the bakery. As her business grew, she investigated and invested in the latest improvements and thus became the first bakery in the South to operate machinery by steam. This efficient operation allowed her to expand even more, until she had built the largest bakery in the United States.  She oversaw all aspects of her business, employing forty men whose occupations ran from clerk to errand boy, but she refused to employ department heads.  Rhoda E. White during her visit to New Orleans went to Margaret’s bakery and was astounded by the number of carts coming and going while ”men were carrying into the building barrels of flour, while others were coming out of the warehouse with large baskets, and barrels and boxes of flour, bread and crackers.”   Her flour depot was capable of manufacturing 800 barrels of flour for sale per day in addition to what she needed to make her own bread products.  She followed the simple business model of offering a good product for a reasonable price and, as her demand grew, rather than increasing the price, she simply expanded the production.

Margaret Haughery’s life represents segments of experiences common to most Irish immigrants. Illiterate and orphaned at an early age, made a widow and childless by the age of twenty-three in a new city, she was without contacts.  Yet she did not falter under these tragedies but rather through hard work, perseverance, intelligence, and a strong religious faith she turned her life into a success. Haughery viewed her work in terms of what good she could accomplish with the money she earned. Lacking a family of her own, she adopted those children who also were bereft of kin. Seeking succor from her religious faith, she returned it by implementing and supporting Catholic projects to help the needy.  In many of these respects she differed little from other Irish immigrant women who traveled to America and settled here.  In comparison with them her success, her ambition, and her goals represented a difference in degree but not in kind. 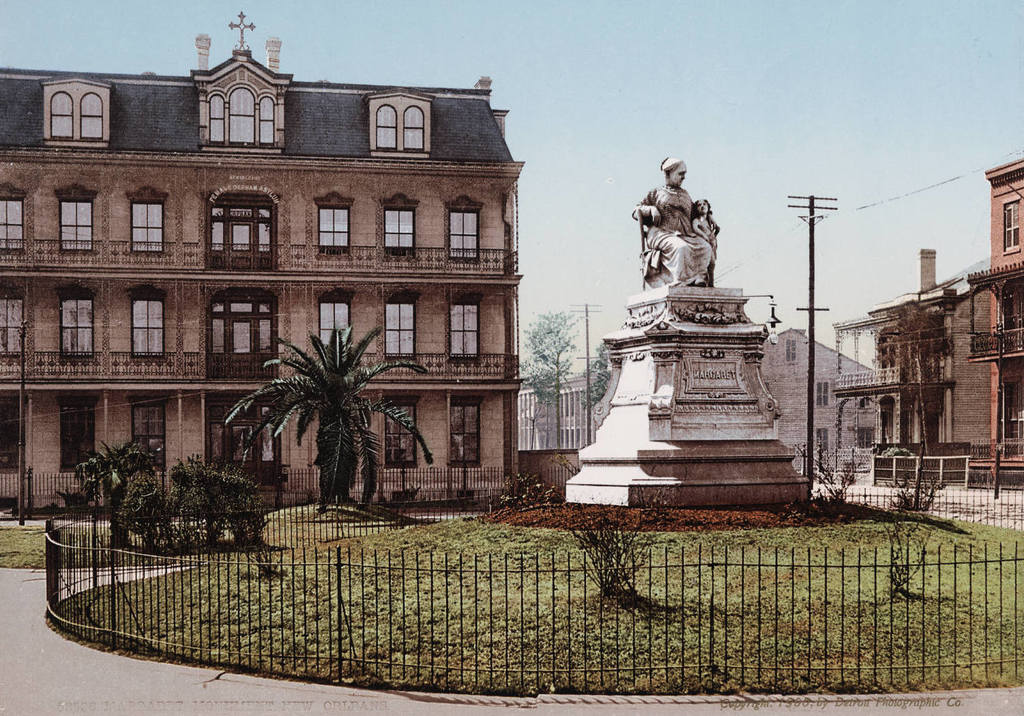 The first public monument erected for a women in the United States. This statue of Margaret stands in a small park near St. Theresa of Avila Church and the former orphanage to which she devoted so much of her time, energy and resources.