In August 1649 the New Model Army, led by Oliver Cromwell, went to Ireland to re-occupy the country following the Irish Rebellion of 1641. This Cromwellian conquest was largely complete by 1652. This army was raised and supported by money advanced by private individuals, subscribed on the security of 2,500,000 acres of Irish land to be confiscated at the close of the rebellion. This approach had been provided for by the 1642 Adventurers Act of the Long Parliament, which said that the Parliament's creditors could reclaim their debts by receiving confiscated land in Ireland.

The Act for the Settlement of Ireland 1652 provided for the confiscation and re-distribution of the lands of the defeated Irish, mostly Confederate Catholics, who had opposed Cromwell and supported the royalists. Parliamentarian soldiers who served in Ireland were entitled to an allotment of confiscated land there, in lieu of their wages, which the Parliament was unable to pay in full. Lands were also to be provided to a third group, settlers from England and America. The dispossessed landholders were to be transported to Connaught and to other countries.

In 1655 and 1656, the Down Survey -- a cadastral survey of Ireland -- was carried out by English scientist and surgeon-general of the English army, William Petty.  The survey was apparently called the "Down Survey" by Petty because the results were set down in maps; 'admeasurement down' was used; it is referred to by that name in Petty's will.  Specifically, it refers to the chains that were literally "put down" on the ground to measure every inch of Ireland from the smallest parish to the biggest of the 32 counties.

The result was not only an incredibly detailed view of Ireland of the time but also provided a set of beautiful maps that have historic and artistic significance. The 1670 parish maps, which he described as "amazingly accurate", have now been digitised and loaded on to modern-day Google maps to give a complete picture of who owned what.

With the aid of 'Books of Survey and Distribution,' the result is that people all over Ireland will be able to research the ownership of lands in townlands going back to that time.

People will be able to look at the parishes whence their ancestors came and see where they were living in the 17th Century.

The survey sought to measure all the land to be forfeited by the Catholic Irish in order to facilitate its redistribution to Merchant Adventurers and English soldiers. Copies of these maps have survived in dozens of libraries and archives throughout Ireland and Britain, as well as in the National Library of France.

This Project has brought together for the first time in over 300 years all the surviving maps, digitised them and made them available as a public online resource.  Trinity College in Dublin has compiled the maps onto one well designed website.

Have a look at the maps and let us know if you find anything interesting in relation to your ancestors.  If your ancestors emigrated from Ireland early on -- especially in the pre-famine era -- these maps may contain vital clues for your research. 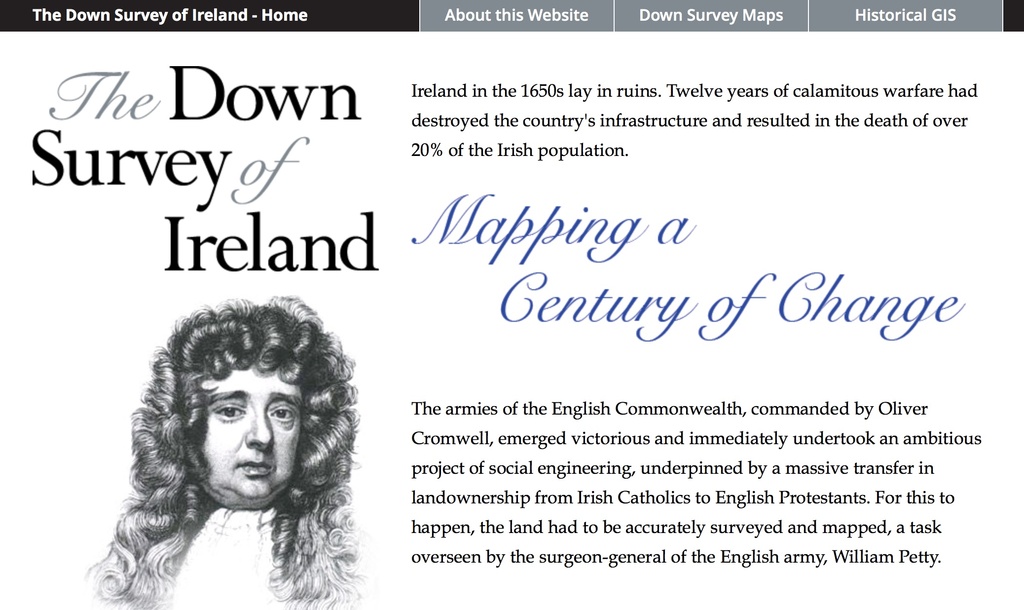