My Grandfather Tom left Westport, Mayo, and farm life in Aughagower, I assume around 1923.  As one of the "Lost Legion" of Irish republicans, disgruntled by the affairs of the state, he decided to emigrate. Accompanied by his best friend "Ton" Malone, he set out one evening from a dance armed with a few bottles of "black stuff," which he swapped for train tickets to Dublin.

At some point, days or weeks, later they landed at Holyhead, drifting towards London, sleeping rough in their only good suits.

The term "Long Distance Kiddies" was born here for the Irish men that walked 260 miles from Holyhead to London looking for any type of work. When London had no jobs for them, the men walked 180 miles on to Manchester, sleeping in ditches and helping on farms. When that didn’t turn up anything, they walked back to London to look for work.

Back in London, they finally got work digging the tube tunnels that cost many an Irish life. There are many tales of men squeezing into tunnel wall recesses when trains passed by during repair work. More often than not, one man would be left without an escape and be run over. All in a day’s work -- an Irish labourer's life was cheap.

The song "McAlpines Fusiliers" would have been born out of these times and experiences: "I've worked till the sweat, it  had me bet, with Russian, Czech and Poles, on shuddering jams up in the hydro dams, or underneath the Thames in a hole. . . ."

I have heard the term "Tunnel Tiger" used for these Irishmen, but I am not sure if this was a period nickname or it was coined later.

Tom settled down in London and started a family by 1939. With the outbreak of war, he brought his young family back to Westport to stay in relative safety. Very possibly living and working in the UK, he may have received a call-up for military service. This he dodged by using his brother's name and continued building work on his return to London. At some point, this came out and the military authorities were after him. Tom ended up in a British military prison. 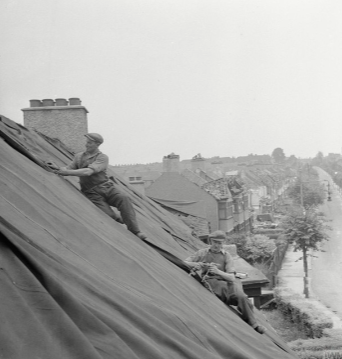 He can’t have been alone in this situation as an Irishman trying to make a living, but not wanting to fight for Britain.

Seen as unreliable to fight, he was placed into a construction unit with other Irishmen and put to work building anti-invasion installations and secret mustard gas depots around London. They also had to repair bomb damage throughout the rest of the war and recover bodies. Not quite sure what the legal standing these men had. Having been imprisoned was seen as a blemish on their hardworking lives. Having been forced to work for the British military was then the next thing nobody ever wanted to speak about after the war.

The term "Blitz Squad" has turned up in recent years for these bomb repair teams. I wonder if it was coined for these Irish builders specifically.

After the war, Tom settled in London with his family and continued his life in building work.

I'd be interested to read of anybody else’s family tales of “Long Distance Kiddies,” “Tunnel Tigers,” or “Blitz Squads,” just to get a broader picture of their life and times and to prevent their hardships from being forgotten.