Left, actor Liam Neeson tells the audience of several hundred, "I was going to say Madame Mayor, but then I thought maybe I shouldn't." WG Photos / Gerry Regan from live broadcast by NYC-TV

Master of Ceremonies Christine C. Quinn, the speaker of the City Council, particularly praised Neeson for his support of Manhattan’s Irish Arts Center, a beacon of Irish culture in the borough’s one-time gritty Hell’s Kitchen neighborhood for 41 years. The center will be moving into a new facility, she mentioned, and Neeson’s presence at fundraisers has been a huge help, a gesture, the self-deprecating Neeson called merely “the power of celebrity.” Neeson, 60, lives in Manhattan’s Upper West Side.

Perhaps typifying the appeal of the Ballymena, County Antrim-born actor, one of the most accomplished of his generation, was the remarks of fellow honoree James McGovern, deputy chief of the city’s Sanitation Department. McGovern was honored for his role in helping steer the department’s round-the-clock, 6-week effort to clear debris from Hurricane Sandy from the front of hard-hit homes in the Rockaways. In his remarks, at turns light-hearted and poignant, told the audience of several hundred that he told his sister he was to be honored at City Hall, and he urged her to come. She was, he said, unenthused. “Liam Neeson will be there,” he added. At that point, he noted, she worried if she’d have time to get her nails and her done in time. 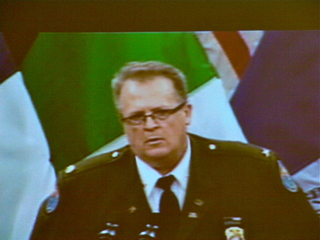 Award namesake Thomas Manton was born in 1932 of Irish immigrant parents. He was a Democratic Party leader in the city’s borough of Queens, and represented a constituency in Queens and the Bronx in the House of Representatives for seven terms. He served in the U.S. Marines and the NYPD before embarking on his political career.

Also honored were Siobhan Dennehy, executive director of the Emerald Isle Immigration Center, representing the efforts of the hundreds of volunteers who participated in the “Irish Day of Action” to help relieve beleaguered Rockaways residents, and Peter J.F. Meijer, from Team Rubicon, who helped organize the group’s hundreds of volunteer military veterans in support of Rockaways residents.

Providing entertainment were trad band Celtic Cross and several performances from the Broadway musical “Once,” which is set in Dublin and based on the Academy Award winning film. More than 80 people, unable to squeeze into the packed Council Chambers, watched the proceedings on a live video feed in a spare room in City Hall. WG

I have always had a great respect for Liam, both as an incredibly talented actor and a decent human being

I certainly have to agree, Bit. I have seen him at other events, and he is always accessible and congenial with attendees. Remarkable!

And he's going to be shooting a couple of scenes in our offices in mid-April. Everyone around here is looking forward to it.

John, I suspect your staff cherish the memory for years to come! What's the film project?

It's called A Walk Among the TOmbstones, and they're going to shoot at the pub next door, and apparently our space will be turned into an office in a police station.

Maybe I can sit in my office and sing while they're here and just wait to "be discovered?" With my luck, I'll be out of the office when they do the real shooting, and I'll just get to meet the crew.

Perhaps, but trust to Providence, John. They may actually find your lustrous voice a nice complement to their film. Such a quintessential New York backstory -- the priest who sings like an angel! Do you have an agent? Don't be shy -- after all, the Jesuits get a share of your royalties, I suspect. ;-)

Don't be silly - the money from the CD sales goes to the Xavier Society for the Blind. Anything else I get would go to the community. >>I don't even get a percentage. (But I have a lot of fun along the way.)

Well, I might keep some CDs handy to provide / sell to the crew, who undoubtedly will want to support the Society. Only God knows what blessed things might ensue. We are, when all is said and one, God's instruments, after all.