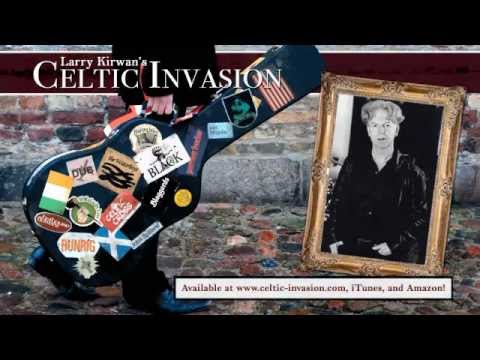 I have long been a fan of Larry Kirwan and his radio show, Celtic Crush. For those who might not have had a chance to listen, Celtic Crush features artists of the eight Celtic nations. Their musical background spans many genres and generations. Having all of that to work off, I was honored to be asked to review the newest Larry Kirwan CD compilation, “Celtic Invasion,” for The Wild Geese.

Knowing that his play lists run the gamut of what is Celtic, I was pleased to find a few of my favorites are his, as well, as Larry and I sometimes don't see eye to eye on what is Celtic. If I am to be honest, and I always am, two of the song selections, Pat McGuire's "You're So Beautiful" and The Waterboys' "Savage Earth Heart",  aren’t what I would call Celtic, rock or otherwise, other than the fact that the vocals are sung in a decided broad brogue. In fact, for some of them, I found myself drawing parallels to late ‘70s rock groups and early ‘80s hair bands. For those who don't know what an 80s hair band exactly is, think big hair and loud wailing guitars, Def Leppard, Bon Jovi or KISS. They were, though, all quite a bit of rollicking good craic.

The big boys were all there: Black 47, RunRig, The Waterboys, and John Spillane. Happily, so were Shilelagh Law, Peatbog Faeries and Garrahan’s Ghost. There was so much talent packed into one CD. If I could make any comparison, I would say, it was sort of like the Mad Hatter hosted a seisún, and this brilliant melting pot of talent all brought their best to the circle.

In listening to each song, I did take note that some ran quite long, the aforementioned "Savage Earth Heart" topping the list at 7:42 ran the longest. I found my mind drifting after about four minutes and had to refocus into the song. It brought to mind the advice given to me by the producer of a compilation album I was part of back in 2005. They said that any cut more than four minutes, whether spoken word or music, would lose the listener. He said that there were few songs that could get away with bending that “rule,” Don McLean’s signature song, “American Pie,” being one of them. "Sí Do Mhaimeo" by Hothouse Flowers was also on the long side at 6:36 but it didn't feel so very long.

In reviewing any album, I always pay heed to the ones that I find myself humming or singing snippets of hours after I have quit listening, the ones that have become an earworm that I cannot shake. Thanks to Larry Kirwan and his “Celtic Invasion,” I find myself now whistling bits of “Clash of the Ash” by RunRig, and “Sí Do Mhaimeo” by Hothouse Flowers. “Uncle Jim” by Kirwan’s own Black 47 always makes me smile at the clever phrasings. I enjoyed John Spillane’s take on “Buile Mo Chroí” (“The Beat of My Heart”). Spillane took the song to another plain, where Celtic, Blues and Rock melded into one gorgeously rounded note. BarleyJuice, Celtic Cross, The Blaggards and Shilelagh Law set my toes to tapping with their songs. The one that I find myself replaying is Sullivan’s Lake (“The Flood”) by Garrahan’s Ghost.

All in all, this is a brilliant gathering of talent, as one would expect from Larry Kirwan. I know that it will find a home in my traveling case. It will be the one I reach for when I need that extra boost of energetic “get me through the last hundred miles” music. It will be one that I add to the stockings of my mid-20s sons at Christmas. WG

EDITOR'S NOTE: Larry Kirwan's label, Valley Entertainment, is offering, for a limted time, to WG members only,  a 30% discount on "Celtic Invasion." Send an e-mail to jon@valley-entertainment.com to take advantage. To sample the compilation or to purchase it, visit Valley Entertainment's website. You can read more about Kirwan on WG.

You can buy "Celtic Invasion," HERE.