The following Q&A with County Clare-born actor Kirby Simone (Oonagh) in Sixteen Films' biopic "Jimmy's Hall") is part of the studio's Production Notes for the film, shot in the story's actual locales in County Leitrim. The notes, assembled for the produceers by Benji Wilson, were presented to the entertainment industry trade and news media. We are delighted to share these perspectives with our readership, in cooperation with Sixteen Films and Sony Pictures Classics.

I’m playing Oonagh, who is Jimmy’s love interest. In the ‘20s they were sort of a couple we think and then he leaves, comes back 10 years later and she’s married with kids -­‐ but they still have this very strong bond. She’s also on the board of trustees for the hall and she teaches dancing there.

How do you imagine her past?

In the ‘20s, when Jimmy leaves, he asks her to come with him, but she’s the only daughter, her mother is fading and her father would be lost without her… You can tell that she’s probably one of these women who’s been taking care of everybody and the house for a long time. She’s probably a very hard worker and has had a lot of duties and responsibilities from quite a young age, I think.

Is she based on a real-life figure?

Not in Jimmy’s story but I did say to his relatives that I was playing the love interest and we were thinking perhaps Jimmy might have had his eye on someone – someone who had their eye on him. (Below: Simone & Barry Ward)

How did you come to be cast? 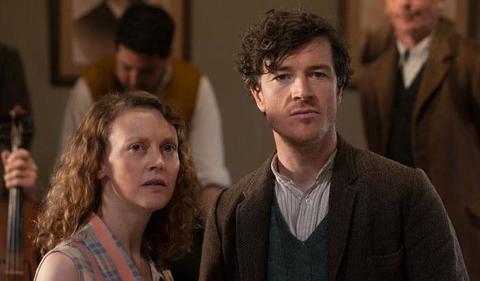 My agent in London sent me for a meeting with Ken, and we just had a five-minute chat. Then I was asked to come back a couple of weeks later to do some improvisations, then after that I did another round in London and then I came for two days to Dublin, so it was a long process. Even when I had been offered the part I didn’t know my character’s name. We knew it was built on Jimmy Gralton, so we were all looking online to see who this guy was. I had seen very little about his personal life, so I asked Rebecca [O’Brien]. Ken called me back just to say, “Okay, let me just explain a little bit who you are, it’s a fictional character, it’s not a biopic,” and that’s when I let go and went, “I have no idea, so I'm just not going to think about it anymore – I’ll just turn up and play whoever they want me to play.”

How did you find playing period?

I knew from quite early on in the auditions that it was set in the 1930s, and that’s around my grandmother’s times so that interests me. It’s lovely to do a costume thing. Much of your previous work has been in theatre. How has this differed?

What effect does not having read the full script have on your performance?

I find it really liberating actually -­‐ I’m not playing for something that I know is going to happen to her in the future. I can only play what I know now. It makes total sense to me: Just play what you know. Even though we try and do that anyway as actors, it’s a bit of a gift to genuinely not know what’s round the corner.

Have you filmed scenes that have gone in unexpected directions as a result?

Yes. The very, very first day I didn’t have any lines. The camera was quite far back and it was sort of hard to get a grasp on it -­‐ I’m used to being told where my mark is and things like that. I was feeling a little bit like I didn’t really know what to do with myself. Then Mikel Murfi started throwing in lines that were not in the script that he had been told to throw in and I got a bit of a shock. I laughed, completely out of character, and then I realised, ‘Okay this is the beast -­‐ I have to be on my game all the time with this.’ Any surprises after that I’ve been able to react to properly. I was reminded just to stay in character for them.

How have you found the singing and the dancing? When we were in London, Barry [Ward] and I were immediately sent off to learn how to dance together. We had three classes a week and then we went to a ballroom once. I love dancing so I revelled in it. Luckily I did some step dancing when I was younger, so I picked that up quite easily -­- she’s supposed to be a big dancer in the room so it would look terrible if I didn’t know step dancing. Then I just loved learning the Lindy Hop, though they’re not supposed to be experts at Lindy Hopping, they’re just supposed to be able to shake a leg. Actually, I was a bit sad once the big dance scenes were over because we were learning for ages and now we don’t have to do them anymore. The Rivoli ballroom is around the corner from where I live in London, so we’ve already said when we go back we are definitely going to go some night and do some more Lindy Hopping!

What is the Lindy Hop?

When you see old videos of them doing it in America, they are flinging each other around the place. It’s really athletic, actually. We are doing a much, much tamer version with basic spins and twirls. The thing is that, unlike step dancing, you’re pressed against each other a lot more, which is why it was controversial at the time.

How active is Oonagh in local politics?

Jimmy’s the one flying the flag, and some of the boys are much more active, but Jimmy and Oonagh are very like-minded politically. They’d had discussions with each other about politics. It’s not just that they fancy each other -­‐ they actually connect on that level. They’re socialists -­‐ it’s all about helping some of the underdogs, really, helping people who’ve been ousted, picking people up and making things more fair.

What is your background in theatre and film?

I’m from Ennis originally, I moved to Galway when I was 17 and I did youth theatre and then I trained properly a couple of years after that in Dublin. I lived in Dublin for another few years after that then I moved to London for work – I wanted to do more stuff like this really. The irony being now I have come back to Ireland for what’s been probably my biggest role.

Congratulations to you  Kirby Simone ;