'Jimmy's Hall' a Nod to 'Free Spirit of the People': A Review In 2006, British director, Ken Loach won the Cannes Film Festival’s prestigious Palme d’Or award with his portrayal of the 1919-23 Irish War of Independence and Civil War in “The Wind That Shakes the Barley”. There is a scene in that film where a wealthy landowner who is about to be shot by the IRA defiantly shouts to his executioners that if ever their kind takes control Ireland will become “A Priest infested backwater”. In his latest film, “Jimmy’s Hall”, which was selected to compete for the 2014 Palme d’Or, Loach looks at Ireland in the early 1930s and explores to what extent this prophecy had been realised.

Based on true events, “Jimmy’s Hall” tells the story of Irish socialist agitator, James Gralton, the dance hall he built in rural Co.Leitrim and why, in 1933, he became the only Irishman to have ever been deported from the country. As the film opens we see Gralton, charismatically played by Dublin-born stage actor, Barry Ward, returning home in March 1932 to run his parent’s farm after having lived in New York for a decade. Despite expressing his desire to be left alone in peace, Jimmy Gralton soon faces pressure from his friends and neighbours to restore and reopen the dilapidated Pearse-Connolly Hall which he and his comrades had built on his land in 1921. 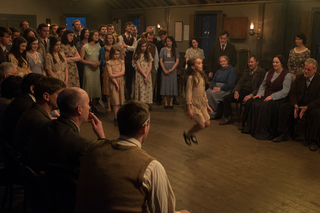 Through a series of flashbacks we see that the hall had served as a community centre, hosting lively dances, singing lessons, poetry recitals, art and language classes and political education. It had also been the venue for Republican courts and Gralton’s Direct Action Committee which attempted to resolve issues of local land ownership. It was inevitable that such class politics would cause Jimmy to run foul of a powerful coalition of counter-revolutionary, conservative elements within the community, including pro-Treaty IRA members, rich landowners, businessmen, and the Catholic Church. Denounced from the pulpit as an “anti-Christ”, and fearing for his life following threats from Free State gunmen, Jimmy flees to the United States in May, 1922.

Upon his return to Ireland 10 years later, Gralton is at first reluctant to reopen old wounds, but believes that a recent Fianna Fail election victory heralds a more progressive era for Ireland, and so agrees to rebuild the hall to provide for the community a place where, “we can think, talk, learn, listen, laugh and dance.” Poetry appreciation and painting classes resume, boxing lessons are offered, political views are exchanged and debated and dances are held, aided by the jazz records, gramophone and new dance steps that Gralton had brought back from New York.

Jimmy’s optimism, however, soon proves to be misplaced. Although the head of the new government, Eamon de Valera, had once stated that, “Labour deserves well of the Irish people: the Labour man deserves the best the country can give”, he is forced to abandon his principles in the face of political realism. In the decade following the Civil War, while Ireland’s economy had stagnated, the country had become increasingly authoritarian and culturally repressive, with the ideology of the Catholic Church influencing everything from education to the censorship of literature and music and the policing of immodest fashions. Threatened by “Red scare” smears from the conservative establishment and with potential violent opposition by the fascist Army Comrades Association (soon to become the infamous “Blueshirts”), de Valera and Fianna Fail sought to reassure the Catholic Church of its adherence to Catholicism and capitalism. In the words of Ken Loach the first thing de Valera did was to “seek the approval of the Church and get them on his side.”

At a local level, too, the Church began to flex its muscles in opposition to any perceived challenge to its authority. Operating outside of the Church’s moral control Jimmy’s hall becomes the focus of the suspicions of Father Sheridan, the local Parish Priest, played by Jim Norton. History begins to repeat itself as Sheridan reads out from the pulpit the names of those seen attending dances and condemns Gralton and his hall. “There is something evil hatching in that hall”, he pronounces, “Gralton and his crew are atheists”. To Father Sheridan, Jimmy’s jazz records and their “rhythms from darkest Africa that inflame the passions” threaten the “Los Angeles-isation” of Irish culture.

As pressure from the Church and from powerful landowners and their supporters mounts Gralton asks, “Why is an old tin hall so dangerous?” The answer is that the hall is the embodiment of the free spirit of the people. It is a challenge to the status quo. The hall and Jimmy Gralton, are guilty of a dangerous crime, the crime of enabling the people to think and act for themselves. There was clearly no place for a progressive man like Gralton in the “Priest infested backwater” of early 1930s Ireland and so he had to go – deported on the flimsy excuse that he had previously been granted American citizenship. Although Loach attempts an upbeat ending with the local young people defiantly proclaiming that “We won’t stop dancing, Jimmy!” the sad truth is that Ireland was forced to endure many more decades of Church-controlled censorship and repression.

The above description may suggest that “Jimmy’s Hall” is yet another example of dour, self-indulgent, breast beating from the political left, but Loach and long-time collaborator, writer, Paul Laverty, have crafted a film containing much charm, warmth and humour. There are similarities with another film about a “Yank” returning to Ireland during the interwar years, John Ford’s, “The Quiet Man”, not least because of the sumptuous photography by Robbie Ryan and the accurate period details of the production design by Fergus Clegg and the costume design by Eimer ni Mhaoldomhnaigh. Like John Ford, Loach has given many roles in his film to local inhabitants of the beautiful Leitrim and Sligo countryside where the film was shot. This has helped create a genuine feeling of community that is such an important aspect of this story and also contributed to the naturalistic acting style which is a hallmark of Loach’s films.

This would not be a Ken Loach film if it did not contain several political set-piece debates but they are staged with a light touch and are not as long-winded and ponderous as similar set pieces in “The Wind That Shakes the Barley” and Loach’s earlier “Land and Freedom”. There is also a surprising and refreshing view of the United States in “Jimmy’s Hall", which is frequently missing from many films made by European left-wing directors. America is seen as the home of progressive ideas. It is exciting, subversive, slightly dangerous and exotic; everything that rural, 1930s Ireland is not.

“Jimmy’s Hall” is rumoured to be the last ever fiction film that Ken Loach will direct. If so, then that is indeed a great loss. The film industry needs people like Loach who will push to tell unfashionable stories like that of Jimmy Gralton and who will strive to challenge received opinions. It needs people like Loach whose championing of individual liberties, criticism of injustice and compassion for the underdog shines through in every film he makes.