I just want to let you know about my newly composed work "The Torch Still Burns Brightly" which is about John F. Kennedy. I have set his words to music and set music to aspects of his life. This will be performed by Cantando (Chamber Choir: Director Órla Barry), the ensemble A Company of Friends (Violin, Cello, Oboe/Cor Anglais, Piano and Uileann Pipes), Soloist Aisling Kennedy (Soprano), narrator Brian Molloy and the Symphonic Wind Band of the Rathfarnham Concert Band Society. I will conduct the world première in the Civic Theatre, Tallaght, Dublin on Saturday 22nd March at 8pm.

One of the movements is "John Fitzgerald Kennedy - The Torch Still Burns Brightly" which was commissioned last year by Council and People of New Ross to mark the 50th anniversary of the passing of President Kennedy on 22nd November. The world premier took place on the quayside at New Ross where I conducted a large group of local bands. Five days later I conducted the work with other musicians in the National Concert Hall, Dublin. For its place in this new show I have arranged it with Solo Uileann Pipes accompanied by the Symphonic band. The Soloist will be Mark Redmond from Gorey County Wexford one of the rising stars of Uileann Pipe playing. He is only one of an array of brilliant musicians I will conduct in this homage to John Fitzgerald Kennedy.

President Kennedy was fond of quoting George Bernard Shaw. As he said in the Dail (The Irish Parliament) on his visit here in 1963 -"George Bernard Shaw, speaking as an Irishman, summed up an approach to life, 'Other people, he said, see things and say why? But I dream things that never were and I say, why not?  And so it is with me, that spirit of JFK still lives on.

If you know anyone in and around Dublin town who might be interested in this inspiring musical evening perhaps you would let them know. 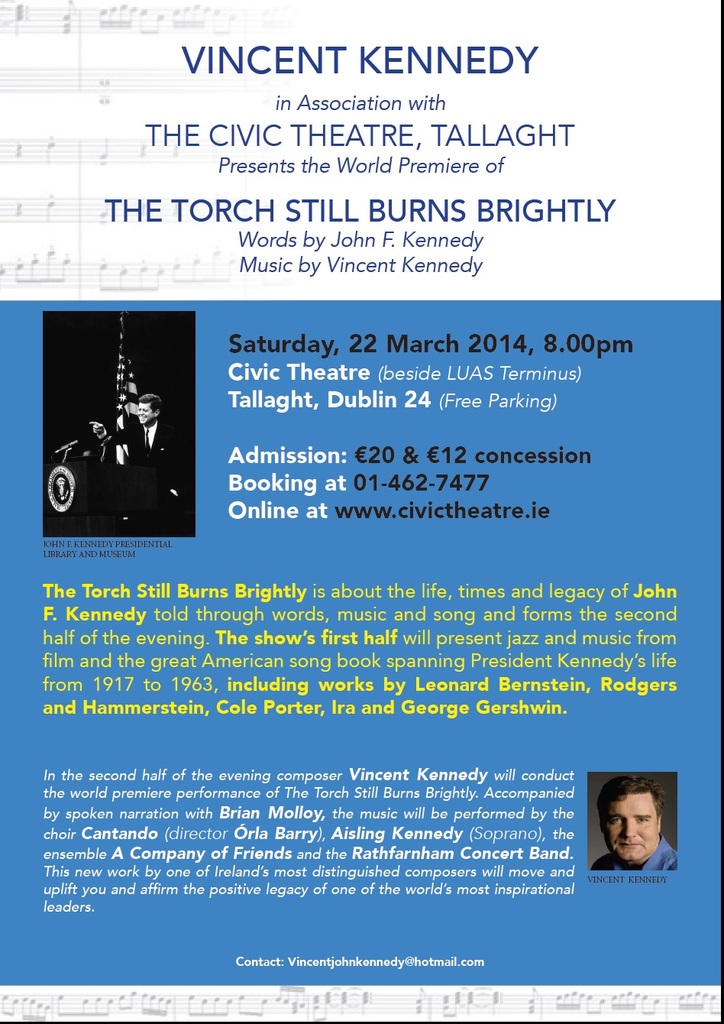