(First published on 3/22/12) Irish Music Forever is run by devotees of Irish heritage based in Nottingham, England, including Pat Kehoe. He and his colleagues plainly love Irish songs, music and all aspects of the Irish cultural experience. Like millions of the estimated 70 million people of Irish ancestry scattered across the world, they are from Irish families who had to emigrate from Ireland during the last 50 years in search of work and opportunities. Most of them found work and a new life, but retained a huge affection for Ireland and its ways. TheWildGeese.com’s BelindaEvangelista posed Kehoe some questions about how he came to embrace Irish tunes while growing up in England.

TheWildGeese.com: What was your reason for leaving Ireland? Pat Kehoe (left): I was only four when I left Ireland. My father was in the Irish army during the war [World War 2]. When he was “demobbed” (demobilized), he couldn’t get a regular job at home in rural Wexford, so he answered an advert in the Irish papers from the British National Coal Board. They wanted men to work in the coal mines in England. Dad left Ireland in the early 1950s and his family finally joined him in 1959.

TheWildGeese.com: How many years is it since you left? Do you still miss it?

Kehoe: It’s more than 50 years since I left Ireland and, yes, I do miss it. I also miss the sense of what might have been had I been brought up in Ireland. Most of my memories of Ireland now are from when we went back there on holiday. It meant I was able to keep in touch with friends and family, and I am still in touch with many of them today.
Ireland has changed beyond all recognition since Dad left in the 50s. He left a sleepy agricultural country where they still used the ass and cart, as he used to call it. Now when I go back I see a sophisticated high-tech economy. The transformation is amazing.

I still go back there quite regularly, both to visit family and just to generally experience and enjoy the country of my birth. It can seem odd at times because, having been brought up in England, I 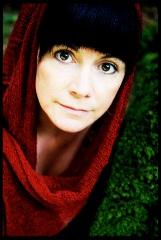 obviously have an English accent. It means that when I go back to Ireland, I am often regarded as being English and yet, when I am in England, I am often regarded as being Irish. (Right: Cathy Jordan of Dervish) It can make you feel that you don’t quite belong in either place. I think a lot of Irish people living abroad feel that way. It’s something that Shane MacGowan of the Pogues has grappled with for many years.

TheWildGeese.com: What was the reasoning behind Irish Music Forever? Does it fill a “hole” in your heart.

Kehoe: Yes, I suppose it does fill a gap in a way. I first got into Irish traditional music when I was about 16. I played guitar and sang a bit, but it was mainly [Bob] Dylan and the Beatles, etc, quite predictable. Then I discovered some old records by The Dubliners and The Clancy Brothers and started learning those songs.

I remember sitting in my bedroom belting out songs like “Whiskey in the Jar” or “Spancil Hill.” My dad used to come and look at me in amazement. He couldn’t believe I wanted to play that music. To him, they were just old-fashioned songs from his childhood and seemed out of date. He couldn’t quite understand that I as a young lad brought up on the Beatles would want to play them.

But there were several reasons why I liked them. For a start, they
were wonderful songs, but more importantly, they were a direct link to my culture, and I felt a sense of engagement. This was particularly so when learned songs like “Boolavogue,” (Left, Father John Murphy, hero of "Boolavogue") which is about a battle that took place close to my home in Ireland.

Setting up the website is a way of keeping in touch with that culture. It’s also a way of contributing something to that culture. The site sets out to provide background information to Irish songs. The songs are great, of course, and speak for themselves, but I think people enjoy them even more if they know a little about the story behind them and how they came to be written.

TheWildGeese.com: Do you see a need for preservation of Irish music?

Kehoe: I do think Irish music should be preserved, but I don’t think there is a problem because it’s perfectly capable of preserving itself. I think it has survived this far not so much because people want to preserve it, but simply because they recognize that it is so good that they want to play it and listen to it.

It may go in and out of fashion, but it’s always there. The latest fashion I suppose is the way that traditional Irish music is being “glammed” up and packaged by groups like Celtic Thunder and Celtic Woman. They may have attracted some criticism that it’s all a bit too showbiz, but they’re polished performers and they’ve brought Irish music to a new audience that may never have come across it otherwise. I think a lot of those fans then go on to enjoy more traditional or “authentic” Irish music.

There’s room for everyone, and it’s good to have such a variety in Irishmusic. Its inherent quality is so strong that it can be adapted in several ways and still sound wonderful.

Kehoe: I think it does. There are some great young performers out there, and they do great credit to their country. The power of music and culture should never be underestimated. I was reading Tony Blair’s biography recently, and he referred to the Northern Ireland peace initiatives that took place under his Government and that of John Major in the 1990s.

Blair referred to the way that the Irish were coming to be seen differently in the UK at that time. In the 1980s, the image of the Irish in Britain was not all that great because of the troubles in Northern Ireland. By the 90s, Blair said he noticed a change in that image. The Irish football team was performing wonders under the guidance of their English manager Jack Charlton, and Irish pop groups like U2 were dominating the UK charts. There was a buzz of excitement about Ireland and a more relaxed and welcoming attitude to the Irish in Britain.

Blair felt that cultural shift was one of the factors that made the Northern Ireland peace agreement possible -- so hats off to U2 and all the other Irish cultural icons. TheWildGeese.com: What is your all-time favorite Irish song, and why? (right: Wallis Bird)

Kehoe: This is an impossible question because there are so many great songs to suit every occasion and emotion. “Carrickfergus,” “Boolavogue” … I don’t know. If you force me to choose, I’ll say “Raglan Road” because of the way it blends a great traditional tune with wonderful new lyrics -- but I’m not very consistent. If you ask again tomorrow, I’ll probably say something different.

Kehoe: Definitely. We want to look at everything from the early O’Carolan material to the modern day. It’s a mammoth task but well worth it because the music is so rich.

Kehoe: We plan to add so much more to the site, but we’re doing it in our spare time. It means progress is not as fast as we would like, but we’ll get there. We expect the site to at least treble in size over the next 12 months.

We’re also interested in hearing from people who would like to write about Irish music and culture so we can get as wide a perspective as possible.

A fascinating interview - and a quick glance at my CD racks show the names of many of these Irish musicians - I cannot see Irish music as such ever dying, the lyrics and the essential music (however 'modified') will ensure that the appeal to both Irish and international listeners continues unabated.