IRISH MINUTE: Memories of Christmas During ‘The Big Snow’ in Mayo Maura Mulligan was first-born in a family of six siblings, children of farmers who ran the family farm in the rural village of Aghamore, County Mayo.  After immigrating to the United States and working for telephone companies and even trying life in the convent, Maura took up memoir and fiction writing 10 years ago.   Her memoir "Call of the Lark" about her childhood in Ireland, immigration to America and her time spent in a convent is due from Greenpoint Press in 2012.  For this Christmas week, Maura took some time to talk with TheWildGeese.com’s Dan Marrin about memories of Christmas on the family farm.

TheWildGeese.com:  Tell me a bit about the farm on Aghamore.

Maura Mulligan: There were several fields between [our farm] and the next house, two acres between one house and another.  It could be very lonely if people were on their own, but when I was a child, people would visit each other in the long winter nights.  We did not have television then, of course, or running water or electricity.  Some people had a radio, but we did not.  We did have a gramophone, though, so some people would come to our house to listen to songs.  It was a whole different world.

WG: I read a piece from IrishCentral.com from 2009 where you talked about your childhood memories of Christmas in Ireland.  What was Christmas like in your house?

Mulligan:  In that time — the 1940s when I was a child — we didn’t have much money, of course ...  So … I don’t really remember getting any exciting gifts.  You’d always get something small -- just something that was necessary, gloves, socks.
You got in your stockings, maybe, an orange and a few sweets, a small toy or a pencil or something like that. Oranges were very unusual, because they only came around at Christmastime.  If you got an orange in your stocking, it was a big deal.

WG: You said in that Christmas piece that December 26, St. Stephen’s Day, was even more of a joy than December 25. Mulligan: Yes, absolutely because of the Wren Boys.  I remember most of all [when they came] the year of “the big snow,” the blizzard of 1947 — all you could see was this white wall on all sides of us. When the Wren Boys came, they’d come calling to every house in these bright colors.  They were all dressed up with ribbons, and they disguised their faces and looked unrecognizable until they started singing and dancing.  Then we’d start to guess who they were.  They weren’t just boys either that did it -- they were called “boys” but there were plenty of girls who did it.  Eventually, my sister and I joined them, as well.

In my grandfather’s time, the wren was a bird that would be killed and carried on a holly branch around from house to house.  He couldn’t tell me why they did it — it seemed pretty brutal, and that stopped eventually, thank goodness.  But the practice of going around singing and dancing from house to house continued.

Wren boys would come from different villages; sometimes they’d come from as far away as five miles.  They’d start very early in the morning; you could hear their tin whistles in the distance.  Then as they came closer, it got more and more exciting. 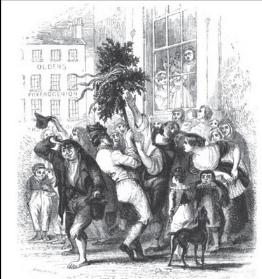 When my mother would open the door to them, it was just the most exciting time.  They came every year, but I remember that blizzard year most of
all.

(Editor's Note: This illustration, titled "The Wren Boys," depicts the Christmas tradition of people processing with the bodies of
wren birds attached to a bush. It is from the book "Ireland: Its Scenery and Character" by S.C. Hall; illustrations by Daniel Maclise, London: Jeremiah How, 1841)

As a Wren “boy,” you’d spend days preparing what you’d wear, and then you got money or treats, depending on how good you were at singing and dancing, sort of like Halloween.  Some musicians were quite accomplished and would get more: if you didn’t know how to play music, you’d take a comb and put a piece of newspaper against it and make a sound.

WG: Almost like taking blades of grass between your fingers to make a whistle?

WG: What kind of songs would they have been?  Traditional carols?

Mulligan: The Wren people would sing whatever they’d like, not necessarily Christmas carols, but whatever they thought they were good at.

Mulligan: No, no, no one sang church hymns except in church.  [laughs]

Maura Mulligan’s memoir, “Call of the Lark,” will be published by Greenpoint Press in the spring of 2012.  More of Maura’s memories and writing is available on her website. WGT

DAN MARRIN Is a New York-based correspondent and producer for TheWildGeese.com.