3,000 Quakers Help the Irish During The Great Famine

During Ireland's Great Famine 3,000 Irish Quakers contributed their time, money and influence to alleviate the suffering of those around them. The Pim family were among them.  This is another installment in our ongoing series about this benevolent family from the Religious Society of Friends.

In trying times of crisis, such as flooding, fire, or famine, there are always common men and women who step forward to offer succor.  The services they perform elevate them from the level of common to that of uncommon.

Joseph and Jonathan, like myself, are descendants of John Pim and  Mary Pleadwell.  John and Mary were converted to the Society of Friends by William Edmundson before 1650 in County Cavan.


Joseph and Jonathan were two of an estimated 3,000 Irish Quakers to provide relief during An Gorta Mor (Irish for "The Great Hunger."   At a meeting with his Friends, in November 1846, Joseph proposed that the Society form a Central Relief Committee, operating out of Dublin, to feed as many of the starving Irish as possible.  Everyone in the room agreed to the proposition, and second cousins Joseph and Jonathan were chosen as joint secretaries.  There would be no religious strings attached to the services they would render.

Both Joseph and Jonathan were men who loved Truth, improved their natural talents, sought to do good, and were astute businessmen, as well as devoted and loving husbands and fathers.  Joseph had retired from the family business of tea and coffee shops in order to devote more of his time to his family and the Society.  His contemporaries described him as a soft-spoken man, a great listener, a dispenser of wise advice, and someone who truly loved his Lord.

Jonathan, much the same kind of man as his cousin, was the owner, with his brother William Harvey Pim, of the Dublin firm Pim Brothers & Co., drapers and textile manufacturers.  Jonathan  would become the first Irish Quaker to sit in Parliament (1865-74).

Coordinating efforts with a relief committee (CRC) established in London, they worked closely with their co-religionists in America, raising funds and keeping the world aware of the desperate situation in Ireland.

The relief efforts of these Quakers, both men and women, saved thousands of lives.  They purchased, at cost, 294 copper steam-vats from Abraham and Alfred Darby, a Quaker company in Liverpool, which refused to allow them to pay full price. These boilers were for cooking a soup, called “stirabout,” a mixture of rice and maize from America.  The vats were set up in workhouses and other facilities throughout Ireland. Quaker women opened schools in Ireland and taught practical subjects, such as reading and writing, lace making, quilt making, and net mending.  They also worked in soup kitchens, distributed clothing, and nursed the sick and dying.  Over a year’s time, they distributed over  £200,000 in relief aid. 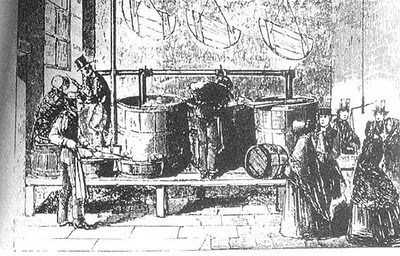 Fifteen Quakers died from causes related to the famine, among them Joseph Bewley, who literally worked himself to death at the age of 56.  Jonathan Pim collapsed from overwork.  In a letter to his brother James, Jonathan wrote:  "Now the lives of thousands are at stake.  The people must be kept alive, who ever pays for it.”

Quoting wikipedia,  "Jonathan Pim (1806–1885) was a founding member of the Dublin Statistical Society and president for many years. During The Great Famine (1845-1852) he was noted for offering relief to those who were suffering. He wrote Condition and Prospects of Ireland and Transactions which appealed for radical land reform in Ireland. After the famine, he bought an estate in the west of Ireland for the purpose of benefiting the tenants. After the first Irish Land Act was passed, he swiftly gave the tenants the opportunity to own the land."

The legacy left behind by these uncommon men and women, 'Friends' in the finest and truest sense of the word, blessed countless lives during and after The Great Famine. For in saving lives, these unassuming rescuers allowed thousands, eventually millions, of Irish and their descendants to not only survive but thrive, in new lands as emigrants or in their native land in the coming decades of tumult. As have done martyrs through the centuries, who gave their lives for the causes in which they believed, these Quakers lived up to the teachings of the Bible, in which they so fervently believed.  As Jesus himself uttered, as handed down through the King James Bible (Cambridge Ed.), "Greater love hath no man than this, that a man lay down his life for his friends."

ABOUT THIS BLOGGER:   Susan Potts Kimura graduated from Brigham Young University with a degree in English and a minor in history and was a genealogy researcher for a genealogy firm in Salt Lake City.   She is currently an elementary school aide working with slow readers.