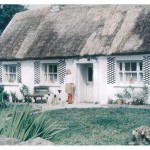 In 1965, my father, at the age of 60, decided it was time to find his Irish roots. The only problem was that one of his daughters was to be married late that summer. My mother declared he could go, but to give her some relief, he would have to take their youngest child with him, which was their 11-year-old daughter. This is how I came to ride shotgun -- on the wrong side of the road -- throughout Ireland in the summer of ‘65 while my father relentlessly searched for his Irish roots.

Today it is easy to find a summer holiday house to rent in Ireland with a few clicks on the internet. But back in 1965, the only resource available to Pop was The Irish Echo – a tabloid printed to serve the Irish-American community in New York City. The last page had a “Houses to Let” column; this was how my father found and rented, for the first three weeks of August, a thatched roof cottage in the middle of a bog in County Galway, with neither running water nor electricity. Pop was not just going to find his roots; he would re-live them.

The cottage had a large central room with a bedroom off each side. Each room had an open peat fire; Irish summer nights can be chilly. The main room had a “loo” added on to the back, but it more closely resembled an outhouse to an eleven-year-old from New Jersey, so I used it as little as possible. My father quickly arranged with the landlord for a housekeeper, Evelyn, who would arrive by bike around 11 or 12, fix the “dinner”, tidy up, and then cycle away down the bog road till the same time the next day. Evelyn filled the cottage with herself and her engaging stories as she moved about the cottage preparing the dinner of boiled potatoes and onions over the open peat fire, using water from I-do-not-know-where.

There were two ponies which the landlord, Mr. Lynch, kept in the back field. Upon learning that I once took horseback riding lessons back in the States, Mr. Lynch, several of his eight children, and his bachelor brother, Tom, arrived the next day with a plan. The pony was saddled and a couple of old tires were stacked across from each other, holding a long pole across the bog path for a “pony-jump” – Mr. Lynch’s words. The pony had never actually jumped before, and all were very interested to see if I could get him to do it. I did, but that was a minor event compared to the crack (Irish for fun) of putting it all together with that crowd.

Mr. Lynch was not just in the holiday house business. He was also a farmer, and all his sons and daughters helped to “make the hay” on August evenings. As I had become friends with his two oldest daughters, who were my age, I was included in this activity. We were driven out to the field around noon, for there is no reason to start anything early in an Irish summer as there is light till nearly eleven o’clock. We three girls were given a corner of the field and directed by Mr. Lynch to rake the hay into the center of our corner. Tom then arrived to our corner and helped turn the hay into a haycock secured to its spot by a rope made of hay by Mr. Lynch. His daughters delighted in watching their “Daddy” do this; I delighted in all of them. Born and bred in New Jersey, I had no idea so much fun could be had while getting a good set of blisters on your hands. When I wasn’t riding ponies or making the hay, I was sitting shotgun in my father’s rented car eating Cadbury fruit and nut bars while Pop relentlessly searched for his Irish roots. He bought six Cadbury bars at a time just to hush me on these endless forays into the Irish countryside. His search for his mother’s people had not gone well, so Dad strategically switched to the paternal side upon hearing Evelyn’s story about an O’Dea castle down in Clare. Her directions to this shrine were to-the-core Irish; “Oh, just drive your fancy car down to Clare and ask anyone where the O’Dea castle is”. We asked farmers in their fields and women on their bikes how to get to the O'Dea castle, and proceeded down one-lane roads splattered with the remnants of the herd of sheep which had preceded us. I was certain we were lost when we finally spotted the ruins of a castle in the middle of a field. The entrance was boarded up, but we walked around it once or twice. We had no other information about this place other than that it was known as the O’Dea Castle, but this was not an issue for my father. I can still see him standing there, with his hands planted on his waist and a cigar planted in his mouth, looking up at the O'Dea castle. Clearly, he had found what he was looking for.

The Celtic Tiger has changed some things about Ireland. The house my husband and I rent each summer has a designer kitchen with appliances I have yet to have in my own kitchen. There are tony equestrian centers scattered about the country where you can rent a fine looking horse and gallop along deserted strands for the better part of a most memorable day. The O’Dea Castle is now the Archeological Centre of County Clare, refurbished and showing a video of all the battles between the O’Dea clan and anyone who threatened them. How my father would have loved that!

I return each summer, as some things have remained the same, among them Ireland's kind-hearted people and their inclination to the craic.

Great account Susan and you showed great patience on your fathers quest for lost ancestry. Clearly you enjoyed the experience. A bit like Don Quixote and his trusty servant. I too went to Boston and other places seeking my Kerry ancestors who had all left Callinafersy Killorglin circa 1880. I was helped by a very kind librarian who brought me to various repositories around Boston but to no avail. My wife was getting a bit fed up with the stubbornness of my pursuit but the silver lining was the field mouse I saw in the hallowed marbled corridors of Boston Library. This educated mouse certainly knew his way about and ran in under a cabinet. I was absentmindedly looking on the cabinet and luckily noticed it contained the telephone directories for Boston Mass.- several volumes. I went to the relevant volume and found a page full of Linehans, an incredible find. Taking the directory to the Librarian she obliged and I now have  about fifty or sixty names and addresses to communicate with via email. I have to revisit the Mail merge facility and get this job done soon. Incredibly the Linehan name was very prevalent in Killorglin and today none of this family exist there. It puts a new meaning for me on the Irish Diaspora. My big hobby is researching my family tree. Difficult as many Irish Catholics were not landed people especially 19th century. So a tip that paid off was to latch on to any exotic or 'foreign' name in the ancestral tree. So I came accross Cantillon. These were the first Cambro Norman family to settle in Ballyheigue Co Kerry in 1209. There is castle still standing there. The interest of the women in particular in our family tree soared, probably in the hope of finding a knight or titled person. This spike in interest has since abated but it gave me a new angle to researching local and international history. Some years ago our family went to Lettermore in Galway where there was a big old wrought iron chandelier and more importantly a semi open turf fire. Our children were intrigued by this and any other holiday homes we stayed in were sure to cause major friction if it didn't have a turf fire. so now we have installed a log burner which also burns turf in our own home but the family are beginning to scatter. hope you have a Happy New Year and good fortune in your family tree research.

Comment by Susan O'Dea Boland on January 10, 2016 at 6:14am
Michael
Thanks for your comments. It seems to be in our DNA to find our roots, as so many of us go down that road.
Susan

What a wonderful summer trip you had! Clearly it left you with detailed memories! I very much enjoyed reading this!

Thanks so much for the positive feedback. Many more memories have been made since. I still see the Lynch family when I return in the summer. Very special people!

Yay, Susan! And I think it's fabulous that you return to Ireland every summer. So very nice of you to share this account.

What wonderful memories you have!  Thank you for sharing them with us.

Thanks for the warm response. It is so good to have a place like Wild Geese where I find like-minded people!