The only Irish attraction to make Conde Naste Travel Magazine's "20 Most Beautiful UNESCO Word Heritage Sites" was County Antrims's Giant's Causeway.  The 40,000 basalt stone columns that stretch into the sea towards Scotland were formed, geologists say, by volcanic lava. But Irish mythology says the strange formations were the work of the hero Finn McCool, who built the causeway as a path to cross the Irish Sea and do battle with a rival Scottish giant.

Whatever the derivation, the Giant's Causeway is a scenic wonder that you can not only gawk at, but climb over and around as well. And that's what hundreds of thousands of visitors do each year,  after taking a short bus ride from the visitors' centre,  operated by the National Trust.  In addition to climbing on and among (weather permitting) the columns, there are hiking trails to the top of the impressive cliffs which tower over the causeway itself.

The visitors' centre also provides an informative and entertaining film, which outlines both of the conflicting accounts

of the causeway's beginnings.  You can also purchase Irish handicrafts and souvenirs at reasonable prices (the causeway is no tourist trap), and get information on  other attractions along the ruggedly beautiful coast of County Antrim.

Other nearby sites worth visiting include:

The Glens of Antrim:  Take a breathtaking ride along the coast, detouring into the nine glens, where you'll find lovely hidden coves, time-warped fishing villages, forests, waterfalls, and even the mountain where St. Patrick is reputed to have tended sheep while in slavery.

Carrick-a-Rede:  Here, you can walk, if you dare, across a rope bridge that spans an 80-foot chasm.

The historic village of Bushmills is literally minutes away from the  Giant's Causeway.  A great place to stay is the Bushmills Inn (www.BushmillsInn.com),  which provides one of the warmest welcomes you'll find in an island famous for hospitality.  Having a Bushmills double malt before a turf fire in one of the inn's cosy sitting rooms is only topped by the superb dining in the inn's acclaimed restaurant, where you can feast on Irish smoked salmon or succulent New Zealand lamb.

The Giant's Causeway and Bushmills are about a four-hour drive from Dublin,  mostly on modern highways ( called "dual carriageways" in Ireland).  If you decide to say in Belfast and tour one of Europe's emerging "hot" cities,  try the Fitzwilliam International Belfast,  a boutique hotel adjacent to the Opera House. While Belfast was for years considered "off limits" due to the sectarian troubles, with the current peace initiative, it's actually one of the safest places in Europe these days.

For further information on the Giant's Causeway and surrounding areas, log on to www.CausewayCoastAndGlens.com, or contact the Irish Tourist Board at www.Ireland.com. 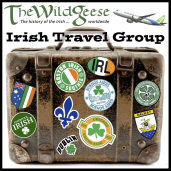 Comment by Michael Quane on January 8, 2015 at 6:48pm
It's the only Irish attraction, north or south, in Conde Nast's list of the top 20 UNESCO
World Heritage Sites, putting it on a level with such iconic destinations as Yosemite and the Galápagos Islands. That said, I realize this is subjective. The Cliffs of Moher actually have more annual visitors, about 950,000 to 750,000. But it's definitely the most popular site in Northern Ireland and well worth the drive from Dublin.

Oh yes - well worth the drive!